Hi everyone. Here’s my homily for TUESDAY 6/30/15 – FIRST MARTYRS OF THE HOLY ROMAN CHURCH – (readings can be found at usccb.org). We celebrated Mass at the basilica of Santa Chiara of Assisi.  Thanks for continuing to follow our pilgrimage “virtually” and joining in our prayers. 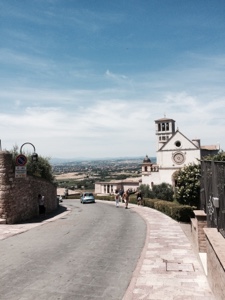 Not too long ago, Pope Francis had a pretty stirring homily where he was asking his listeners how courageous are we when we pray?  Do we seek a miracle?  Do we struggle or do we offer what he said are prayers of ‘courtesy’ saying to someone“Oh I will pray for you” say an Our Father, a Hail Mary and then I forget.”  I know I found the Popes words particularly uncomfortable because I recognize I struggle with that.  I hear a friend is ill, and I’m saddened, I’m frustrated – I bring it to prayer, but I might hesitate saying “Lord heal him”… because I know the diagnosis is bad, I know how often things have gone badly for others and so I find myself falling, failing and lacking courage.  It’s probably why one of my favorite Gospel quotes is the short prayer Yes Lord I believe – but help my unbelief (Mark 9:24)

On this 4th day of our pilgrimage – as we are at the half-way point – I think the Lord is challenging all of us to ask – how bold are we in our prayer?  How much do we trust the Lord?  Because we’re visiting places home to some pretty bold, prayerful people….  These visits coupled with reflecting on these readings, it becomes very obvious – God desires bold prayer.

In that first reading from Genesis – often times people can fixate on the aspects of the story where Lot’s wife being turned to a pillar of salt, or God reigning down fire on Sodom and Gommorah and how this is all part of that image people have of God in the Old Testament being a “wrathful God” (which isn’t true… there’s a whole lot – no pun intended – going on in the Old Testament including in this story, but I digress)

The thing to focus on from this story from Genesis is Lot.  Talk about being bold.  He know’s what’s coming – that God will destroy Sodom and Gomorrah.  The Lord commands Lot head for the hills, and what does Lot do?  He asks God to allow him to escape to Zoar.  Please Lord, it’s just a teeny, tiny town.  Please, just let me go there.  I imagine God saying, Really?  C’mon, Lot, really?  Zoar?  Sparing your life is not enough?  Can I get you a new pair of sandals for the walk?  Maybe you’d like some Twinkies for the road?  And yet, God grants Lot’s request.  And the town of Zoar is spared.  The power of the faith of one man.

Then the Gospel and the disciples.  They utter a bold prayer too.  But only seemingly as a  last resort – as the waves are about to overtake them, the sea is getting out of control, nature is unleashing violence and they are about to be wiped away – then they decide to wake Jesus with the cry “LORD SAVE US – WE ARE PERISHING” and instantly the storm ceases.  Yet they barely recognize what happened.  The seem not to notice how their bold prayer was answered as they stand in disbelief at how quickly things changed at Jesus’ command.

As we celebrate this Mass beneath this crucifix, where St. Francis of Assisi heard the voice of Christ call out to him, saying rebuild my house which has fallen into disrepair – we know how radically St. Francis’ life changed and his bold prayer, which became so common for him that the Lord reformed the Church, worked multiple miracles through this humble simple man who said yes to Him beneath this very cross.

As much as I would like to be like Lot and St. Francis of Assisi, I know that – on my best days I’m more like the disciples.  I know God is all powerful.  I’d love to change the world.  But I allow doubt to enter in – I’m only one man.  When I pray I want to expect something glorious, a miracle.  But I often feel timid or even cynical and that I’m just going through the motions of another unanswered prayer.

In this chapel, we’re not here to bask in a crucifix as if it were “the magic cross that spoke to St. Francis” but to be encouraged by what happened to him… how God used this image and symbol of his eternal, selfless love to get Francis’ attention.  Francis’ responsiveness to that moment was like Lot’s – and unlike his wife – he never turned back.  He might have been unclear at first what was being said to him as he literally started picking up stones and rebuilding a run down physical building.  But gently, the Holy Spirit used that time to continue to purify Francis’ heart, his intention to make him single minded in focusing on the Lord, listening for his voice, being attentive to his invitation and most importantly being responsive to Him.

The same is true for us.  We’re never going to have the boldness in our prayer unless we’re willing to be more trusting, more single minded – more sincere and authentic ourselves. When we do, then we will begin to see God spark and ignite a fire in you and me that will provide light to a needy world.  May Lot and St. Francis pray for each of us that we may begin to be as bold as they were.