Latest News
Home /Blog/WITNESS TO THE RISEN ONE

JESUS CHRIST IS RISEN FROM THE DEAD! ALLELUIA!  HAPPY EASTER!

Here’s my homily for Easter Sunday Mass.  The readings can be found at http://usccb.org/bible/readings/033113.cfm.  Thanks for sharing the blog on Twitter, Facebook, for all your comments and feedback.  God Bless & Happy Easter!!! Fr. Jim 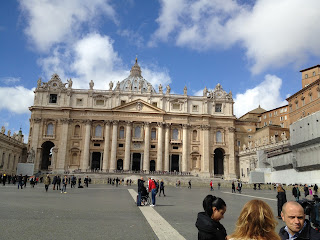 As some of you know, a couple of weeks ago I happened, by Divine Providence, to find myself in Vatican City. I was taking part in a pilgrimage that my friend from Sirius XM Satellite Radio, the “Catholic Guy” Lino Rulli, had planned for his listeners with the dates coinciding with the week I’d be “off” for Spring Break at the campus I serve.  Lino and I had been discussing the itinerary with Mountain Butorac, the owner and director of “The Catholic Traveler” (a company that specializes in Catholic pilgrimages) for months. The plan was to leave March 7th, arrive a day before the pilgrims, meet the rest of the group the next day, head to Assisi (a long-time dream of mine) for two days, then head back for the final 5 days in Rome.

That was before some unexpected news. Perhaps you’ve heard, Pope Benedict XVI resigned (or as Lino would say “quit”) on February 11th.As we were leaving JFK airport Thursday March 7th, there still had not been a date set for the conclave. So, our itinerary was completely thrown out – how could you go to Rome and not plan to be near St. Peter’s square when the conclave to elect the new pope was happening?  We had no idea, not even the slightest clue of how the week was going to turn out.   In a more pessimistic moment I said, “How much you want to bet we end up standing in that square all week, see black smoke – meaning no pope – and be on the road to the airport when they finally do elect the new one?” 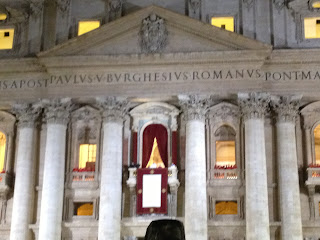 Thankfully, that didn’t happen. As we all know, the conclave started on Tuesday evening, and by the next evening, they had elected Pope Francis, the 266thPope – the 265thperson to follow St. Peter as the “rock” upon whom Jesus has built His Church.  What still is so amazing to me is how vivid my memories are of each and every day that we were in Rome. What we experienced. What we felt (physically, emotionally, spiritually). Having watched Pope Benedict’s election 8 years earlier at a bar with a friend as we were having lunch – the contrast couldn’t be greater for me. It’s one thing to catch glimpses, hear reports, read accounts of things. It’s quite another to be a witness to those things. Since coming home, family, friends, even people I only remotely knew were asking me about the whole thing. It’s not like I was giving them new information, people know by now that we have a new Pope . . . They know the details. But they know there’s something about talking to someone who has really been a witness to those things.

Which kind of tied into something even more personal in my faith life. People have asked me what has been the greatest thing, the most important thing, or the thing I’ve appreciated the most from these two trips to Rome . . . and it’s not been the spectacular sights, the incredible food, the beautiful people – the thing I’ve been the most awestruck by was how this city itself is filled with witnesses . . .  Or even that the city itself is a witness.   Witness to what? To what St. Peter says in the first reading:
We are witnesses of all that [JESUS] he did both in the country of the Jews and in Jerusalem. They put him to death by hanging him on a tree.  This man God raised on the third day and granted that he be visible, not to all the people, but to us, the witnesses chosen by God in advance, who ate and drank with him after he rose from the dead 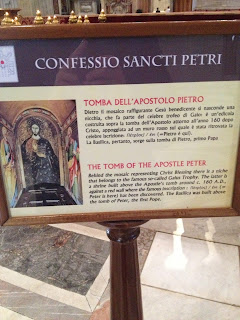 Because of St. Peter’s witness, because he would not recant that statement (even after being afforded the opportunity to, in order to save his own life) – this same St. Peter – who denied that he even knew Jesus three times when Jesus needed him the most on Good Friday – well, now I could see the place where Peter was crucified for that witness, I saw the graffiti left by the earliest Christians who identified his tomb writing, “Peter is here” as an early place of pilgrimage to strengthen them in their own struggles, their own persecutions, their own witness to the faith.

Because of St. Paul’s witness, because he would testify how he had been a devout Jew, one of the fiercest persecutors of Christianity who one day encountered the Risen Christ asking him, “Why do you persecute me?” That encounter completely turned Paul’s life upside down. He became one of the most zealous, important apostles – writing the bulk of the New Testament himself.  Because St. Paul would not cease to bear witness to the truth of Jesus Christ crucified and risen from the dead – I could walk the path St. Paul walked to his execution, see the place he was decapitated (you can buy chocolate right outside the Church at a gift shop there) – and I could visit his tomb where he is buried

I could see the Church where St. Bartholomew was buried, after being skinned alive as his punishment for his witness to Christ’s resurrection.

I celebrated Mass in the catacombs, an underground, labyrinth of sorts where the Early Church 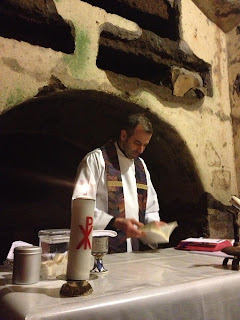 would secretly gather to do what we’re doing today – celebrate the Eucharist – which was also a place of martyrdom for thousands, including 16 Popes, and a burial place for over half a million of our brothers and sisters from the early Church.

No it’s not the frescos, the sculptures, the ancient buildings of Rome – but rather the blood of these thousands who happily, willingly, boldly went to their deaths because of what they had found, what they had witnessed – that the man Jesus who was crucified, was risen from the dead; that single most important event in human history is what makes that city – and our church, as a whole – so beautiful.

That’s what Easter is about – being witnesses to the Resurrection. That’s what makes this space beautiful as well . . . That you and I today, thousands of years removed from those historic events, 5,000 miles removed from those historic places, are still intimately connected to all of them, and always will be. That’s the beauty of this feast of Easter. The entire Passion, death and Resurrection of Jesus Christ isn’t just a story we’ve heard about, or know of, but something we experience here and now.  We’re witnessing it, here.  The Holy Spirit still awakens our faith as these sacred words are proclaimed . . . The sacrifice of Calvary, and the unfathomable joy of the empty tomb are made visible as Jesus Christ is made really present, Body, Blood, Soul and Divinity in the Eucharist.  That thousands upon thousands all around the world last night and in the weeks ahead will enter into the Church – enter into the life and death of Christ in receiving Baptism – or completing their sacraments of Confirmation and Eucharist – all this, because of the witnesses of so many around us.

I wish you and your families and very happy and blessed Easter.  But, more than that – no, because of that – I also wish you a share in the joy of the martyrs, in the joy of the saints, in the joy of Mary Magdalen when she encountered her Risen Lord (after mistaking Him for a gardener), in the joy of Jesus’ mother, Mary, when she encountered her Risen child (a mother receiving back her dead son – perhaps the greatest joy of all time) – I can, and I do wish you a share in all this joy because, by rights, it is yours – it belongs to everyone who has died to self and risen again with Christ; who have ‘put on Christ;’ and who, by Christ’s merit and redemption, are now offered the happiness which only He can give.