Latest News
Home /Blog/LOOKING FOR SOMETHING, SOMEONE TO BLAME 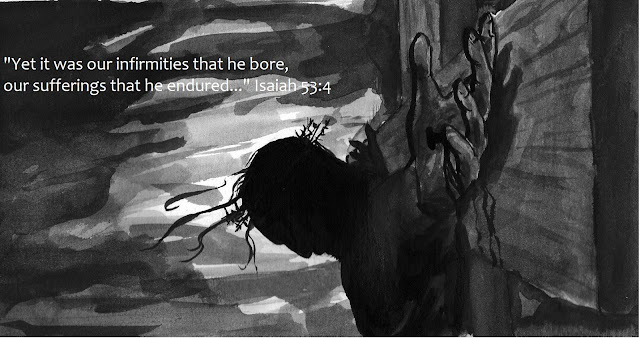 Hello everyone… here’s my homily for GOOD FRIDAY’S – CELEBRATION OF THE PASSION OF THE LORD.  The readings for today can be found at http://usccb.org/bible/readings/032913.cfm.  Thanks as always for your feedback, your sharing this blog on facebook, twitter and elsewhere.  God Bless.

We live in a somewhat fascinating time where science, technology continue to make incredible discoveries and advances that have done tremendous good.  There are genetic tests that can be done with relative ease to identify diseases that we might be susceptible to in order to begin prevention early.  The other day there was a story about a new computer chip that can be implanted in you to warn you (via your iphone) of an impending heart attack (wonder how much that app is going to cost).  We constantly seem to look to unlock clues about who we are, why this happens to us or that happens to us…even why we do the things that we do.

That’s why on initial glance, another headline and the story that followed that I stumbled upon the other day started out somewhat fascinating.  The Daily Mail (a newspaper from the United Kingdom) reported just a few days ago that scientists claim to have found a way, through looking at a brain scan, to predict whether a convicted criminal will end up getting arrested once again.  The report states that 96 male prisoners who were at the end of their jail sentences were studied before they were due to be released.  They scanned their brains with an MRI as the men were doing a variety of tasks and then “tracked” or followed these men for four years after.  The initial conclusion that the researchers came to was that those who had a lower level of activity in one sector of the brain were more likely to be arrested again after getting out of prison

What initially started out as an interesting finding started to worry me though.
How overly simplistic,
how easy,
how tempting could this become for us – for many in our society.
To simply reduce things to a brain scan.   Let’s just do an MRI,  look for a logical, scientific, empirical reason for bad, immoral, criminal behavior.  We can label people criminals and make them the boogey men of today.  Or on the flip side we can use it as a  defense I had no control over myself – my brain makeup made me do it.    This can very easily turn into a game where we attempt to lay the blame for the evils of the world on something or someone else.    The more I thought about it, it dawned on me that while this technology is new, this story, this game is anything but. Looking for something, someone to blame.

Just look at the Passion account we’ve just proclaimed.  Who’s at fault?  Who’s to blame?   We can approach the reading and look for possible defendants to try to “get to the bottom” of what happen

Judas seems the logical first target – after all he delivered Jesus up for thirty silver pieces.
But then again, he had to deliver him to someone, so
Caiphas and the Jewish Chief Priests are considered – they wanted him dead after all.
But then they had no legal way to do it (religious or secular law) and so
Pilate comes to mind.  Ultimately he was in charge, he could have stopped it– he knew it was wrong….
But as the guards lead Jesus off and nail him to the Cross, Pilate is said to be washing his hands of it, so in a sense we’re left with a bunch of roman guards, who like soldiers of other atrocities throughout history are judged guilty of just following orders.

This bizarre debate unravels.  As we’ve found “reasonable doubt” for each of these individuals, There’s commentators who would simply conclude that God wanted it this way.    What they are saying, (even though they don’t realize it) is that no one’s guilty… somehow the madness, the evil occurs – killing so brutally the enfleshment of Love… and as we sit uncomfortably with that notion, the argument that “God wanted it that way” morphes into saying “God the father has done this” “he allowed this to happen” or the conclusion to their question who’s Guilty of killing Jesus “God is guilty.”

It’s not as preposterous as it sounds.  It’s what humanity has been saying from that day in the Garden of Eden, as we read in Genesis – God said: “You have eaten, then, from the tree of which I had forbidden you to eat!” The man replied, “The woman whom you put here with me–she gave me fruit from the tree, so I ate it.”  The LORD God then asked the woman, “Why did you do such a thing?” The woman answered, “The serpent tricked me into it, so I ate it.”
It wasn’t Adam’s fault it was Eve’s;
It wasn’t Eve’s fault, it was the serpent,
it wasn’t the serpent – Why did God put that tree there in the first place – who’s guilty – God is Guilty.
And thousands of years later, it’s no different Who’s at fault?:
The guards of Auschwitz?
The husband cheating on his wife?
Lance Armstrong?
The physician giving lethal doses of morphine in a nursing home?
– everyone has excuses: I was following orders, I have uncontrollable needs and desires that must be satisfied; everyone’s doing something to get an edge on the competition, we must relieve the world of useless lives (or put more nicely, to end their suffering).   We have made it a sport of sorts to hear how someone will get out of their crime: My parents abused me, I was deprived, I was spoiled, it’s in my genes.  We go from that cycle to the philosophical question of “How did Evil come about” and then ask with all presumption: If God is all good and all powerful, then how do these evil things happen, how come he let’s these things occur – YEAH, that’s the question – once again, ultimately the conclusion comes: God is guilty.

Like rebellious teenagers screaming at their parents, IT’S YOUR FAULT, we find ourselves in the Garden of Eden reaching for the fruit.  We find ourselves in Jerusalem in the crowd that first Good Friday.  We might not have been the ones fastening Jesus to the Cross, but as the madness of that day happens, we find that we were there – we were part of the crowd convicting God.

The difficult truth is that Humanity is Guilty and We ourselves are Guilty: of the evils we commit on each other; of the manipulations of one another we masterfully do; of the bad choices we make; of the silence we hold instead of standing up for the truth.  And so Jesus hangs on the Cross.  And there’s nothing we can do to change that.

What we can change is ourselves.  Jesus’ death doesn’t have to be in vain.  The ultimate vindication is not simply to listen and talk about, but rather to live Jesus’ message of Love and Forgiveness .  That is what has saved us from our Father’s justifiable wrath.  That is what Jesus commands us to do.  He doesn’t emerge from the tomb with a list of people he needs to “settle a score” with.  That’s our looking to get even-culture mentality that does that.  No, for Him – His last words say it all – Father forgive them, they don’t know what they’re doing.  Can we Forgive like that?  Can we stop the cycle of Hatred and choose to Love?  Can we vindicate Jesus’ death by our lives?

As we embrace the cross, we’re confronted with these harsh realities & difficult questions once again.  Will we let the blame game continue?  Pretending we have no role, no responsibility in Jesus death? Or will embrace the Cross, seeing the Love of Christ looking to forgive us, calling us to begin again and responding differently?  There’s no brain scan that will be able to predict how we will respond…   Those are questions answered in our hearts and souls.   May you and I continue to open them, and to offer them in a manner worthy of Jesus’ selfless loving gift.