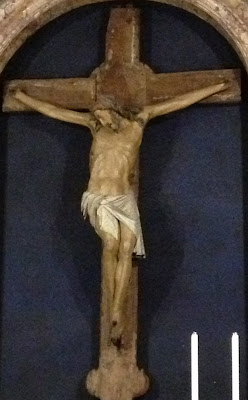 Hi everyone, here’s my homily for PALM SUNDAY OF THE PASSION OF THE LORD- MARCH 24, 2013.  The readings for today can be found at http://usccb.org/bible/readings/032413.cfm  As always, thanks for reading, sharing, and all your feedback.  My prayers for you and yours for a Blessed and Holy Week -Fr. Jim

HOMILY:
A true, and favorite story:
A retired priest was sitting enjoying the afternoon sun and suddenly saw the newly-ordained bishop of the diocese walking towards him.  “Father may I sit with you awhile?”  The old priest was delighted as he welcomed his distinguished guest.
“Father I’d like to tell you a story.  Some years ago a group of college students who had spent the afternoon drinking were walking past a little church.  Confessions were being heard inside and one of the guys came up with the idea to make a list of the worst things they could think of and confess them.  They thought it would be a riot to see how the priest would react.
One of the guys said – well since its your idea, put up or shut up I bet you $20 you won’t have the guts to do it.  So the first guy too k up the challenge.  A list of wild sins was drawn up and he went inside the confessional.  He came out a few minutes later brandishing a piece of paper… laughing as he said “PAY UP – HERE’S PROOF I’VE BEEN TO CONFESSION!
His friends asked him – what the paper was, so the guy said ‘it’s my penance’ – “well didn’t the priest say anything?” they asked.  “No – not a word as I went through that whole list of stuff – after I was done he just handed me the paper.”  “Well,” they asked “have you done the penance?”  “Don’t be silly- I’m not going to do it?”  The friends said “well we’re not paying you until you do your penance.
So he went into the Church and read the note.   It said kneel before the crucifix at the altar and repeat 10 times – All this you did for me and I don’t give a damn.  No problem the guy thought as he knelt down before the altar.  But he couldn’t do it – He saw the nailed hands, the pierced side, the infinite sadness in the Crucified’s eyes.  A half an hour later his friends wondered what had happened as they found him crying like a baby at the altar rail.
The bishop said to the old priest – I wanted to tell you that story because I was that young guy and you were the priest.  Thank You Father.
(Cardinal Jean-Marie Lustiger)

Each year, on Palm Sunday something unique occurs that does not happen on any other Sunday.  The Gospel is proclaimed by the entire congregation.  We each have a role in the Passion.  Not because it’s too long for the priest to do themselves or to make sure the congregation doesn’t lose attention as the lengthy reading goes on.    Quite simply this makes it personal for us.  It’s to remind each and everyone of us that because of our sinfulness – we each have a role, we each have a part, we each speak a line that brings about Jesus’ death on the Cross. Sometimes that line is shouted loudly and boldly screaming CRUCIFY HIM.  Sometimes it’s a line spoken subtly but just as destructively, mumbling“I don’t know the man” as we deny Christ.

In spite of those failures on our part as human beings from generation to generation, Jesus allows this to occur.  This onetime event of His Passion for the sins of all humanity is made present in this Word and on our altar in the Eucharist.  It’s God’s definitive and eternal response to humanity that no matter how cruel, how indifferent, how hurtful we can be to Him and to one another, He stretches out His arms in the most definitive act of love that the history of humanity has ever recorded for you and I.

The question we’re left with, kneeling before the crucified one, do we give a damn?