You know it’s an amazing week when the least dramatic thing is celebrating Mass at the tomb of Blessed John Paul II…which we are able to do this morning. 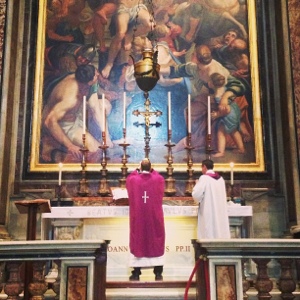 That’s not to say it wasn’t specials or moving, just that I don’t think I’ve ever gone through a week like this. A week ago we had no idea who the next Pope would be. Actually wew didn’t even know when they were going to start the conclave… Let alone would they have elected a new Pope by the time we left. It was so disturbing personally to be in Rome and to see the papal apartments shuttered – just one of many signs that we were in the Sede Vacante — the empty seat of Peter. That’s why it’s a little thing, but I was so happy to walk past St Peters Square and see this sight 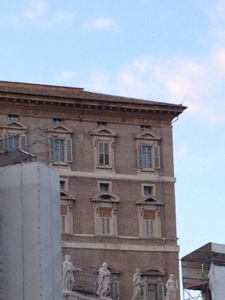 It’s amazing to me that a mere 48 hours since his election the reality of Pope Francesco has already sunk in for me. And it’s such a beautiful experience to see the effect it’s having on the city of Rome already. His picture is popping up all around town. I just heard a newspaper salesman saying to an English tourist – Papa Francesco – I’m so happy…

That about says it all.

After a mind blowing tour of the Vatican Museum and a very moving lunch where all the pilgrims were invited to share their stories, highlights, we had a rare afternoon off. It was so special just to spend some alone time in St Peters… To be able to go to confession there, to pray before the tomb of Peter again. To hear the angelic voices of a choir praising God as a Mass in Latin was being offered.

As Peter once said to Jesus “Lord, it is good to be here.” 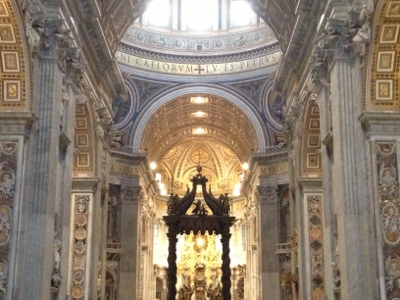 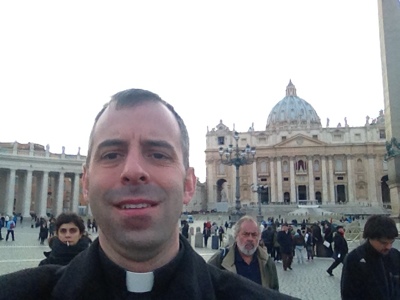