Simply overwhelmed. I have never experienced something like this and Right now it’s just streams of consciousness

– the square of St.Peters Basilica, filled 3 times for 3 hours each time with tens of thousands (and hundreds of thousands of people) standing in pouring, cold rain… Praying, singing and waiting for news.

-the sight of white smoke… But, still doubting and waiting for it to turn black, followed by the massive bell of the basilica beginning to swing and swing until it would start to chime the glad tidings of HABEMUS PAPAm where absolute delirium broke out on the entire square

– the patient, eager anticipation to see who would emerge… Hearing an unfamiliar name Jorge Bergoglio followed by a very familiar one — Francesco (after Francis of Assisi – a Saint I’ve had great devotion to for years)… Seeing and hearing his humble, humble greetings -asking for our prayers for him before he imparted his first Blessing.

It’s all way too much to even begin to comprehend.

Thanks for the over 100s of emails, texts, messages and tweets… Yes that was me with our pilgrims on every news network imaginable (including TMZ… don’t ask me, I haven’t a clue). We were the third row from the barricade, dead center… An amazing view of some unbelievable proceedings.

Thank You to Christ the Supreme Shepherd, for raising up a new Peter, to continue to lead and guide the Church. Viva il Papa! God Bless Pope Francesco!!! 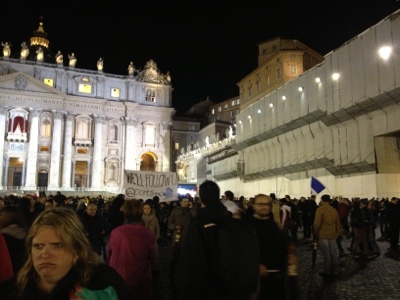 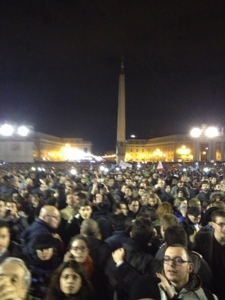 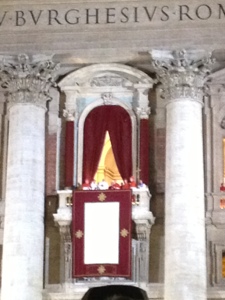 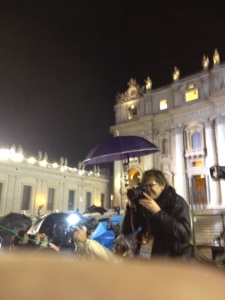 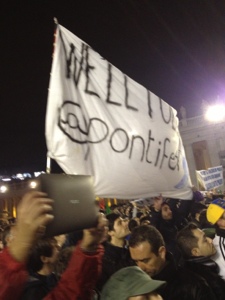