How to even describe celebrating the same Eucharist that our ancient brothers and sisters did thousands of years ago…in the place where they were martyred, buried, and despite that persecution, still gathered to share the Body and Blood of Christ week after week. Humbling to be sure. 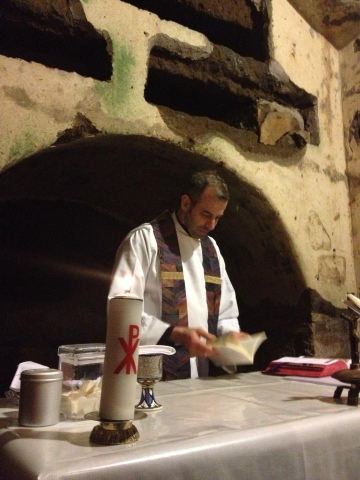 During the air war against Great Britain in 1940, the beautiful Gothic cathedral at Coventry was leveled. The congregation of the cathedral raised up in the ruins a cross made of two charred beams of wood. On the cross they inscribed the words: “Father forgive.” Two words, not three. It’s significant that they ommitted the word “them”. They might have said “Forgive those who did this horrible crime”. but they didn’t.

That eloquent prayer is limited neither to a people, nor a place, nor a time. It is written in the present tense, the active voice, forgiveness is a continuing plea, a constant process that embraces every time and people. The ruined cross is a poignant reminder of our human condition: We are all guilty of inflicting hurt and pain on others, we are all so absorbed with ourselves and our own needs that we are oblivious to the anguish and despair faced by others. We are all in need of forgiveness.

Coventry Cathedral has been rebuilt, but to enter the new structure, visitors must walk through the bombed out ruins of the original building, passing the place where the high altar once stood and where a charred cross now stands with the prayer of every generation: Father forgive.

Forgiveness and reconciliation are the cutting edge of the Gospel of Christ: To be a faithful disciple of Jesus is to be dedicated to the hard work of reconciliation. Its appropriate to pause and reflect on that Gospel message as we celebrate the same Eucharist our ancestors did in a place where they died, were burried, were persecuted for their belief in Jesus Christ. These walls, where there blood was spilled, where they were laid to rest seems to demand we take notice that its is the Love, the Mercy of God that differentiates, the animates, that changes us in the face of such hatred, such evil. Their cry is the same message of the cross at Coventry reminds us. Forgiveness is a work that is neither limited to a time nor place, nor conditioned on any set of circumstances, nor offered only to certain individuals and people.

The work of forgiveness demands facing our culpability in hurting others, as the prodigal son must do in the midst of the pig sty, it requires our putting aside our own hurts and resentments for the ultimate goal of being reunited with those whom we are separated, which the older brother has great difficulty doing; and it calls for the balancing of reconciliation and healing rather than vengeance and punishment, the difficult path that the father walks between his two sons. May we dedicate ourselves to the hard work of the Coventry prayer: to forgive without vengeance, to humbly work to bring healing to those we have hurt, and to restore to hope and dignity those who have suffered at our hands.