Every so often, someone will ask the question: what’s the hardest part of being a priest?  From their reactions, they seem to have certain expectations of what they think the answer will be: Is it the promises made to remain chaste for life – forsaking having a wife and family of your own?  Is it the promise of obedience to the Archbishop – recognizing that any day the Archbishop could call and say “I need you to go to a new assignment” – and there’s an expectation that you would put aside your wants, desires and say “Yes” – for the good of the Church?

Thanks so much for stopping by to read my homily for CORPUS CHRISTI – THE SOLEMNITY OF THE MOST HOLY BODY AND BLOOD OF JESUS CHRIST -June 19, 2022, for sharing it on your social media posts and your feedback and comments…  I’m also grateful for all those who’ve asked for the audio version and share them as well at SOUNDCLOUD click HERE or from ITUNES as a podcast HERE.  May the Lord be glorified in your reading and sharing Sincerely in Christ – Father Jim

There’s some truth to those examples – and other challenges come to mind.  But over the last 23 years of priesthood – for me, the hardest part has always been the extremes that a priest can encounter just in the course of one day.  Being a part of one family’s incredible joy and then another family’s incredible pain in a matter of a few hours.

One Saturday I will never forget comes to mind.  Saturdays ordinarily in our parish were relatively manageable (compared to some other parishes) so when my pastor was away for the week, I wasn’t concerned about the fact that I had an 8:30 am Daily Mass for Saturday – a Nuptial Mass (a wedding) at 3:00 pm, confessions at 4:30 and the Vigil Mass for Sunday at 5:30 pm.  Sure it was a bit loaded of a day, but as still a relatively young priest, I thought I could handle it.  The Daily Mass and Vigil Mass were something that was familiar by that point (even with a group of Confirmation kids coming to the 5:30 mass for something they needed to do); I was excited to celebrate the wedding Mass with the couple I had been working with for over a year.

What I didn’t expect was a funeral coming in that Saturday morning.  The note was posted on the bulletin board on Wednesday evening that the funeral director had called to arrange a funeral Mass on Saturday at 10 am.  At first, I was thinking if it wasn’t someone I was very familiar with that perhaps I could get another priest to cover the funeral.  As it turned out it was a 25-year-old woman whose name didn’t register right away – and then I realized it was the daughter of a couple who were regular, faithful parishioners.  In the 3 years I had known them, I never met their daughter (or even knew they had a daughter for that matter) Only with this sad news did I learn that she had suffered from drug addiction, and had been in and out of rehabilitation facilities and programs – but tragically had not been able to ward off those demons as she died from an overdose.   In talking and meeting with the family, it was obvious that they wanted me as their parish priest to celebrate the Mass.

Going into that day, I thought I was prepared.  I had my homilies printed out in different colored folders, that I had triple-checked (definitely wouldn’t want to mess those files up and bring the wrong one to the wrong Mass) I had altar servers assigned to help throughout the day and parishioners to assist whether it was just to help clean up from one celebration and set up for the next.

Emotionally I couldn’t have imagined the challenge the day proposed.  Seeing a family devastated by a tragic loss and a few hours later families (with similar aged young people) gathering to celebrate the joy of uniting a husband and wife… confirmation kids coming to the 5:30 PM Mass for their project that was part of their formation process. 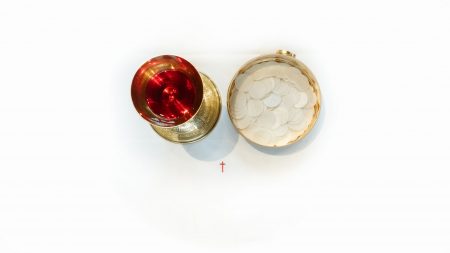 It was during that last 5:30 pm Mass that I had a spiritual revelation that has never left me.   It was as we were preparing the altar, for now, the 4th time, and I saw parishioners gathering again to bring the bread and wine up the altar that it clicked that I had seen this happen 4 times in this very Church, to very different congregations.  First to a group of mostly elderly parishioners who faithfully attend Mass every morning; then to a Church of people – some stunned, some numb in grief; then to families filled with joy as well as fear as they watch two young adults make one of the biggest steps in their lives – to now at the end of the day, 300-400 ordinary parishioners ranging from newborns to 80 somethings gathering together as they did week after week.   In some ways, they couldn’t have been more different.    Yet they all came to the same altar.  They all came, as they were, looking to be fed with the Body of Christ.  And I realized feeling somewhat frustrated, because:

That Eucharist I wish I could say instantly removed all pain and grief for the one family.

That Eucharist I wish I could say just as miraculously transformed everyone’s “ordinariness” into something “extraordinary” as bread and wine becoming Jesus’ body and blood did.

But sadly that wasn’t the case.  People still sobbed.  I’m unsure of what happened to that couple the days, weeks and years since they left after they got married and moved out of state… and taking a look around during that 5:30 – despite my best efforts, some people were yawning and didn’t appear to have changed much during that Mass.

But I realized those were my own expectations that were messed up – and I walked away with a new appreciation.  What everyone had in common; what everyone desired – and very personally what I knew to be true at the end of that long day – what had sustained me, and nourished me – was Jesus’ very presence in that Eucharist.  That in all those moments throughout the day He himself fed us with his very flesh; He himself quenched our thirst with his very blood.   It was Jesus’ presence, and His presence alone that every group of people desired on some unspoken level.  It was Jesus Himself that would be with one family in their darkest, most painful moment – and that He would remain with them every day, as they tried to come face to face with this loss in their lives.  It was Jesus Himself that was the guest at this Wedding Feast – who would remain with that couple in good times and in bad, in sickness and in health – all the days of their lives.  It was Jesus Himself who made the ordinary extraordinary and that daily, weekly nourishment would impact and change the lives of every soul who welcomed Him, received Him – really consumed Him and allowed Him to change their very lives.

The Challenge for us on this celebration of Corpus Christi, where we rejoice, celebrate, and reflect on this gift, on this mystery, is in the midst of our daily struggles, in the extremes of life that all of us inevitably encounter moving from joy to sorrow and sometimes monotony in the day to day is to look to Jesus presence in the Eucharist to transform us, to guide us – forcing us to do as he does for us: to lay down our lives, to give, to share… to in fact love Him as He loves us… to make His real presence real in the lives of others.