With the viral pandemic, shutdowns, and all the insanity that is still hard to believe has occurred over the last two years, on that list of things to get used to has been “live-streaming” Mass.  At the Newman Center at Montclair State, in March of 2020 when everything first started, we had this unique experience.  First off there were four FOCUS missionaries living in apartments at the Newman Center with me so we were in effect quarantined together.  And there being a bit more tech-savvy explained to me how we could easily “live-stream” everything with our students with our iPhones and iPads.  So within days, we were basically doing all of our regular programs, bible studies, meetings, as well as Mass and Eucharistic Holy Hour online with our students, to try to keep some sense of normalcy for all of them, and truth be told, for ourselves as well.  It was helpful in a lot of ways – but obviously far from perfect. The quality wasn’t always the best.  You’d have wifi issues and such.  But when confronted with nonstop negative news and orders of what you couldn’t do, this was something.

Thanks so much for stopping by to read my homily for SIXTH SUNDAY OF EASTER -May 22, 2022, for sharing it on your social media posts and your feedback and comments…  I’m also grateful for all those who’ve asked for the audio version and share them as well at SOUNDCLOUD click HERE or from ITUNES as a podcast HERE.  May the Lord be glorified in your reading and sharing Sincerely in Christ – Father Jim

One thing I didn’t expect was getting an “online” audience that was at times in the hundreds and at our peak even thousands of people tuning in.  It was hard to believe that we were one of the first to be offering live-stream Masses and that people were finding us, sharing us all over the world.

With much of the craziness of those worst of times behind us, we’ve dropped a lot of our live-streaming.  For one, our college students are “zoomed out” with all the virtual stuff.  And we know that in our weekly events or bible studies, it’s awkward to have some in-person and some online.  In a pinch, if there’s an outbreak or something – or now during the summer months when they’re all far from campus, we might revert to it just to keep connected.  But we try to keep away from doing it.  The only thing that we continued to live-stream on a regular basis during the semester was our Sunday Night Mass.  Honestly, I’ve been really conflicted about it.  Because I didn’t want to continue to encourage people to simply watch online.  It’s not the same as being here in person.  It’s not meant to be an acceptable option or alternative to being in person.  Especially as Catholic Christians- Sacraments are moments where we encounter Jesus Christ real and present among us… “outward signs instituted by Jesus Christ to give grace” as some memorized.  Sunday Mass is something as Catholics we’re obligated to attend – not log into. But I also knew that there were some who were still incredibly afraid and were very limited in going anywhere or doing anything.  And some of our students actually had family members who are homebound and enjoyed the live streams, so I didn’t want to be insensitive to those legitimate things, or when some of our students ended up being ordered to quarantine because of exposure or something for them to feel completely disconnected.  So we’ve continued them through this past year.

One regular “online-congregant,” said to me they noticed something peculiar about our Sunday Masses.  The first was that every week right after I receive the Body and Blood of Christ and before I start distributing communion I make an announcement.  I say “For those Catholics who wish to receive the Body of Christ, I invite you to come forward from the front to the rear and return to your seats by the side aisle.  For those who aren’t Catholic or if you’re not prepared to receive communion tonight and would like to receive a blessing, please feel free to come forward, and just cross your arms over your chest and I will be happy to give you a blessing.”  There are a couple of reasons I do that.  It’s not uncommon for us to have random students just see Mass going on in the Student Center in the Cafeteria and wander in to see what’s going on… or sometimes different religion or sociology professors will assign non-Catholics to attend a service to experience something they’ve never done in their lives and write about it… or one of our students invites their friends and roommates to come with them (which makes me most happy, as that’s Evangelization 101… would that every one of us did that on a regular basis)

The other reason I make the announcement is meant to be a reminder that going to Mass on Sunday is an obligation.  Receiving the Eucharist is a precious gift, something that is extremely serious and that we need to take seriously.  And we work really hard with our students to very gently catechize them on that point.   Some didn’t know for example that they’re supposed to “fast” for an hour before going to Mass.  Some didn’t know that missing Sunday Mass was a Mortal Sin and that they need to go to confession before they receive communion.  Some didn’t even know what a mortal sin was and hadn’t been to confession since their first confession.

So this particular “online congregant” watching our Sunday Mass livestream who asked me about this said that they were surprised to see how many kids coming forward to receive a blessing.  And noted that she had never really seen that at her local parish.  I agreed with her.

But it also crippled the Church from speaking our truths about our faith in clarity and charity.  Where we were perhaps over-compensating and grateful people were simply coming to Mass rather than talking about the seriousness of what it is we do in this Sacred place.  The call to holiness that every one of us is responsible to respond to.   This is why when Archbishop Cordileone, the Archbishop of San Francisco issued a statement on Friday about House Speaker Nancy Pelosi being barred from receiving the Eucharist it became international news.  In these very politically divisive times for some sadly, this simply became another story on the rundown of talking points that was either a cause for celebration (one saying this was another “great day” for “our side.”) to others saying all kinds of vile things about the Church and it’s leaders – or pointing to other Catholic clerics or personalities to hear what they wanted to hear (this was wrong, if Nancy Pelosi came to me I’d give her communion, etc.) 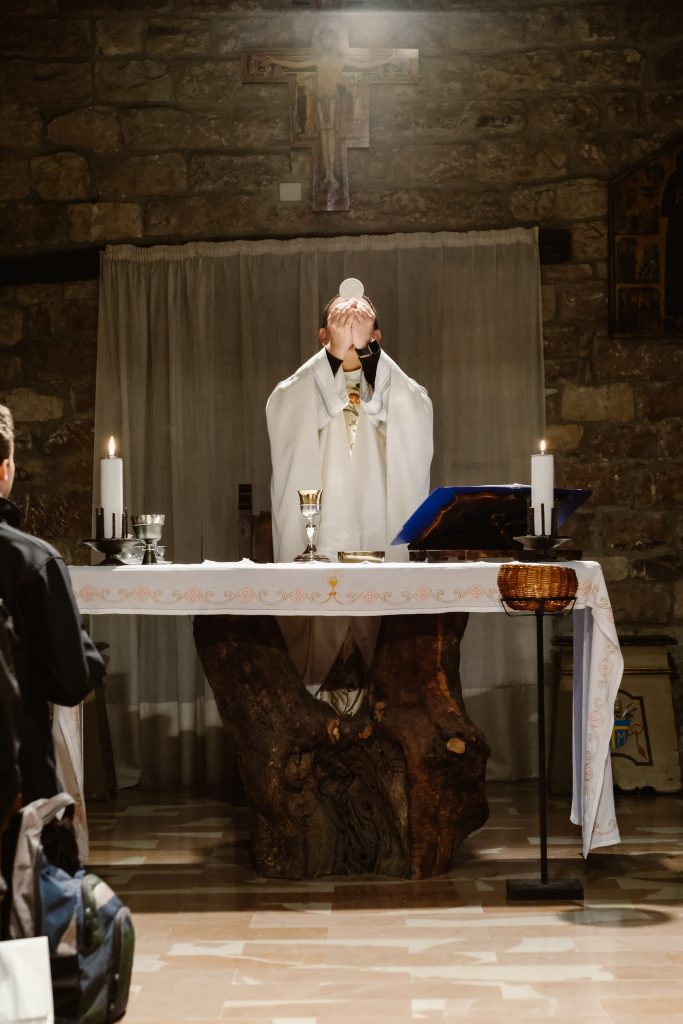 For the Archbishop to have come to this point to make such a public declaration is probably the last thing he wanted to do.  He had written a public letter talking about the importance of life, and the grave evil that abortion is, which has been consistent in Church teaching for thousands of years.  He had tried to reach out privately to the politician to privately speak to her about her very public stands where she has vowed to expand laws allowing abortion up till the day of birth and even in some instances after birth, which is more accurately called infanticide.  He especially was concerned where she would propose these things and then invoke her Catholic faith and distort Church teaching to justify these positions.

All of this is awful.  But these are strange and serious times.  And even though this is the last thing I wanted to talk about or bring up in a homily, (believe me, I had another one written and ready to go in case I chickened out)  People have been misled and manipulated for so long.  And I know just mentioning the word abortion is triggering for people.  I know people personally who’ve suffered from abortion – I have students, and friends – who I love and care for deeply.  I know I don’t know the totality of their stories and situations and circumstances.  But I know they are suffering and in pain, some are lost and trying to find healing.  And the last thing I want anyone who’s suffered from that to think that they are unwelcome here or judged in any way.  God sees the heart and wants to bring His love and healing to this world, especially those who feel most lost and alone and afraid.  I believe that with every fiber of my being.  And I have friends who spend a lot of their lives of ministry helping women and men who’ve been hurt by abortion to find how Jesus can bring forgiveness and healing even into these spaces they think are unforgivable.  Unforgivable is a lie the devil has been masterful at convincing many people to believe.  Jesus’ love and Mercy are abundant and generous and available.

But just as deeply, I recognize how important it is for us to reflect on what we do here… what receiving the Eucharist means… what Jesus means when he says in tonight’s Gospel: whoever loves me will keep my word, and my Father will love him, and we will come to him and make our dwelling with him.”  Love isn’t just a warm, fuzzy feeling.  Love isn’t just doing nice things.  Love to Jesus is defined as His laying down His life for us on the Cross.  It calls us to selflessness and sacrifice.  His call to Love invokes the importance of obedience to His word – to His commandments – which is often in conflict with the world, which is demanding and difficult.

This is why this recent news isn’t something that anyone should be celebrating or ridiculing.  But rather a call for deeper prayer and reflection for all of us.  Do we actually believe that the host we receive in Jesus’ Body, Blood, Soul, and Divinity?  Do we recognize the sacredness of this gift?  Do we see His love and humility that He comes to us in such accessible ways because He means what He says in today’s Gospel that he wants to come to us and make a dwelling with us?  If we do, do we recognize the need on our part to prepare to receive Him?  To learn why He teaches what He teaches through our Church?  To humble ourselves and repent for our sins, go to confession?

These are difficult, strange, and serious times.  It’s why even in the midst of this season of Easter joy, the Lenten practices of “Prayer, Fasting, and Almsgiving” are not meant to be simply “lenten” things, but all the time things.  May each of us commit to those practices – for ourselves, for one another, for politicians and Church leaders who are entrusted with so much responsibility and are held to greater standards with those positions of service.