I first received the book Chicken Soup for the Soul – back in 1995 as a gift when I was graduating college and preparing to enter the seminary.  The book of inspirational short stories that carry the promise on the cover to “open the heart and rekindle the spirit” was compiled by these two motivational speakers, who had heard them from audience members or from other sources over the years and typed, edited, organized them.  These heart warming stories compiled into this single title, which major publishers had rejected, much to their chagrin, as it was self-published, became this monstrous best-seller and now 30 years later has become it’s own entertainment conglomerate publishing over 250 more “Chicken Soup” titles, expanded into everything from television/film production to even pet food (I kid you not)

Thanks so much for stopping by to read my homily for FIFTH SUNDAY OF EASTER -May 15, 2022, for sharing it on your social media posts and your feedback and comments…  I’m also grateful for all those who’ve asked for the audio version and share them as well at SOUNDCLOUD click HERE or from ITUNES as a podcast HERE.  May the Lord be glorified in your reading and sharing Sincerely in Christ – Father Jim

One of the stories included in that initial volume that I had never forgotten was listed “On Courage.”  The story went:  Many years ago, when I worked as a volunteer at Stanford Hospital, I got to know a little girl named Liza who was suffering from a rare and serious disease. Her only chance of recovery appeared to be a blood transfusion from her five-year-old brother, who had miraculously survived the same disease and had developed the antibodies needed to combat the illness. The doctor explained the situation to her little brother, and asked the boy if he would be willing to give his blood to his sister. I saw him hesitate for only a moment before taking a deep breath and saying, “Yes, I’ll do it if it will save Liza.” As the transfusion progressed, he lay in bed next to his sister and smiled, as we all did, seeing the color returning to her cheeks. Then his face grew pale and his smile faded. He looked up at the doctor and asked with a trembling voice, “Will I start to die right away?”  Being young, the boy had misunderstood the doctor; he thought he was going to have to give her all his blood.

I remember reading that tear-jerker story that simply ended like that thinking “that would make a great sermon starter one day.”  But honestly, so did many others, because I’ve heard it used by priests, preachers and motivational speakers in a variety of contexts over the years a few times, that I’ve resisted using it.  When I was praying with these scriptures this past week that story came to mind, and forgetting where I had put this book, I did what would’ve been unthinkable 30 years ago (because it wasn’t a thing yet!)  And I started typing into Google “boy donating” and it not only finished the thought for me without my typing it“…blood to sister” (which was creepy, but efficient) but instantly gave a list of results containing the story.  One site was “Snopes” which is a popular website that claims to be a fact checker on pop culture and stories that pop up on the internet.  Clicking it, they went through a history of variations of this story that they had been able to track down going back as far as a 1925 film.

Which made this even more interesting to me than even the initial story.  Their editorial assessment labeled the story as a “legend.”  And they explained it by saying:   This “touching yet true life” (in quotations, to clarify their doubts about the veracity of the story) has been kicking around in popular culture for more than 90 years, which means it has already enjoyed a longer life than most of the people who repeat it will. No chicken soup keeps that well, and the astute should by now be ruling out the likelihood of so many critical-condition youngsters brought back from the brink of death by transfusion from siblings who were convinced they were submitting to having all their blood drained off.  Whatever the online story’s source, it is typical of many glurgerific offerings: (another pause here, again I had to google that because I never heard the word glurgerific before, which is defined as “over the top, implausible, cloyingly sentimental)     the sticky-sweet surface message masks a darker reading of the same tale. What should we make of the idea that a little boy believed his parents loved his sister far more than they loved him, and would happily throw away his life for hers?

I read that and was just stunned because, whether the initial story was true or not, many had found it moving and a tear-jerker because they recognized the little boy had an innocence, purity of heart, a selflessness and sacrificial nature that made him recognize true love.  But that’s the problem right there.  The word “love” has been trivialized and manipulated so much that we have people using it to describe ordering off of McDonalds Value Menu as that company’s slogan “I’m loving it.”  When people are using the word “love” as the feeling they have for a quarter pounder with cheese, we might have to recognize that people have very different understandings of that word. 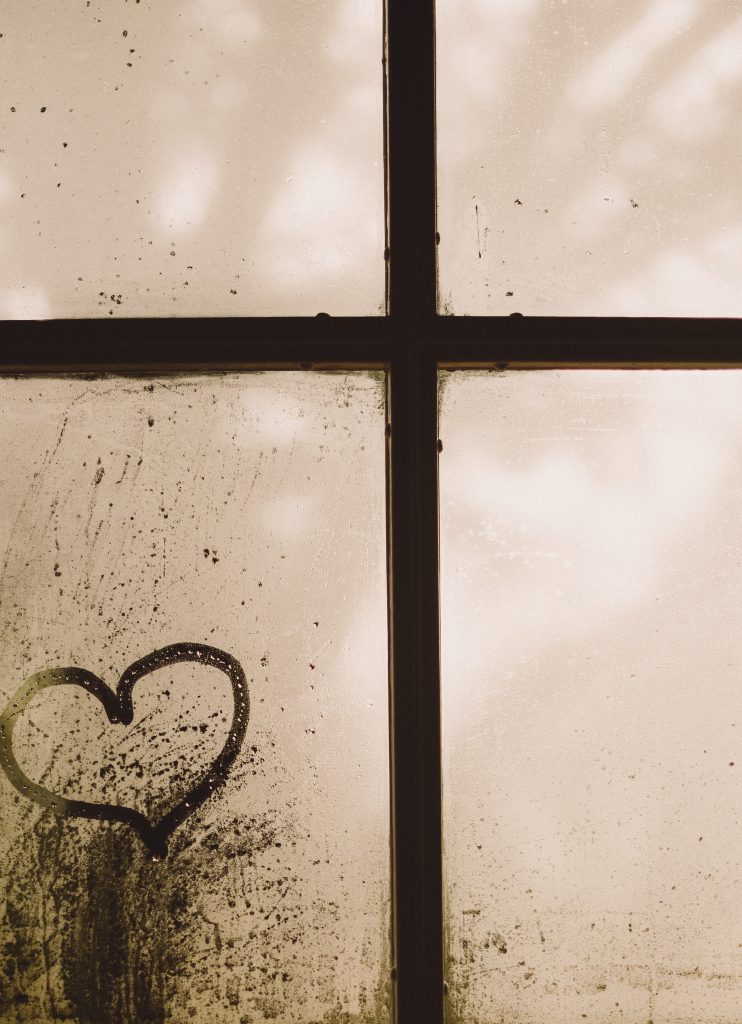 For us as Catholic Christians, love isn’t just a noun or verb expressing deep feelings of affection – but is a person: Jesus Christ, who is God incarnate.  In today’s Gospel, Jesus identifies Himself not only as God, and that at His core and nature – “God is Love” (as St. John simply but profoundly tells us in his first letter).  He calls us to “love one another” as a new commandment.  What makes it “a new commandment”- what makes it so dramatically different, explicit and raising expectations?   Because it wouldn’t be controversial for people to believe love as an expression of kindness,  looking at Jesus’ miracles: healing the sick, feeding the hungry, caring for the poor – and trying to emulate those to the best of our abilities as we imagining love to doing nice things.  But that’s not accurate.  When Jesus is calling us to love one another as I have loved you – He is saying this in the upper room on Holy Thursday night after the Last Supper.   Judas has just left to betray him and Jesus knows that his Passion leading to His death on the Cross are about to begin.   He’s embracing that Passion and that Cross for you, for me, for all humanity.  It’s His selflessness and sacrifice on the Cross that becomes the definition of Love to Jesus and what He is calling us to embrace as His disciples.

That’s why the crucifix remains front and center for us, even in the midst of this season of Easter Joy where we celebrate Jesus rising from the dead.  The crucifix is there because we are never meant to forget that true love costs something…   It is tied to sacrifices… often means there’s an element of suffering involved.

Our ancestors in the faith understood that perfectly.  In the first reading today, we hear of Paul and Barnabas preaching about this.  St. Luke wrote how they “exhorted them to persevere in the faith saying ‘it is necessary for us to undergo many hardships to enter the kingdom of God.’”   What the lectionary omits is that right before this, Paul had been stoned.  And not in the way that NJ stupidly recently legalized.  Paul and Barnabas had been preaching about Jesus, and winning converts, when people who wanted to stifle the Early Christians and stop the evangelization of the world and try to erase or cancel Jesus- came upon Paul, dragged him out of the city, and leveled rocks at him.  That was what was meant to be “stoned” – which was a particularly brutal, gruesome, and torturous way of death.  Thinking they had killed Paul, they left him for dead.

That he “rises” was of particular shock – miraculous to Barnabas and the disciples with them.  But when Paul goes back preaching, broken, beaten up, probably bandaged with a bloodied swollen lip and proclaims “the good news” – when people see Paul isn’t giving into fear, or anger, or bitterness, but speaks of something greater that he himself has experienced – namely forgiveness of his sin when he used to be of the same mind and heart, one who had rejected Jesus and wanted to eliminate Him the same way, stoning people who had done the same thing – that catches their attention.   When they hear Paul speak that human suffering is meaningful when we unite it to Jesus’ – that when we desire to live like Him, for Him, with Him – when we don’t live for a happy comfortable existence here but have our hearts focused on an eternity in the kingdom of heaven – that is when we demonstrate how we understand the value of sacrifice because we understand the reality of love.

That’s how we can see the truth of this “legend” of a little boy donating blood for his sister that, no, he didn’t think his parents loved him less than his sister, but that he was being Christ-like and thought he was laying down his life for hers.  Whether that particular story was verifiable or not, it rings as true and beautiful because it is a story that Christians throughout the centuries have demonstrated in countless ways.  Whether it is one of the greatest of martyrs laying down their lives for Christ physically in heroic ways that inspire, confound and challenge us… to some of the most seemingly unknown of individuals who do that in equally meaningful ways spiritually as they put the care, the needs, the will of others ahead of their own – whether it’s a spouse doing it for their husband or wife, a Mother or Father doing that for their children, or a priest and religious doing that for the people the Lord has called them to serve.    In all of those ways, we strive to live Jesus’ commandment, knowing that love, true and sincere love, is the only thing that matters.