It’s rare that one specific event would have spiritual, political, and historic implications – but then again, St. Pope John Paul II was indeed a rare, immensely Christ-centered, charismatic, and brilliant leader.  The year was 1979 (for my beloved students, your parents were far from being your parents as they’re close to my age and I was 6 years old at the time).  Poland was still under the iron grip of the communists who had taken over their independent country and attached it to the “Soviet Bloc.” John Paul II, a proud native son of Poland had been elected the first non-Italian pope in centuries.

Thanks so much for stopping by to read my homily for the THIRD SUNDAY IN ORDINARY TIME -January 23, 2022, for sharing it on your social media posts and your feedback and comments…  I’m also grateful for all those who’ve asked for the audio version and share them as well at SOUNDCLOUD click HERE or from ITUNES as a podcast HERE.  May the Lord be glorified in your reading and sharing Sincerely in Christ – Father Jim

The official position of the Socialists, communists was that religion was “the opium of the masses” – faith was irrelevant and unnecessary.  All you needed was the state, the government to take care of your needs, and your obligation as a citizen was to support those efforts.  That had been the propaganda that was forced upon the occupied and oppressed people from the 1940s

When John Paul not long after being elected wanted to visit his homeland and to celebrate Mass, the authorities faced a real conundrum.  They didn’t want it to happen – but if they forbid it, would that possibly rally the people or even worse, concede that faith –  something they considered false and ridiculous – actually had an impact in the real world?  So they gave permission – but the propaganda campaign was going to do everything it could to diminish it, downplay it.  Teachers were told to explain to children that Pope John Paul II was an enemy… dangerous – that he was a showman who tried to win people over with charm and humor.  The Polish media was given strict instructions to censor and limit the pope’s comments and appearances.

On June 2, 1979, the Pope arrived in Poland. The government was concerned that a large crowd would greet him or attend the outdoor Mass in the city of Warsaw.  Despite their best efforts, their worst fears were realized when not hundreds, not thousands, not tens of thousands but well over a million people crowded the streets, highways, and massive city square.

The Pope asked the crowds in his first address in his homeland, why was a Polish man elected Pope?  Noting the long history of suffering the Polish people had endured and were continuing to experience, not the least of which was the last 30 years of this atheistic regime trying to rewire their hearts and minds to let go of their faith.  So when John Paul explained that he believed he was elected Pope as a representative of the people to testify to the Cross and Resurrection of Jesus, and then asked if the people accepted their role and responsibilities as well, there wasn’t polite applause or shouts of support.  The crowd spontaneously thundered back in response “WE WANT GOD… WE WANT GOD.”  John Paul continued – What was the greatest of the works of God? Man. Who redeemed man? Christ. Therefore, he declared, “Christ cannot be kept out of the history of man in any part of the globe, at any longitude or latitude. . . . The exclusion of Christ from the history of man is an act against man! Without Christ, it is impossible to understand our history.”  And once again, the Crowd responded WE WANT GOD.

As the week-long visit continued, and the media continued to ignore the visit, the authorities hoping that these crazy Catholics got it out of their systems and would be bored and move on by now they were shocked when the final outdoor Mass eclipsed all that had taken place up till that point.  Over 3 million people, many coming hours, days early to make sure they got their space for the Mass.

There, Pope John Paul II said:  Is it possible to dismiss Christ and everything which he brought into the annals of the human being? Of course, it is possible. The human being is free. The human being can say to God, “No.” The human being can say to Christ, “No.” But the critical question is: Should he? And in the name of what “should” he? With what argument, what reasoning, what value held by the will or the heart does one bring oneself, one’s loved ones, one’s countrymen and nation to reject, to say “no” to Him with whom we have all lived ..? He who formed the basis of our identity and has Himself remained its basis ever since. . . .

The people heard Pope John Paul II remind them of their true identity, reclaiming them and their country for Jesus Christ.  JPII’s biographer, George Wiegel put it this way:  “Poland was not a communist country; Poland was a Catholic nation saddled with a communist state.”  And the lie was exposed for all to see.  When those 3 million-plus people went home that night and tuned into state-run TV to see pictures of the immense crowd, coverage of this amazing event, where the spirit of God could be heard speaking through one of their own native sons who was now Pope – but saw mere seconds of heavily doctored coverage that did not acknowledge the truth, it was the beginning of the end.  One historian wrote of it:  The people who had been at the mass could compare the reality they had witnessed with their own eyes with the propaganda their media reported. They could see the discrepancy. This left the people of Poland able to say at once and together, definitively, with no room for argument: It’s all lies. Everything this government says is a lie. Everything it is is a lie.

The Lord working through this Pope’s one visit undid over 30 years of lies.  The end of this evil, atheistic regime began to crumble with the Pope helping to remind the people of their true identity, which unloosened their tongues and voices to the cry of the human heart: WE WANT GOD. 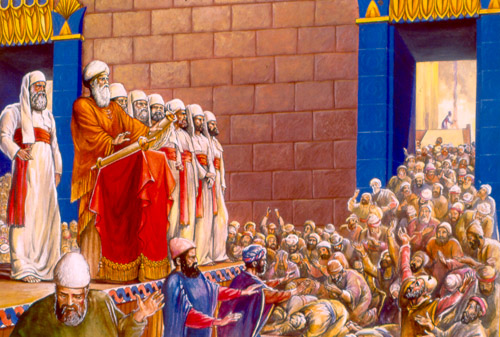 That story came to mind because it’s amazing to think how often history repeats itself.  In the first reading today, we hear from Nehemiah – it’s the only time in our three-year cycle of Sunday Mass readings that we ever hear from this Old Testament book of scripture.  We hear this high priest named Ezra speaking in the 5th Century BC in an open-air setting, similar to the Pope’s Mass almost 2,500 years later.  Ezra’s fellow Jews (also similar to the Poles) had a long history of suffering – well over millennia in fact.  Ezra’s people had lost their Land to hostile, evil regimes – but for an important reason:  because they had disobeyed God, they had ignored his commands, they had forgotten all the promises of the covenant.  As Ezra gets up to basically read the scriptures to the people, we hear that the people are moved to tears.  It’s like scales falling from their eyes – they hadn’t realized how much they had sinned, how far they had moved away, how much they had abandoned the Lord.   They suddenly realized it was their own disobedience that had been the root of all their problems.  The truth was as clear as day how bleak their lives had become as they allowed God to be eclipsed from it.  And that caused them to weep.  They too WANTED GOD but feared at this point, it’s too late, they’d lost Him.  To that, Ezra responds “Today is holy to the Lord your God.  Do not be sad and do not weep!   Rejoicing in the Lord must be your strength!!!”  Those words were essential in renewing their Hope.

The reality was, so impactful as this day was that it made it into scripture… As much as they did rejoice and expressed they WANTED GOD -that distance between their behavior and what God had commanded, the prophecies warning them of the desolation for abandoning God resulting in the sad state of affairs, wasn’t something they could fix.    All they could do was repent of their sins.  All they could do was turn back to Him and wait on the Lord.  Wait for His promise to save and redeem them to be fulfilled.  Which they would, for another 400 years.

Which is what brings us to the Gospel.  After hearing the beauty of the Christmas story, God becomes man being born with Jesus’ birth; the revelations of who He was with a star appearing to the Wise Men from the East leading them to Jesus at the Epiphany; with God, the Father’s voice being heard as Jesus is baptized by John the Baptist saying “This is my beloved son, listen to Him” and then Jesus performing his first sign, his first miracle at the Wedding of Cana where he turns water into 180 gallons of top-shelf wine.  That is followed with this, His first sermon.  After proclaiming the words of the prophet Isaiah, Jesus as the Rabbis of his day would have done, sits down taking what was considered “the seat of Moses” and preaches.  How long it went, the details and particulars of this sermon are summed up in one sentence: Today, this scripture passage is fulfilled in your hearing.  To all those held captive, to all those blinded, oppressed… To all those longings for liberty, healing, freedom… to all those desperately seeking, waiting, to the longings of every human heart crying WE WANT GOD, Jesus announces to them, I AM – I AM HE – I AM HERE – I AM NEVER LEAVING YOU.

It strikes me that almost 2 years into this viral pandemic, with all the sickness, the fear, and uncertainty that have defined these years and for way too long we’ve suffered as a Church through awful scandals of stories of evil, depravity, abuse…  for us here in the United States who have found ourselves fiercely divided and polarized to the point that even our very language, the words we use are sources of division… All of these things have left us in a weird place.  Where depression has been normalized that people think everything is just awful and the best we can do is just try to keep our heads above water, just survive… Where evil has been normalized and accepted with greater and greater regularity – people seem weighed down.  Not just those who never darken the doors of a Church, but even more distressing, for us inside.  I see it.  I hear it.  I feel it myself.

This is why these scriptures hit me so strongly.  God has not abandoned us or forgotten us.  Jesus lived, died, and rose from the dead to conquer our greatest of fears – death itself and prove in word and deed that love is far stronger than death.  And poured out the Holy Spirit, so that we could see His presence and action continuing in our world – so that we could be His very presence, and perform the very acts He did – teaching, healing, expelling demons.  But that’s only going to happen when like our ancestors in the faith listening to the priest Ezra, our fellow Catholics listening to Pope St. John Paul II –

we reject the lies of the evil one that continue to sow seeds of fear.  When we reject those voices and propaganda that continue to cause people to doubt.  When we hear the Lord’s promises anew and recognize Jesus’ presence among us reminding us the freedom, the healing, the liberty we desire, is very much within our reach, and can be ours when we find that voice within and cry out ourselves – WE WANT GOD.