At an orientation session for New Students starting their college careers, one of the presenters was able to kind of snap every individual in that vast auditorium of several hundred freshmen from their starting to doze off after a string of people talking for a good hour or so with one sentence.  They asked: Did you know that it takes only about 7 seconds to make a first impression?  It was comical seeing some people instantly sit up straight at attention while others started quickly taking side glances at people all around them.  The speaker went on to explain that psychologists have researched and come to that conclusion:  that in that short a period of time, people somewhat instinctively make judgments about another person’s trustworthiness, physical strength, intentions, even their intelligence.  Whether that is an accurate impression or not is a whole different issue.  In fact, these same experts will claim that people can get so attached to their first impressions of others that it can be very difficult for that to be changed, even when presented with a lot of evidence that might point to the contrary.

Thanks so much for stopping by to read my homily for the SECOND SUNDAY IN ORDINARY TIME -January 16, 2022, for sharing it on your social media posts and your feedback and comments…  I’m also grateful for all those who’ve asked for the audio version and share them as well at SOUNDCLOUD click HERE or from ITUNES as a podcast HERE.  May the Lord be glorified in your reading and sharing Sincerely in Christ – Father Jim

I’m not a psychologist so I don’t know how accurate a theory that is, but it got me reminiscing.  Remembering different people in my life, some of those first meetings and how those judgments kind of left a character description in my mind. When I think about some of my closest of friends, I can remember those first encounters, conversations and what was it that made such a strong sense of connection… My favorite and most impactful of teachers and professors, I can remember those first classes, lectures and what made them stand out as so impactful … (same is true for some of my least-favorites)

First impressions came to mind praying with this Gospel this past week.  As Catholics, we have just closed out the Christmas Season the last two Sundays.  First with the Epiphany, recalling how the wise-men went searching for the newborn king of the Jews through the direction of this heavenly sign, this star, which directed them to meet the child Jesus.  Last week with Jesus’ baptism in the Jordan by John the Baptist, where God the Father’s voice calls out from the Heavens saying that Jesus is “my beloved Son …[who He is] well pleased with.”  Those are some pretty impressive “first impressions” of Jesus without Him saying or doing a lot.  That all changes this week, where intentionally we hear Jesus’ first miracle, or as St. John the Gospel writer puts it, Jesus’ first sign.

Before any of Jesus teachings, or any of His sermons… And from the over 40 different miracles that are recounted throughout all the scriptures that included healing the sick, raising the dead, even having the ability to control nature commanding winds and seas and storms to be at peace, today we hear how Jesus first reveals Himself, the first impression He wants to make on this large group of people including family, friends, his first disciples and complete strangers:   Jesus changes water into wine. 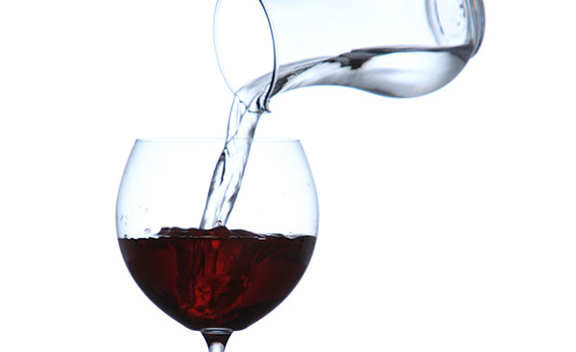 Honestly there are books written on this one particular episode.  St. John’s Gospel was the last written and he is the most reflective and thoughtful of the writers, so all the details are heavy with meaning and significance… even the fact that St John doesn’t use Mary’s name but calls her the “mother of Jesus.”  It’s not like John didn’t know her name, he was taking care of her by that point, but its John’s way of making sure the focus is never off of Jesus.  Or with Jesus calling Mary “woman” which sounds like a rebuke, but is actually meant to draw a connection back to the Old Testament book of Genesis where the first “woman” (Eve) prompts the first man, Adam into sin. John is making the point that  Mary is “the New Eve” who prompts the “New Adam” Jesus to begin to save us from sin.  Maybe that’s the nerdy priest who loves to get lost in all of those details.  But the point is, there’s so many layers and meanings to everything going on here.

But to try to stay focused:   Jesus’ first miracle is more than His saving this wedding party by turning water into over 180 gallons or over 900 of our modern day bottles of top-shelf wine.  A feat that more than provided for this week long celebration that would’ve included most of that entire village.  For many of my college students, it leaves the impression He is the greatest of party guests ever.  But all kidding aside, why was this the first sign, what is Jesus trying to impress upon those guests and those of us not at that party?

I think we have to just look at the difference between water and wine.  As human beings, we don’t need wine.  We need water.  Water is essential for our survival, we wouldn’t be able to live for more than 3 days without water.   Wine is a very different beverage.  For those other than Jesus, to make wine, involves elements of nature -wine, yeast coming together and then considerable time and patience for the fermentation process to take place and result in this vintage being created.  So we can appreciate that just on a surface level, while water is essential, for the most part it’s readily available and accessible – wine is not.  While the crowds are celebrating and enjoying this turn of events of Jesus turning water into wine, whether they were able to be very reflective in that moment on the deeper meanings, it was certainly memorable, it made an incredible first impression.

One of which is that  Jesus doesn’t want us to simply “survive” but that He wants us to “thrive.”  Or as He will put it (later in John’s Gospel) “I came that they may have life and have it abundantly.”  Jesus has come so that we have the fullness of an abundant life.

For too many of us, we can forget that.  Even those of us who do make it into these doors each week.  We are living in a world that is maniacally fixated on amplifying fear making us believe that our very survival is constantly at risk.  A world that has lost any sense of the supernatural and grown into disbelief that there is any thing other than this earthly life.  And that even has affected us as people of faith into lukewarmness where we kind of lower our expectations that God hears our cries, is attentive to our needs, can or will do anything for them.

One of my oldest of friends whom I’ve known since we were in Kindergarten had reached out to me last week to tell me that his brother in law had COVID and has several comorbidities and that “he’s dying… doesn’t have much longer from what the doctors say.” What was striking to me was as he was asking for prayers, there wasn’t anything specific.  It was simply stating those facts coupled with “would appreciate your prayers.”  I said in response “I’m praying that the doctors are proven wrong.  I’m praying that he fully recovers.  I’m praying that you and your family experience healing.  I’m asking your Dad (who passed away a few months ago of natural causes in his 90’s) to pray for you and for all these things – and you and your family should do that to.”  And it was interesting because it’s like he didn’t want to go that far.  He was very grateful for the prayers and I know he’s praying, but he’s keeping it kind of very low expectations – “if it’s meant to be – he will get through this. If no, God has his reasons.”

I love my friend, and I know he and his family are going through a difficult time, so the last thing I would want to do to him or anyone is make them to feel badly or unnecessarily guilty.  But it was striking to hear what were basically prayers without much expectation attached to them, almost not wanting to get their hopes up, believing that this doctors report was the final word.  Thanks be to God, a week later, this man’s still alive, still fighting.  The prognosis isn’t clear, but it’s showing that the one from a week ago wasn’t as clear or as definitive as they originally thought either.

While I don’t know what will happen to this man and his family, I do know that Jesus wants us to go to Him, He does want us to see in Him the reason to get our hopes up – that He wants us not to simply survive, but thrive, that He wants us to live an abundant life. That in Him, we find the way, the truth, the life for that fullness and abundant life, for now and for all eternity.

Yes, that means that ultimately there is a time and day when we will leave this earth.  But that’s not something He wants us to live in dread and fear over, but rather that He wants us to joyfully anticipate.  One of the ways we joyfully anticipate that is, when we do put out our big, bold prayers, when we see the miracles that do take place.  When we grow in confidence that He sees us, knows us, loves us and has what’s best in store for each and everyone of us.  That was the first impression Jesus gave at Cana.  May that be the lasting impression we hold fast to.