One of (the many) challenges that social media presents is it’s so easy to get drawn into debates that ultimately are pointless, counter-productive, and often result in people being far less “social” with one another in any sense of the word.  That’s a challenge I recognize for myself as a 48 year old priest of 22 years – (and which I really worry about for those who are far younger – whether it’s people of college age that I work with, my nieces and cousins who are even younger, on how to deal with all of this)  Because personally it’s taken some time for me to get better with dealing with social media.  Whether it’s through different filters and such to avoid individuals who seem to simply want to start arguments; being a bit more selective before posting something myself or reflective before responding to someone else.  That was all put to the test the other day.  Someone I’ve known since I was in high school, who facebook would characterize as a “friend,” but in fairness I haven’t seen them or interacted with them, well since high school posted something that ended up on my feed and caught my attention, for good reason.  They wrote: “Where do I turn in my Catholic membership?”  Obviously that was provocative enough for me to stop scrolling and look at what was going on here.

Thanks so much for stopping by to read this, MERRY CHRISTMAS!  As we conclude the Christmas Season, here’s my homily for the FEAST OF THE BAPTISM OF THE LORD -January 9, 2022, for sharing it on your social media posts and your feedback and comments…  I’m also grateful for all those who’ve asked for the audio version and share them as well at SOUNDCLOUD click HERE or from ITUNES as a podcast HERE.  May the Lord be glorified in your reading and sharing Sincerely in Christ – Father Jim

Attached was an article from CBS news that took a few sentences from a recent homily from Pope Francis where he was encouraging couples to be open to life and to have children and pointed out that too many people use pets as substitutes for children.  While I can appreciate that the topic of family life, and having children can be challenging and difficult for many couples; that people are very protective and sensitive about their pets (I don’t have a dog, although I’ve come very very close to adopting a few times and shed more than a few tears when one of my brother’s dog died a few years ago) just seeing this post, and the complete agreement of every one of the comments that grew angrier and more vulgar was what was somewhat shocking.

This isn’t about the Pope’s homily.  It’s not about whether someone agrees with the Pope on every topic, how he expresses himself or even personally likes him or not.  As Catholics we’re called to have an openness of mind and heart when the Pope says something and offer our respect to him as the Holy Father.  But that doesn’t mean we have to blindly fall in line or even agree with everything he says and does when he’s speaking in matters not related to faith or morals.  In this particular example, I would hope that people would hear the importance of what the Pope was saying in terms of the need for us to recapture a better understanding of family life, the importance of children, the hardness of heart in our world that has accepted ignoring children who are in need – whether struggling in poverty, awaiting foster parents or adoptive parents – to the atrocity of the legalized destruction of human life in abortion, while at the same time seeing the excesses that some go to in taking care of pets.  There’s a whole host of issues and topics that need to be thought about, prayed about, discussed in a much deeper and reflective way that I doubt could ever take place on a facebook thread.  So not to minimize any of those things – but my concern wasn’t about that particular homily or all of those important topics.

The thing that I couldn’t shake was someone saying “where do I turn in my Catholic membership?”  The casualness of making such a public declaration.  Granted, social media posts don’t provide any nuance to well anything.  And had it just been people debating about that one homily (or how it was being characterized and reported by one news source) I probably would have forgotten about it just as quickly as a whole list of “Catholic debates” that I see online (or that people try to suck me into).  Life is way too short, and faith is too important to allow the devil to continue to divide and distract us from one another and most importantly from Jesus Christ.   Which is why that post bothered me so much and has me concerned for this person from my past and all those agreeing with them, because it seems they have allowed that to happen.

What does our “Catholic Membership” really mean?  That’s something we’re called to focus on with today’s feast and these scriptures.

Today we celebrate what many consider the official end of the Christmas Season.   Since December 25th, Catholics have been celebrating the word becoming flesh, our eternal God entering into His creation as one of us.  Humbling Himself to being born into a very human, humble family so that eventually we could be welcomed back into the family He created for Himself. 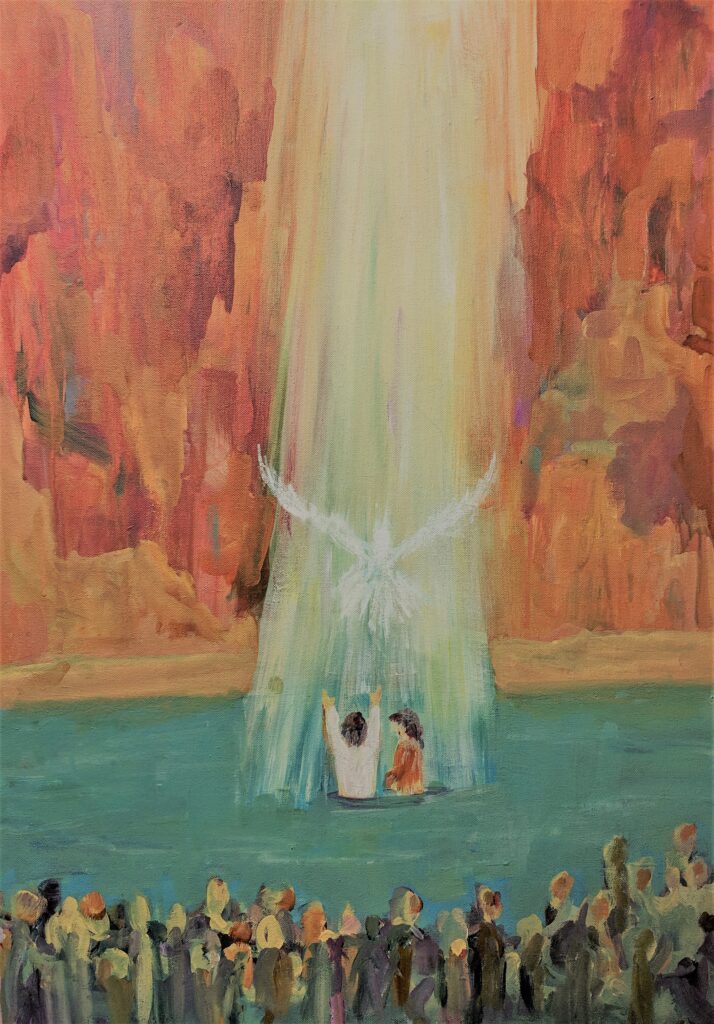 This Gospel and this feast of the Baptism of the Lord can be a somewhat confusing one for many people.  We have to remember that the baptism being described here wasn’t the Sacrament we received when we entered into the Church.  It was John the Baptist’s baptism of repentance. It was John’s way of preparing the people to meet God, to recognize how He had come among them and was hidden right there in the midst of them.

The people knew all too well that their world, their nation, their families, their very lives were far from perfect.  All was not right with the world or within themselves.  Things were a mess.  So much so, that for many, it was hard to imagine God still cared for them – noticed them – let alone would come, and was among them.  So John the Baptist is there calling them out on all that wasn’t right in the world – not to make them feel bad or to assign blame.  Rather to remind them that the only thing that each person ultimately has responsibility for, the primary place that we can affect change is within ourselves:  by repenting of our sins and living differently.

It’s true, there were many who rejected John.  Especially those who liked the status quo, had gotten comfortable with the dysfunction and brokenness of the world and found a way to make it work for them.  Yeah they tried to ignore John and would eventually behead him for these proclamations.  But for many others who heard these prophetic words of John, the Gospel describes it beautifully: they were filled with expectation.   People were anticipating something that would fulfill their deepest hopes and dreams.  These people were awaiting God’s promises first uttered by the Prophet Isaiah (that we heard in that first reading) to be realized.  The valley’s being filled in, the mountains and hills being made low… Or in other words, speaking to the desire in the human heart that longs for our valleys of disappointment, discouragement, of fear to be filled in.  For the mountains in our lives: of selfishness, of selfcenteredness, from our sins – which all obscure God from our lives to be leveled.

At this pivotal moment, as the people are responding to the preaching of John the Baptist who was calling them to this repentance, whose inviting them into the difficult but essential work of changing their lives, to be bold and courageous and step into these waters and come out committed to doing these things, an amazing and unexpected, and utterly awesome thing happens.  Jesus joins those crowds.  He walks with them.  He sees and hears their desire for God; their resolve to try to change their lives; their hope that God will fulfill these ancient promises.  And in all humility, in his love for humanity, he steps into waters he doesn’t need to step into… receives a baptism of repentance he doesn’t need … simply to show how He as Christ and Lord; how He as King of the Jews, how He as the God who saves – will save.  Not demanding servitude revealing himself as a God who is Master and we are mere servants.  Not spying on us waiting for us to screw up and cast us into Hell.  But rather Jesus comes and meets us in our brokenness, in our recognition of the mess of our lives, as a brother who loves us… who will do anything for us – will lay down his life for us.  Why?  Because of what St Paul told us in the Second reading “not because of any righteous deeds we had done, but because of his mercy.”

Yes, because of this extravagant, undeserved gift of amazing love – His Mercy.   And as he does this, God the Father can’t hold back anymore.  He can’t contain his excitement.  As Jesus is there with these people in these waters of repentance, the Father’s voice is heard crying out “You are my beloved Son with you I am well pleased!”

Beloved Sons and Daughters of our Heavenly Father in whom He is well pleased.  That’s what each and every one of us has become in our Baptisms.  That’s what’s at the heart of our “Catholic Membership” an identity which has eternal implications which shouldn’t be diminished, forgotten, or treated so carelessly.  Sadly for too many, we have it backwards.  We are filled with expectations too, but they are born of the things of this world – some good, many not so: that lead us to think that my feelings, my desires, my wants all need to be addressed according to my plans.  That put us on this bizarre, vicious cycle that never comes close to bringing me the joy that comes from hearing our Heavenly Father calling us His Beloved Son and Daughter in whom He is well pleased.

But here’s the amazing thing, even when we forget that, He doesn’t.  Jesus shows in this Gospel that He would not be scandalized by the sins that needed to be forgiven.   Jesus never looks at the crowds with disgust for the messes they had in their lives. The moment that someone is ready to humble themselves and acknowledge, I don’t have all the answers, I’m not perfect, I’ve made mistakes Jesus gets in line with them – whether it’s in the Gospel with John’s Baptism, or in our day and age, when people are waiting to make a confession – raising the dignity of what they were doing.  Telling them far from being failures, in their willingness to acknowledge their messes and desiring to turn away from them – the prospect that they too could become God’s beloved sons and daughters is right there, in their reach.