It’s been said that in our day and age, with people holding more polarizing beliefs and opinions on an ever-growing list of items, that it’s hard to get people to agree on anything.  But if there’s one unifying statement that I’ve found recently, it is that things are harder this Christmas than last Christmas.  I’ve heard family, friends, fellow priests, parishioners – even on the college campus where I serve, among believers and not – this one sentiment seems to have grown in acceptance.   Whether it’s that people are still getting sick – or feeling frustrated from just hearing about this cursed COVID and  the drumbeat of fear around it – or that people’s expectations were so high a year ago that by now things would be back to “normal” – any or all of those things, and a bunch of others in between – it’s been striking to see and hear people seeming even more stressed than they were a year ago.

Thanks so much for stopping by to read this, my homily for the NATIVITY OF THE LORD – CHRISTMAS -December 25, 2021, for sharing it on your social media posts and your feedback and comments…  I’m also grateful for all those who’ve asked for the audio version and share them as well at SOUNDCLOUD click HERE or from ITUNES as a podcast HERE.  May the Lord be glorified in your reading and sharing Sincerely in Christ – Father Jim
-PS:  We are in the midst of the Annual Red Hawk Catholic Christmas Appeal.  As of Christmas Eve, we are just over $18,000 towards our $25,000 goal- for more information if you’re interested in helping: https://www.facebook.com/donate/673334786984593/   or you can donate at www.RedHawkCatholic.com Thank You for your consideration!

That seemed to reach a fever pitch this past week where I heard personal stories of people calling off Christmas plans… combined with news reports of restaurants, theaters, even the Radio City Christmas Spectacular show closing – professional sports games being sidelined.  Lots of attention was paid to high profile figures, from Queen Elizabeth to Bill Gates, announcing they’ve cancelled their plans as well.  All of this has left several news sources to run with the headline in which they summarized and concluded: “Christmas is ruined.”

Seeing and hearing all these things and the wide-range of reactions to it all is disorienting, depressing and confusing for many people.   I have to confess it’s been a challenge for me, too – I’ve had friends getting news that they had to quarantine, gifts that I ordered weeks ago with “guaranteed” delivery proving not so perfect a guarantee, mistakenly picking up a box of what I thought was one of my “Kodiak whole-grain” things that I eat regularly to find it’s a baking mix – foolishly thinking I can do this (or have the time to do this) and then getting really in the Christmas spirit when I realized I forgot to add milk to them… Fa la la for sure…  I realize how these things pale in comparison to what other families are facing; and just my annoyance over these things helped me appreciate where some people are coming from when they say they feel “Christmas is ruined.”  It’s been a long year and, for many, their plans, their hopes and expectations have been ruined.

But Christmas itself isn’t ruined.  It can never be.  Which is why we are here and why this is the most important part of all that seems to always crowd this celebration of Christmas.

Of the four sets of readings that are possible for a Catholic Mass between Christmas Eve and today, these readings for “Mass during the day” really stood out.  You’d expect to hear one of the other Christmas Gospel stories – When Joseph has this angelic visitor explaining this historic birth of the Son of God born of the virgin by the power of the Holy Spirit that fulfills God’s most ancient of promises to Adam, David and Abraham…  Or the frantic preparations for the birth of the Baby Jesus that resulted in his arrival in a manger… or the recounting of the Glory of God appearing in the sky and angels announcing the news of the birth to shepherds to them going and announcing it themselves. Instead of any of those beautiful, well known parts of the Christmas story, it’s almost surprising to hear at this Mass, this most-likely least-familiar and least-expected account from the Gospel of John.

St. John’s Gospel  is the last Gospel written.  John knew all those stories by heart and, having cared for the Blessed Virgin Mary the last years of her earthly life before her Assumption into heaven, learned to treasure them in his heart, as she had.  He’s had time to reflect on all the Christmas stories.   But to give a little context about how things were going for St. John as he sets about to write this Gospel…  You want to talk about things being “ruined?”  The apostles had thought that after Jesus’ resurrection from the dead, Ascension into heaven, and being gifted with the Holy Spirit at Pentecost, that He was going to return and the end of the world would come pretty quickly – and the fullness of God’s Kingdom would be revealed and established.  Yet that was far from what happened.  The reality was, as John sets his hand to paper (or rather papyrus),  John is the last apostle alive by that point.  All the others – his biological brother St. James and his brothers in Christ, the inner circle of apostles, the first followers of Jesus – they have all been brutally killed, martyred  for being followers of Jesus Christ and proclaiming Him to the ends of the earth.  After the trauma of all that, and the Blessed Virgin Mary being assumed into heaven, as well, he is the last man from the original 12 still standing.  While he’s spared from execution, his punishment for preaching the Gospel is not without cruelty, being forced into exile.  John is alone and isolated.

How does John reconcile all that has not gone according to plans?  He finds himself the most reflective of the Gospel writers as he sets out to tell the story.  It’s like he’s trying to find the adequate words to express how his life was changed by his encounter with Jesus.   What made him abandon his trade and family business of fishing . . . what made him re-evaluate all that he ever thought was important, all that he had ever known.  He answers, poetically: 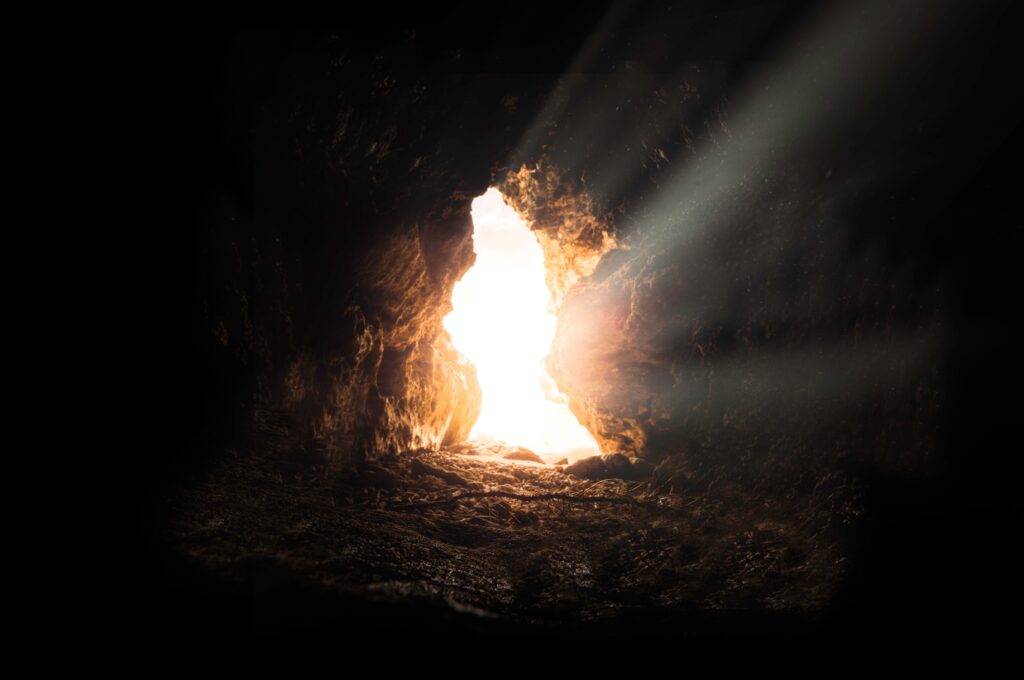 Yes, the years after Jesus’ ascension had been long.  Not many of their hopes and dreams came true.  Many of their plans had been ruined.  But John, and those earliest and first Christians, knew that if they could let go of all that, just as they had let go of all they knew and thought was important when they first met Jesus, they would have Him.  Which was all that they needed.  That light that shines in the darkness.

John recognized how that was true in his own life.  The brokenness that he experienced from a less than perfect world – with imperfect people, with broken politics, with unequal class structure, with division and tension and fighting and warring – from the very first day John encountered Christ, it was clear as when light is contrasted with darkness.  Which is what made it easy for him to walk away from it all and cling to Him.

And that was true of all Jesus’ first followers; “to those who did accept him he gave power to become children of God.”  They could contend with the brokenness of their world.  They could overcome it.  They could transform it because “the word became flesh and made his dwelling among us.”  There was a way out of all that was ruined.

The darkness, the things that threaten to ruin everyone and everything, still exists.  Even though Jesus is “this life [that is] the light of the human race” – people sadly fall for the temptations luring them to look at other things, other places, other people for that which brings them their identity… John points out that even “his own people did not accept him.”  But for those who did, those who still do, he gave power to become children of God.

Becoming children of God.  That is the gift of Christmas.  John wants us to focus not simply on Jesus’ birth, but how that has caused our re-birth – what some of our Protestant brothers and sisters would call being “born again” – being Baptized into Him.  He who still lives, still exists, still is among us here and now, especially here as we receive His word, and His Body and Blood in the Eucharist.  These sacred realities help us to experience how

and made his dwelling among us,

and we saw his glory,

the glory as of the Father’s only Son,

full of grace and truth.”

With that grace and truth, the darkness that still threatens and frightens so many of us, can be overcome. Christ’s birth is the beginning of His coming into our world in a physical way, the beginning of His story that would lead to the Cross but, also, to the glory and salvation of Easter Sunday.  God loved us so much that He sent us His only begotten Son, a Son who loves us.

Christ is born.  And that’s why this Christmas and every Christmas can never be ruined.