There is nothing subtle about today’s feast day – or more precisely, today’s “solemnity” which means one of the greatest of feasts…  This greatest of feasts is called the Solemnity of Our Lord Jesus Christ, King of the Universe.  We’re not saying just of the Church, or a nation, or a continent… We’re not talking simply about planet earth… We don’t even limit it to our Milky Way galaxy.  Without any hesitation, we say it’s all of those things and then some as we boldly call Our Lord Jesus Christ King of the Universe.  The whole shabang  -all that was – all that is – all that is to be.

Thanks so much for stopping by to read this, my homily for the SOLEMNITY OF OUR LORD JESUS CHRIST, KING OF THE UNIVERSE -November 21, 2021, for sharing it on your social media posts and your feedback and comments…  I’m also grateful for all those who’ve asked for the audio version and share them as well at SOUNDCLOUD click HERE or from ITUNES as a podcast HERE.  May the Lord be glorified in your reading and sharing Sincerely in Christ – Father Jim
-PS:  We are beginning the Annual Red Hawk Catholic Christmas Appeal a week early in anticipation of Giving Tuesday – for more information if you’re interested in helping: https://www.facebook.com/donate/673334786984593/   Thank You for your consideration!

Despite there being no ambiguity with the title, you could be forgiven if you had some confusion about that claim.  Maybe on a certain level of wonder and awe, because of the massiveness and mystery of the galaxies and the earth, we might relegate those things to being under Divine command and order.   But a closer look at what happens on each of our continents, a cursory awareness of the news streams at what happens in different nations of our world – and closer to home, here in our country, state, community, we can probably come up with more examples that seem to go against things being even remotely under Jesus’ reign or even influence for that matter, than for it.  Sadly you can argue that even the Church doesn’t always seem to reflect being obedient to Jesus’ authority.

With all of that, things seem to be getting worse with each passing day.   There seems to be an endless avalanche of developments that seems hell-bent (pun intentionally used) to undermine any belief in God, let alone acknowledging or obeying His authority.  For example, so many technological advances and modern conveniences we have are amazing.  Granted, I’m easy to please.  Whoever it was that developed a coffee maker that could be pre-set so that coffee is brewed and ready without the laborious work of pushing the button when I wake up and having to wait an excruciating 5 minutes for it to brew is a genius in my book.  Never imagined a day where we would have devices – “smartphones” that now you don’t even need to remember a 4 digit number passcode, you can look at it and instantly you can buy and sell things, even start your car remotely.  But recently there have been reports of how some of those creators of these things are interested in “extending life.”  Initially, it sounded interesting where they wanted to use technology to help conquer disease, to help those dealing with disabilities.  But more recently there’s been these new initiatives – you probably have seen how Facebook is being rebranded “meta” which is this combination of Artificial intelligence, virtual reality that wants people to share more and more of their real selves to enter into this new world… or rather “universe” that programmers have created on their own – with some even claiming to become “gods” themselves with each advancement and an “eternal life” in this universe is their goal.   The sci-fi horror movies are attempting to become true.  It’s crazy.

Our Lord Jesus Christ, King of the Universe…. is it true?  Was it ever?  In this confusion, we find ourselves in the same boat as, of all people Pontius Pilate.  As disconcerting as that is, in this Gospel passage in one of the most dramatic dialogues found in all world literature between Jesus and Pilate, one of the things that is apparent:  Pilate is confused by this claim that Jesus is a King.  At this point, those who are desperate for Jesus to be killed are keeping things far more narrow and say He is simply claiming to be King of Israel.  Pilate is not a stupid man.  He can see that Jesus has provoked such an extreme reaction from these leaders who want Him dead.  But for someone posing such a threat where are His soldiers?  Where are His subjects?  Where is there even the slightest evidence of a defense whatsoever?  None of this makes sense to Pilate.

Pilate is not a stupid man, and he’s far from a good man either.  He is a power-hungry, ruthless leader who has little care or concern for the value of human life, let alone that of any Jew.  So that he even engages in this discussion with Jesus reveals that even the coldest and most selfish and self-centered of human hearts can’t help but be unnerved when face to face with Jesus Christ.  There’s no one that can remain on the sidelines when He arrives.  His very presence provokes a reaction. 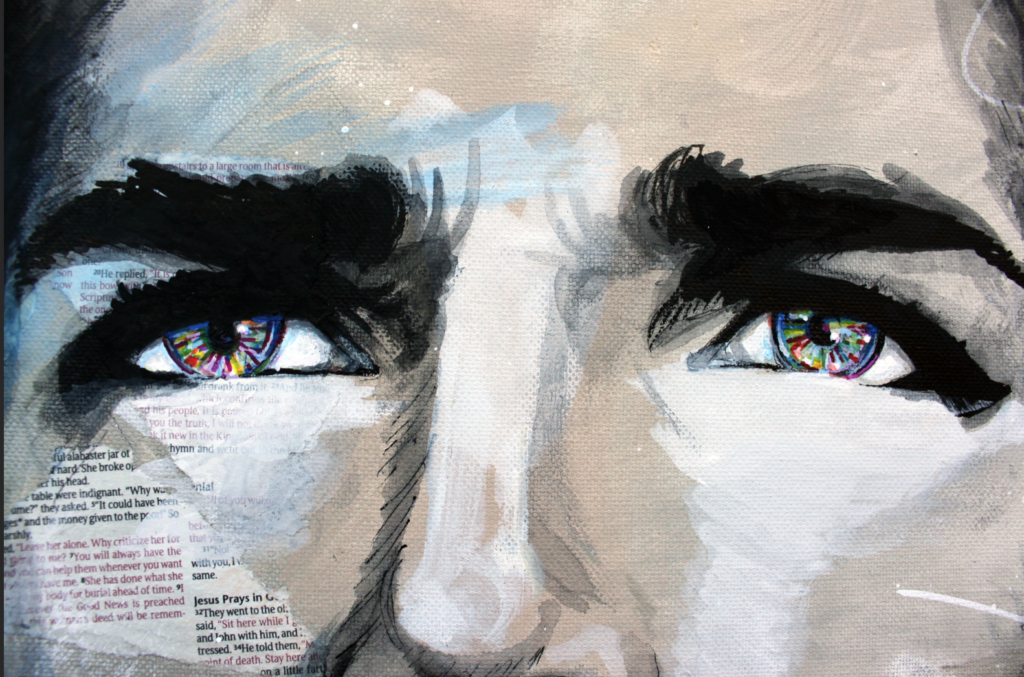 And it is in that cold, conflicted heart of Pontius Pilate, standing face to face with Jesus Christ, that he experiences something he didn’t expect
He doubts himself.
He’s unnerved by the quiet resolve.
He sees something.
What is it that he sees?
It’s so foreign to him, he doesn’t have the vocabulary to identify what it is.
He’s shaken.
Looking into the eyes of Jesus,
he sees the very depths of love that Pilate
has never truly known or experienced but deep within himself,
has longed for. The divine, eternal, creative love that every human being that was, is and is to come – has longed for. And Therein lies the truth, the power, the authority of Our Lord Jesus Christ, King of the Universe. The depth of genuine, sincere love. Love that’s selfless, sacrificial.

We know and have heard countless stories of courageous martyrs, bold witnesses to the faith that have withstood all kinds of evil in every generation since.  Which inspire us and encourage us to the authority of Our Lord Jesus Christ, King of the Universe.  But to this very day, even in the midst of all the threats and attempts to undermine Him, you can still see Jesus’ reign and authority in simple but no less important ways… you can see how His Kingdom advances in the lives of us His followers when we choose to submit ourselves to His reign.

Just some examples that come to mind –

A friend told me about he and a friend of his a few years ago had a bit of a rift, mostly done via email over all things politics.  He didn’t think much of what he considered a minor debate and thought that they had fallen out of contact since this friend had moved out of state to Arizona.  A few months ago learned that his friend’s mother had passed away and reached out to extend his sympathies and sent a fruit basket to the house.  In response, he got an email that one sentence thanked him for his sympathies and then proceeded to resume the fight from years earlier.  This friend of mine was so ticked off, he started doing searches through his emails, dug out his old laptop, and started searching that one for old emails to prove how this guy was wrong and he was right.  He was working on his response when he went to Mass and the Gospel that day was Jesus telling us when someone strikes you on the cheek turn and give the other one as well.  And he said it was like Jesus was speaking to him directly.  For the first time in his 50 + years of hearing this Gospel, he couldn’t even remember how many times, for the first time he understood that Gospel and the message.  Was it really important to be right, to prove that he was right?  Particularly at this moment where this apparently former friend of his was mourning the death of his mother (and obviously was struggling in the stages of grief with the understandable step of “anger”), He said he decided, very uncharacteristically to write an apology.  An honest one – not just a begrudging “you’re right I am wrong” just to end a fight that he didn’t really believe – but “I’m sorry I let something like politics come between us.  I’m sorry I wasn’t more thoughtful and attentive. I’m sorry I wasn’t and haven’t been a better friend.”  He humbled himself, selflessly offering love to someone in need.

And the reign of Our Lord Jesus Christ, King of the Universe advanced, one heart (or really two hearts) at that moment.

There are some everyday examples too –

I see it when I witness college students getting up early to join us in Eucharistic Holy Hour or praying the rosary – thinking about their campus, their families, their friends and asking the Lord to bless, to guide them.

I see it getting newsletters from alumni who have given up their lives to serve as FOCUS missionaries on different campuses, looking at the young people here, our missionaries who a year or two ago never even heard of Montclair State University and probably shuttered at the words New Jersey who offer their lives for this campus and this community to come to know Our Lord Jesus Christ and how He is King of the Universe.

I hear it in the voices of people coming to confession, acknowledging their weaknesses, desiring to be more authentic followers, more virtuous, more loving people.

I see it in students coming forward at a time when we keep hearing of how many people aren’t coming to Church, are leaving the faith – this weekend we are welcoming 2 students into the Catholic faith and 3 more are in preparation to become Catholic… along with other students who are a part of a weekly Bible Study,… students discerning a religious vocation.

I see it in all of you, who make it here to Mass every Sunday, who quietly and unassumingly are generous whether in a financial donation or how you volunteer to help someone in need…

Yes, there are many threats, violence, and more examples of evil than we care to recount.  But those behind those efforts will one day join the likes of Pontius Pilate, King Herod, Caiphas, the High Priests, who are all very much dead, and their reigns and authority are relegated to pages of history.  Jesus – the firstborn of the dead – continues to reign.  He calls us to constantly look into His eyes of Love.  To see in Him the answer to all discouragement, fear, and despair.  To recognize in Him the conquering of death and the powers of Hell.  To listen to His voice, belong to His truth teaching us how to live, how to respond.  And when we do, we join the chorus proudly and boldly professing the reign of Our Lord Jesus Christ, King of The Universe.