Every Tuesday our Campus Ministry hosts what we call our weekly “Newman Night,” where we offer our students a free dinner and have a presentation about a variety of Catholic topics.  This past week, the menu was Mexican food from Tinga’s – which for those who are used to Taco Bell, it is an amazing upgrade  – and our guest speaker’s talk was titled with two Latin words: “Memento Mori.”  Fortunately, most of our college students didn’t know the meaning of those words – “remember that you have to die” – or we might have had a lot of leftover tacos and quesadillas.  Death is not something most people want to hear about, think about, or talk about.  It reminds me of when the comedian Jerry Seinfeld shared that an opinion poll showed that the two things people fear the most are number 1 public speaking and number 2 – death, which left him to observe that people would rather die than give the eulogy at the funeral.

Thanks so much for stopping by to read this, my homily for the 33rd Sunday in Ordinary Time -November 14, 2021, for sharing it on your social media posts and your feedback and comments…  I’m also grateful for all those who’ve asked for the audio version and share them as well at SOUNDCLOUD click HERE or from ITUNES as a podcast HERE.  May the Lord be glorified in your reading and sharing Sincerely in Christ – Father Jim

Part of the reason that people fear death is that they’ve fallen for the lie that this life, this world is all that there is.  Even some Christians can fall for that lie – treating Jesus as something we hope is real, betting it’s worth investing an hour a week like an insurance policy but not really believing in Him, trusting in Him.  Letting Him enter into those greatest fears.  Letting Him give us the grace to not just overcome those fears for whenever our ends arrive but transform our present days and how we navigate this difficult and challenging world.  Yet that’s exactly what Jesus wants to do for His followers as we just heard.

Listen again to what Jesus said in today’s Gospel: Heaven and earth will pass away but my words will not pass away.  Those prophetic words were realized in a particular way for his initial listeners.  As they were approaching Jerusalem, as they gazed upon the temple, that city was for them a symbol of the universe while the temple was the sanctuary, the place where God had dwelt among His people.  Within years of Jesus saying these words, the temple would be destroyed, the Jews would suffer another horrific devastation where hundreds of thousands of the People of God would be massacred and a small minority of tens of thousands would survive.  The chaos of that evil being unleashed would make the People of God feel very much like it was the end of the world since for most Jews it sure seemed like it:  this was one of the worst chapters of their histories which had included periods of slavery, of exile, of loss.

But for an even smaller minority of Jews at this time who had become as they were known followers of “the Way” – those who had followed Jesus, witnessed his unjust trial, the horror of His passion, the brutality of His crucifixion and death – had encountered Him risen from the dead, and walked, ate, prayed, with the Resurrected Christ, and then witnessed Him ascend into heaven and then received the outpouring of the Holy Spirit themselves that first Pentecost – for them they were undeterred by this latest chapter that had befallen their fellow Jews.   They heard Jesus preach and teach and came to know Jesus Himself was those “new heavens and a new earth.”  Yes – all that was familiar to them, all that was known, all that they had believed in that had all passed away – but Jesus’ words had not.   And that empowered them to live this life on earth differently.  They weren’t hastening death, but they weren’t fearing it either.  They were focused simply on Jesus and on bringing Him to the ends of the earth.  Despite the fact that just for worshiping Jesus, and speaking His name could mean they too would lose their lives, which many/most of them did.    But they were able to do that with this detachment because they had this single-minded trust and love for Jesus.

That’s not something that ended in that early Church era.  We see and hear examples of that heroic faith throughout the thousands of years that have followed.  Stories that confounds us – where people are able to see past what they lose and recognize that as long as they have Jesus, that’s the only thing that matters. 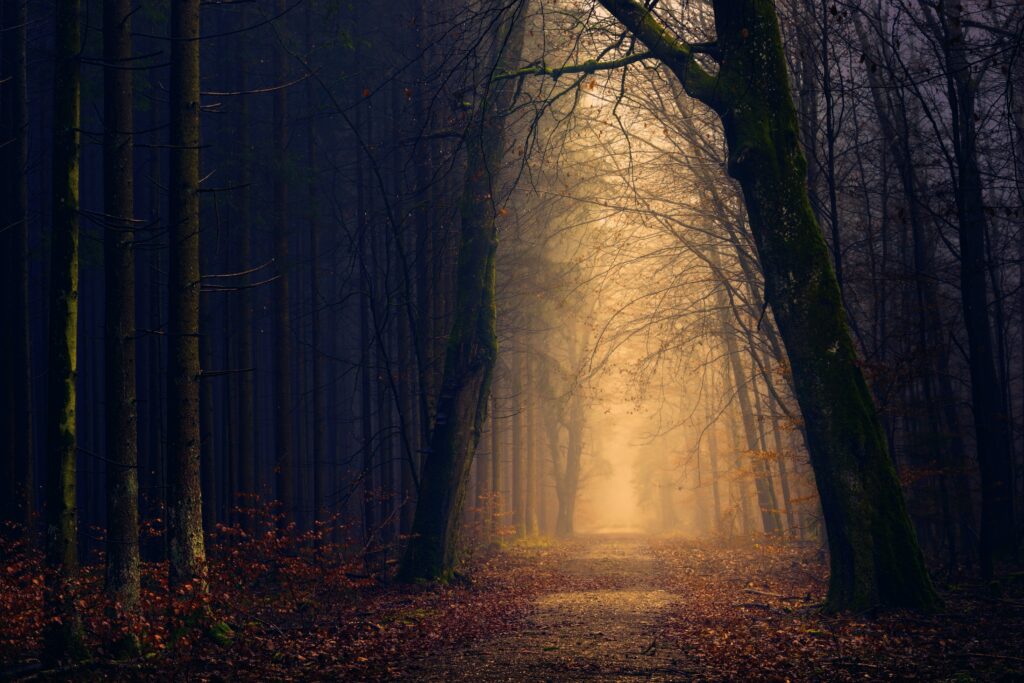 One example that our speaker shared at the Newman Night, was the story of an 11-year-old who lived and died within the last century.  Maria Goretti, whose father had died of malaria when she was 9… whose family was poor, barely able to make ends meet.  Little Maria had this purity and love for Jesus that was utterly remarkable.  This one summer day, while babysitting one of her younger sisters and attending to chores, her 18-year-old neighbor Alessandro knowing she was alone, came to the house and threatened to stab her if she did not do what he said; he was intending to rape her.   She resisted him – not simply out of a desire for self-preservation but even more fighting for his soul telling Alessandro what he wanted to do was a mortal sin and warning him that he would go to Hell.  She kept crying, “No! It is a sin! God does not want it!” He first choked her, but when she insisted she would rather die than submit to him, he stabbed her 17 times before running away.  She was rushed to the hospital, where she lived only for another 24 hours, with one of her last acts saying she forgave Alessandro and wanted him to be in heaven with her.   Just hearing that story, I was struck wondering- would I be able to do that?   Would I be able to lose my life for the faith… would I be able to offer that as a prayer for the one who was killing me?  More than likely I’d be praying that God would get vengeance for me.

Another example that was just published this past week equally confounded me.   A Catholic news site reported a story about a priest who was just sentenced to prison for life….which he deserves.  The horrendous scandal that this man inflicted on his victims, there’s no other word for it other than diabolical.  This crime was calculated, was schemed, took place over years.  The depravity where he targeted these young men, created fake online personas and tricked them into sending inappropriate pictures of themselves thinking they were talking to a young woman in their classes, and then black-mailed them to continue to do so.   Then this priest would pretend to be concerned and want to offer pastoral care as a priest to this young man and his family… I can’t even begin to explain the disgust I felt reading this painful story.   But equally challenging in a different way was reading the words of the Mother of the Victim.  It was almost like a constant refrain throughout this extensive interview she said multiple times – “I love my Church, I love my family. I want my Church to be healed… I feel that God is calling — I feel like it’s a responsibility and I feel it would be totally wrong for me to do nothing and say nothing. I’m doing this for love of my Church and for other people and love of children and love for other parents. I don’t want this to happen to anyone else— this is for our Church and it’s for Jesus too, because he’s hurting.”

I wanted to be angry and furious – I was angry and furious and wanted to remain such, but hearing this woman’s love for Jesus and His Church – left me in awe and reverence for her faith and makes me realize how much work I continue to need to do. Because while she has justifiable outrage and it is important that they receive justice in order for them to experience healing – she has seen her faith as that anchor to navigate the tumultuous seas of evil in our own Church at the hands of one of our own priests.  She recognizes how essential her faith is in this trial, and everyone she and her family are yet to face – including ultimately death itself.

And that’s what these scriptures today are calling for all of us to see and realize.  When we see the words “Memento Mori,” when we hear these verses that confront us with our mortality and the passing of all things, that’s not meant to scare us into being better Catholics out of fear.  They’re a call to deeper faith ourselves.  Where we recognize the fragility of life, the reality of evil that we have faced and will continue to always face.  Doing so by looking to Jesus as the only answer to all of that.  Trusting His eternal words were true then and remain true now when He told us He is “the way, the truth and the life.”  That means confronting those sinful areas within ourselves and confessing them, being absolved of them, and striving to turn away from them.  That means recognizing Jesus’ calls to “Pray, Fast and give alms” isn’t something limited to the season of Lent – but things that we need to do all the time.  Recognizing that when I deny myself when I choose to experience the “little deaths” that come when I fast and give up a meal when I choose to be generous to someone who has no way of reciprocating, I’m aligning myself with Him, and recognizing He is more powerful than those feelings, those desires that the world is constantly telling us to indulge in.  I begin to encounter Christ and experience how living with Him at the center does impact and change not just my life but has ripple effects that affect many others.

If we turn to Him and trust Him and let Him, we too can say Jesus is with us  The Lord remains faithful to us.  St. Maria Goretti and this mother testify in their own amazing ways how in the midst of the chaos of evil, when all seems to be falling apart and there is no relief, no answer to cries for help as they experience in very real ways how “Heaven and earth will pass away…”- this deeper faith in Him sustains them… empowers them to overcome all those awful realities.   They invite us to believe and trust that God who is unchanging will do the same for us…. and finding how Jesus words have in fact never and will never pass away.