Any visitor to my office or apartment would probably be able to get an idea of some of my interests with just a quick look around. Among obviously some religious art work and family portraits, there’s some bobble-heads from the TV show “The Office,” there’s artwork from my nieces and former students, and there’s a variety of things from the comic strip “Peanuts” (mostly of my favorite character, Snoopy).

Thanks so much for stopping by to read this, my homily for the 25th Sunday in Ordinary Time – September 19, 2021, for sharing it on your social media posts and your feedback and comments! For the audio version you can get them at SOUNDCLOUD click HERE or from ITUNES as a podcast HERE. Thanks again… I hope you and yours experience all of God’s blessings today and always! In Christ – Father Jim

Ever since I was in grammar school, I was a big fan of Peanuts… reading the comic strip daily in the paper, collecting books of old comic strips, watching every TV special of it (the picture on top is done by a 9 year old Fr. Jim).  I can still remember the day President Ronald Reagan was shot in an assassination attempt – not because of the tragic history of the day, but because it pre-empted a Peanuts special that was going to be on that night (cut me some slack, I was only 7 years old and in second grade and this was before VCR’s).

When I was in fourth grade, we were allowed to write a biography on anyone we chose. That was an easy decision – I read a book on Charles Schulz the creator of “Peanuts” and wrote a biography about him.  I decided, once our teacher had graded and returned the report, to mail it to Mr. Schulz (particularly since I had drawn a picture of Charlie Brown and Snoopy on the cover that was pretty good if I do say so myself) .  In a manner worthy of Charlie Brown, this one day after school when I was out in the snow with my friends sledding, his office called our house.  The secretary explained she had misplaced my address and that Charles Schulz had read my biography (that he pointed out that my teacher had incorrectly “fixed” the spelling of his name – I had it right, there was no “T” in Schulz, take that Mrs. Katchen).   Anyway, he was so appreciative, he wanted to send me a personalized picture of Snoopy, which my parents had framed which I still have.

I’m still not quite sure what it was that made me such a fan of Peanuts growing up.   I mean compared with the comic-book characters that my friends liked – whether it was one of the super heroes, like Superman or Spiderman, or someone without super powers but ‘super,’ nonetheless, like GI Joe – Charlie Brown is this LOSER.  A lovable loser, but, seriously:

the kid never gets to kick the football,

never receives a Valentine or a Christmas Card.

Heck for some reason on Halloween while everyone else gets candy, he is given rocks (?).

When he flies a kite, there’s a “kite eating tree” out there to devour it.

Even his dog, Snoopy, “Man’s best Friend” right, the one who has to depend on Charlie Brown to feed and care for him, even Snoopy can’t remember Charlie Brown’s referring to him as that “Big round-headed kid.”

It’s might be interesting to try to do a psycho-analysis of a comic strip character and try to pinpoint what it is that resonates with me and millions  of fans.   If I’m really honest it’s because I could relate to Charlie Brown, a lot,  especially as a kid…I was not great at athletics, at all…   not popular, at all…  I was not feeling like I was “super” at anything that I could relate to GI Joe or Superman (if anything, I could’ve used their help on more than one occasion on the playground… ) – yeah, I could identify with Charlie Brown’s struggles.

But what makes Charlie Brown so endearing, is that you never really hear a jealous word out of his mouth.   The most frustration he utters is an AAUGH or Good Grief (see, he even is able to see something good in grief!).   One of his most-often quoted sayings is a litany of things that start with “Happiness is…” as he lists all the small things like “finding a pencil” or a “warm puppy” – seemingly little ordinary things that he finds brings joy into his life.

Charlie Brown  is a hope-filled character, who even though 10,000 times Lucy will pull the football away from him, that 10,001st time he still wants to believe it will be different –   or maybe, just maybe one day the Little Red Haired Girl might notice him… Charles Schulz who was a devout Christian embodied his comic strip and characters with faith, hope and love, showing how even in the midst of a sometimes mean world when so many others would give into despair or depression – happiness can be found, grief could be good, and those virtues will radiate in the midst of imperfection. 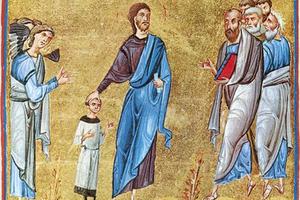 What has to be so frustrating to Jesus in this Gospel today is that these, his closest followers, his apostles seems to have forgotten what “lovable losers” they really are – yes they are incredibly lovable in God’s eyes, but in the eyes of the world they are losers-  and instead of remembering that reality, they have started to believe more in themselves than in Jesus, who was doing all those wondrous things in the first place.  What do I mean?  Well

They’ve even participated in that mission – being sent to heal people in Jesus name.

They’ve heard the voice of God revealing “This is my Beloved Son.”

They recognize that everywhere they go, people are coming to Jesus in multitudes and have felt the excitement of being on a winning team, and all that has gone to their heads. So much so that they forget their lowliness, their weaknesses.

That’s what is going on as Jesus, explains how he is going to allow himself to enter into the Passion, the Crucifixion… listen to that again – Jesus is going to chose to allow himself to enter into that – He could have prevented it if he really wanted to…but He choses to still do that because he understands that the most common thing everyone of us goes through is that we all will have our Charlie Brown moments (if not worse) – everyone of us experiences suffering, experiences pain, experiences loneliness.. No human being is immune to these things happening at some point.

So Jesus shares with these men, who themselves have experienced all of those things, His revolutionary, new plan.  He’s saying:   Yes, I can and do work all kinds of miracles…  I can bring people back from the dead... but I’m going to enter into this experience, embracing the Cross, carrying the Cross  to give people a reason for them to maintain Hope in the midst of all those experiences when they too embrace and carry their cross– if they choose to have Faith in me and live in my Love  – – – they will find me there…  But the disciples remain silent, confused.  They can’t or don’t want to understand what Jesus is talking about with these prophecies of doom for Himself.  They’d rather focus on the successes, the excitement of crowds reacting to Jesus’ miracles and imagine themselves, one day being embraced by excited crowds seeing them do miraculous things.  The disciples forget all their lowliness, their own weaknesses – they want to forget that it was in those exact spaces and places where Jesus first met them, when they were down and out, weighed down in sin, rejected by the world – in their ‘loser’ moments and instead start arguing about which of them is the greatest!

Jesus wouldn’t mind that they desire to be great disciples.   But that’s not what they’re arguing about.  They’re debating who is the greatest. They’re arguing probably asking  Who did what for whom – as they try to decide what was more notable and important – or Who did Jesus call first, last?  What about that time you did such and such…  They’re interested in performing great, exciting, popular things… saying inspirational things like Jesus does, thinking that if they can perform like He does, they will be as great as He is.   They’ve allowed their human ambition to blind them from God’s direction, His will, His plan.   Jesus’ reign, His kingdom will be established, one heart at a time.

Jesus turns it all around on them:  “You love me?” he asks. “You want to be great? “ he challenges.  Then be great by following my example.  Putting a child in their midst, who has nothing to offer, can not repay any kindness, He calls them to serve, take care of such as these – children, little ones… or more broadly, those who have no power, whose human dignity has been diminished, ignored, violated… those whom the world dismisses as problems or obstacles that they’d like removed.  Jesus tells His followers they will become great, they will glorify Him when they serve, when they take care of, when they help those who are weak and in need, like little children.

Because yes, Jesus’ words in scripture are powerful and meaningful in profound ways in the hearts of believers – but communicating Him and His word to those who don’t know Him, that is initially done when we resist selfish ambition, when we allow jealousy to die in our lives, when we re-direct our self centered desires to a God-centered vision of putting others first.   Yes, Jesus can be found in awesome, amazing miracles for sure, but He is most commonly seen in the miracle of selflessness when someone defends someone being mocked or gossiped whether on the playground or the workplace.  Jesus is real and present, Body, Blood, Soul and Divinity in the host we receive at this Most Holy Sacrifice of the Mass – but He is made real and present when we accompany someone who is sick, who is lonely, who is dying.

In doing so, the simplicity of the loveable-loser Charlie Brown starts to make sense.  We begin to see his little lessons of faith, hope and love on an even larger scale.  Where our world is transformed by the the sharing and receiving of Christ’s love:  where grief is actually transformed into something good;  that we find the real meaning of what happiness is.