A farmer, a meteorologist, and a firefighter… sounds like the start of a bad joke.  But these three guys:  Jason, Craig, and Steven came to mind this week.  On the surface, just hearing their names and some brief descriptors for them, they probably wouldn’t strike people as too memorable: Jason a farmer in North Carolina – Craig who gives the weather forecasts on the broadcast team of WKBN in Ohio and Steven a member of the Fire Department of New York (FDNY).  Yet they each exemplify “greatness” -the true greatness that Jesus calls for in this Gospel and something that at this point, Simon Peter doesn’t yet understand.

Thanks so much for stopping by to read this, my homily for the 24th Sunday in Ordinary Time – September 12, 2021, for sharing it on your social media posts and your feedback and comments! For the audio version you can get them at SOUNDCLOUD click HERE or from ITUNES as a podcast HERE. Thanks again… I hope you and yours experience all of God’s blessings today and always! In Christ – Father Jim

Jesus asks the disciples a pretty straightforward question – Who do people say I am – what is the reaction and response from people to all that I’ve said and done?  Jesus has said and done quite a lot by this point in the Gospel.  Last week at Mass we recounted how he cured a man who was deaf and mute; not long before that He had raised someone from the dead; there was the miracle of 5-10,000 people being fed with a few loaves and fish.  Suffice it to say, Jesus has definitely commanded people’s attention, their curiosity, and wonder as they recognize something profoundly different, something great but hard to define about Jesus.   It’s so unprecedented that crowds are trying to make sense of it from what they did know,  saying He’s the return of Elijah, He’s John the Baptist come back from the dead, or another great prophet.

From those closest to Him, those who have followed Him before, during, and after those miraculous experiences – Jesus expects more… and so He pushes them as He asks “Who do you say I am?” Peter seemingly makes an instant, spontaneous declaration “You are the Christ.”  Peter’s recognizes that, by all that Jesus has said, all that He has done, that here is the one that the Jewish people have been waiting for, for centuries – the long awaited King of Israel who will set all things right.  Yet within moments of Peter’s correct response he finds himself very wrong…  Jesus starts talking about the rejection that He will experience, that Jesus will be falsely accused, killed in horrific, brutal fashion on a cross.  Peter finds himself arguing with Jesus.  He’s understandably confused – how is it possible that the one who made the deaf hear, the mute speak, the blind see, the dead rise – how is it possible that such awful things could happen to Jesus?  How is it possible that Jesus would even allow those things to happen?  Jesus has demonstrated He’s got power, He’s got authority, He’s got everything anyone could ever want or need.  There’s no way such things could or should ever happen to the Christ.

You wonder if Peter thought Jesus was trying to use reverse psychology on them, wanting Peter to be even bolder in his testifying to who Jesus was.  But Peter probably never imagined the next words he’d hear from Jesus would be “Get behind me, Satan.”   It seems harsh?  Like the most ultimate of smackdowns.   But,  Jesus isn’t trying to embarrass Peter.  Jesus loves Peter and He wants Him to recognize that he’s wandered into satanic thinking…  This is what happens whenever we’re not thinking not as God does, but as human beings do.  Namely focusing on things like power, authority, wealth, fame – seeing greatness as coming from those pursuits, and becoming desirous and possessive of them.   Because very quickly they become easy for humans to make into idols or even gods of them. 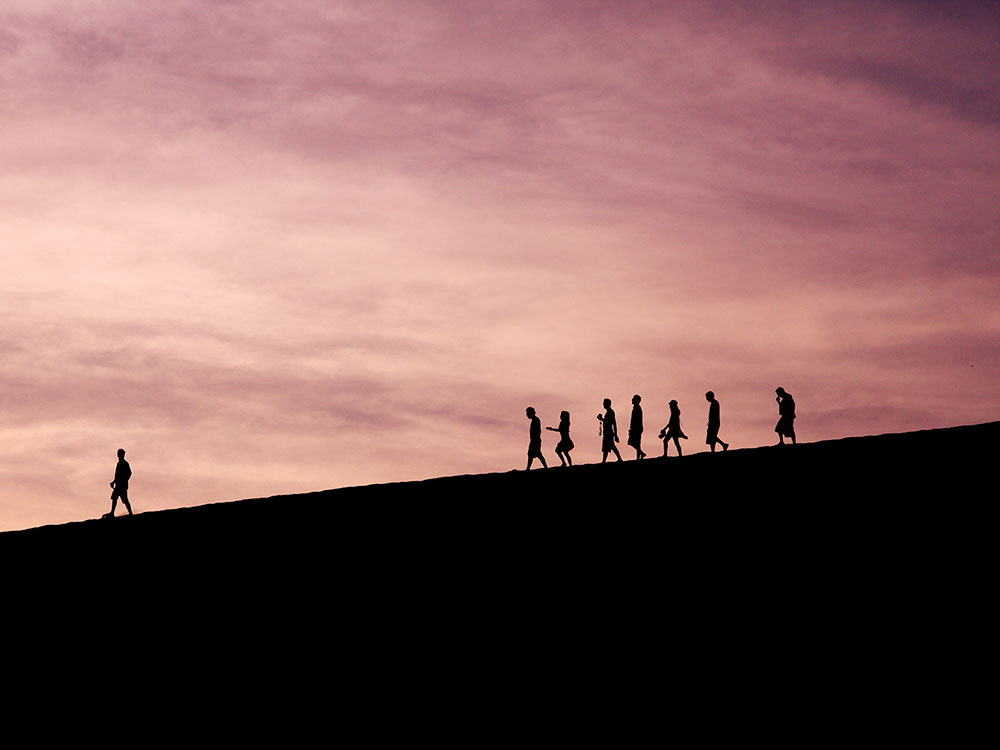 And that’s not what the farmer Jason, the meteorologist Craig, and the firefighter Steven are testifying to, in their own, unique ways.  Jason Brown, before he was in North Carolina trying to figure out how to contend with a 1,000-pound cow and the intricacies of growing fruits and vegetables, had signed a $37.5 million contract with the NFL.  Craig Ziobert, a 31-year-old weatherman for the local CBS affiliate in Youngstown Ohio, which was setting him on a career trajectory that could have launched him into a bigger market and greater fame and advancement, just a few weeks ago has announced he was leaving the anchor desk to begin formation to become a Catholic priest.  Stephen Siller had the job and life he had always dreamed of: a firefighter with the FDNY, married with five kids to who he was devoted to.   Twenty years ago yesterday – after finishing his tour and on his way home, about to meet his brothers for a day of golf – he heard the devastating news of a plane hitting the tower of the World Trade Center.  Instead of continuing home, he turned his truck around, started driving to the site and ended up stuck in traffic as countless throngs of people were fleeing.  He abandoned his truck, grabbed his gear, and ran through the Brooklyn Battery Tunnel towards the towers where he joined the hundreds of other firefighters, police officers and rescue workers who gave their lives doing the same rescuing thousands from the horrors of the terrorist attacks of September 11th.

Jason’s decision to leave the NFL, Craig’s decision to pursue priesthood, Stephen’s story of selflessness are all examples of coming to know, coming to love God and thinking as He – not the world – does.

It was tempting for Jason to stay in the NFL, and with all that money he could have helped feed a lot of people rather than establishing First Fruits Farm which gives away all the food that they raise for people in need. It was tempting for Craig to continue his career and help at his parish, on the side, in his off time. There are some who might have been in Stephen’s boots and truck and thought, “I’ve finished my tour, my duty, I have other responsibilities, too, let someone else handle it.”  But each of them recognized that death is inevitable for every single one of us.  What will ultimately matter is what will we have done with this one life that we are living?  Jesus in today’s Gospel raises the bar considerably:

Whoever wishes to come after me

For whoever wishes to save his life will lose it,

but whoever loses his life

for my sake and that of the gospel will save it.

Jason Brown said he knew he was blessed beyond measure and asked Jesus what he could do with all his gifts.  He said the Lord called him “to feed my people” which resulted in what he describes as the “ultimate of trust falls” that led him and his wife from a mansion to living on a farm.  But they look back at that decisive choice and say they would “never choose to go back.”  Craig Ziobert  has had a lot of reactions to his leaving his job as a weatherman and pursuing the priesthood, but more than a few asking how would he ever want to be a priest – when he has so much already and could just do that religion thing on the side – to which Craig responded honestly it’s just something you can’t really describe, sometimes. It’s just one of those things where you know where you’re supposed to be in life.  For Stephen Siller, his death among the close to 3,000 others who died on that day has not left those who knew and loved him simply stuck in grief and mourning.  His family has never stopped being inspired by his selflessness and sacrifice, and found their own way of following in his footsteps.  In the last 20 years, their “Tunnel to Towers foundation” has raised over $250 million dollars through their annual fundraisers to help others who, in their service to others, are injured or assist their families in the case of their deaths.

Most people on some basic level have a desire for their lives to mean something, for them to be remembered, in some way.  We are living in a world that seems to be growing more and more desperate for attention, for acknowledgment, for affirmation, for ‘likes’ – that is paralyzed by fear over the slightest threat to those things, or even the slightest whiff of suffering.  That can afflict our faith life.  We can begin to treat our relationship to Jesus as being some sort of an insurance policy. We reach out to him when we are in need and want Him to fix a problem.  We keep the premium paid for the life insurance, so to speak, so we’re covered when we die.

If that’s our thinking, we are in the company of Peter in this Gospel passage- thinking not as God does but as humans do.  We’re trying to live and preserve our life, according to comforts and pursuits of this world.  Jesus isn’t condemning us for thinking as humans do – but He doesn’t want us to remain there – lulled into a life that is wasted accumulating things, tempted to pursue power, authority, fame.

Jesus is calling us to something more.  Calling us to follow Him by freely choosing to carry the Cross ourselves.  Recognizing how that in His death on the Cross and even more His resurrection, God has upended the universe. Namely that true greatness is only found in Him.  And can be seen in our decision to follow Him, to imitate Him.  Like when an NFL player turned farmer Jason and instead farm for food to feed the poor we let go of wealth and fame – like when the former weatherman now seminarian pursuing priesthood Craig we let go of ambition and success, like when like Firefighter Steven we even lay down our lives for others… They are just a few of the countless hosts of followers who have heard Jesus’ call, trusted His voice, aligned their hearts, minds and lives to the mind of God and His vision.

Will we follow?  Will people know that we are setting off on a different path, a path they should want to pursue for meaning and joy in this life and the life to come?  It will be seen in our capacity to forgive.  It will be found in our being sensitive to the needs – physical, emotional, spiritual, needs of others.   It will be experienced in our willingness to share.  It will be demonstrated in our commitment to our neighbors – near and far…  In countless ways, in the ordinary every day we find those moments of decision where either we’re thinking as Humans do or as God does…  May we trust Jesus, embrace the cross, and find the truth that St. Mother Teresa once said after a lifetime of doing the same:  “I have found the paradox, if you love till it hurts, there can be no more hurt, only more love.”