Back in 1979, 257 people left New Zealand for a sightseeing flight to Antarctica.  Unknown to the pilots, there was a 2-degree error in the flight coordinates.  Most people hearing that would think that’s “close enough”- but that 2-degree error in fact it placed the aircraft 28 miles to the east of what was the planned route.   As the pilots approached what they thought was their intended destination, to give the sightseers a better look of the beautiful landscapes they descended to a lower altitude.   Although the pilots had years of experience, they had never made this particular flight before. So they had no way of knowing that the incorrect coordinates had placed them directly in the path of Mount Erebus, an active volcano that rises from the frozen landscape to a height of more than 12,000 feet.  Sadly, the plane crashed into the side of the volcano, killing everyone on board.  It is hard to imagine how this tragedy of epic proportions was brought on by a minor error—a matter of only a few degrees.

Thanks so much for stopping by to read this, my homily for the 22nd Sunday in Ordinary Time – August 29, 2021, for sharing it on your social media posts and your feedback and comments! For the audio version you can get them at SOUNDCLOUD click HERE or from ITUNES as a podcast HERE. Thanks again… I hope you and yours experience all of God’s blessings today and always! In Christ – Father Jim

The reality is the effect of being off a few degrees, the longer you travel, become more obvious.  People far smarter than I explain that if you’re going somewhere and you’re off course by just one degree, after one foot, you’ll miss your target by 2/10ths of an inch – not a big deal.  After 100 yards, you’ll be off by 5.2 feet. Not huge, but noticeable.  After a mile, you’ll be off by 92.2 feet. One degree is starting to make a difference. After traveling from San Francisco to L.A., you’ll be off by 6 miles. If you were trying to get from San Francisco to Washington, D.C., you’d end up on the other side of Baltimore, 42.6 miles away.  Traveling around the globe from Washington, DC, you’d miss by 435 miles and end up in Boston.  In a rocket going to the moon, you’d be 4,169 miles off (nearly twice the diameter of the moon).  Going to the sun, you’d miss by over 1.6 million miles (nearly twice the diameter of the sun).  All of that is because of being off by a single degree.

It’s easy for us whenever we encounter the Pharisees in the Gospels to dismiss them as “the enemy.”    Especially for us being on Team Jesus, we know that they are constantly battling and debating with Him, questioning Him in accusatory tones, and looking to undermine Him.  Even with this scene we just heard in this Gospel passage, where they are supposedly upset that these ritual cleansing and traditions were not being followed – there’s no reason they couldn’t have asked Jesus about that in private.   That they lodge their accusations in such a public way is to humiliate those who didn’t do what was expected and embarrass and imply this was Jesus’ fault that He either allowed for such irreverence or to discredit Him implying His teaching was false.   The irony is that they are insulting the Son of God by claiming He doesn’t care about His own law.  But how did they get to this point?   The Pharisees being a group of Jews who are distinguished by the claim that they were experts in God’s law and strict in their following of it – how could they have been so oblivious and blind to God incarnate, standing and speaking right in front of them in Jesus?   It was a matter of a few degrees. 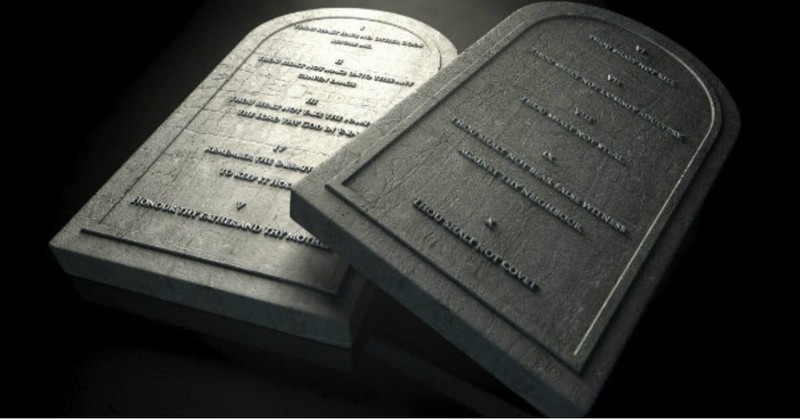 God had entrusted His Law, His Commandments to His Chosen People, the Israelites as a way of establishing a relationship with them.  We heard that in the first reading, how through His servant, Moses God explains the importance of the Law to the people telling them to “observe them carefully” so that they “may live.”  God had led His people out of slavery, through the wilderness, to the promised Land.  He wanted His people to flourish as individuals and as a nation.  He was giving them these laws and commands, this direction – not to limit them and ruin their fun – but ultimately for their well-being, their happiness, their health.  Knowing that when they flourished, they would stand out from every other nation on earth and to peoples who had followed false gods, which made them focus simply on their human wants and desires.  The nations, the people, would look to the Jews as a “great nation…wise and intelligent people” by their following the law.

Just reading through the entirety of scripture, we find people struggled with obedience then just as we do now.  Those human impulses to want to do our own thing, our own way creeps up again, again and again.  Tempts us to believe why we’re exempt, or there’s a loophole where we can claim that in terms of following God’s law we’re “close enough” not realizing that we’ve moved a few degrees that will lead us to get more fast and loose with things.  On the other extreme, people could get so scrupulous over external, minimal things and move them a few degrees in the other direction that they don’t realize how their observance of the law had displaced God and what was most central to Him, which is establishing a loving relationship with us.

In one sense you can appreciate the Pharisees’ desire to get it right.  Centuries after Moses first led the people, uttered these words, the Jews had struggled and failed to remain faithful to the Lord.  It had resulted in the loss of the promised land, exile, destruction of the most sacred place on earth – the temple, the loss of the Ark of the Covenant.  Things were so bad that they knew that only God Himself would ever be able to set things right again.   The prophets promised them that would happen, God would send the Messiah who would save them.  And they waited… and waited…. and waited.  Thinking that it was their disobedience to the Law that had gotten them into this predicament, the Pharisees went to the other extreme thinking perfect adherence would bring about the Messiah’s coming.

They didn’t realize they had shifted their focus just a few degrees.  Because now the Law wasn’t about changing their own hearts to getting perfectly aligned with God and being in a relationship of love with Him and His people.  It became something that they had to do and make sure everyone else was doing perfectly, at least on the surface.  So a wise custom-like washing hands before every meal, a helpful prescription like cleaning cups, jugs, kettles, and beds which were good things for the health of the people (still are by the way) becomes part of a whole litany of other rules and ordinances that weren’t bad on their own but had lost sight of the reason God had given them law in the first place.

God wants humanity to deal with what is unclean within the hearts of each and every one of us, within the brokenness of humanity.    That we have desires that can lead us to selfishness and self-centeredness.  That we have thoughts that can delude us to think we’re gods ourselves.  That those thoughts and desires can lead to bad behaviors – like the litany of examples that Jesus gives us in this Gospel.

Today’s scriptures seem perfectly directed for those of us who find ourselves here today.  Because the fact that we’re here is a great thing that demonstrates we desire a relationship with God.  That we recognize that we didn’t just summon ourselves into existence – and that with so much division and anger in the world around us, there doesn’t seem to be any examples of humans flourishing of peace, of love by following a mere mortal, a fellow human being… even the noblest of earthly, human leaders is imperfect and is only noteworthy because they are striving to follow God and His law themselves.

This means every one of us needs to do some self-evaluation to see if (or rather how many) degrees off we might be in our following the path, the journey to God.    For the Pharisees, had they allowed Jesus to alter their course, they could’ve taken their knowledge of scripture, their fierce drive, and passion to turn inward and been overwhelmed with how he was fulfilling all of their hopes and dreams in real-time.    For most of us, the bigger issue we’re facing in our day and time isn’t an obsession with externals.  Instead, we’re surrounded by a greater number of voices that delude us into believing that God’s law is not important, or that it’s up for interpretation.  That Jesus came to relax everybody and everything.  All that matters is that “we’re good people” – whatever that means since “good” is being treated as a floating, flexible definition.

Jesus happily wants to set us back on course – no matter how many degrees off we might be – into experiencing the fullness of life now and with Him for all eternity.    He offers us the gift of reconciliation where if we’re mindful of things that have come from our heart that have defiled us, we’re simply one confession away from being absolved and forgiven.  He offers us His very body and blood in the Eucharist to nourish that desire deep within that wants to follow Him and needs His grace and strength to persevere in doing that.  Will we be humble enough to recognize we are off course and need His correction?