Latest News
Home /Blog/IF YOU CAN SEE HER, YOU CAN BE HER

In recent years, there’s been a renewed energy in the feminism movement. At its core, the primary goal is advocating for equality between men and women.  Historically we can see how wrongs were addressed through the pioneers, followers and supporters:  from securing women’s right to vote; gaining accessibility and opportunity for different jobs and education; advocating for fair and just wages.  More recently with the “Me Too” movement, many brave women have come forward and shared stories publicly of sexual harassment or assault by politicians, celebrities, athletes – which brought some painful realities that had been ignored and somewhat astonishingly tolerated and accepted – to light.   The Me Too movement morphed into “Times Up” where those atrocities and those who committed them were finally being held accountable.

Thanks so much for stopping by to read this, my homily for SOLEMNITY OF THE ASSUMPTION OF THE BLESSED VIRGIN MARY – August 15, 2021, for sharing it on your social media posts and your feedback and comments! For the audio version you can get them at SOUNDCLOUD click HERE or from ITUNES as a podcast HERE. Thanks again… I hope you and yours experience all of God’s blessings today and always! In Christ – Father Jim

One outgrowth has been to find ways to encourage women to embrace their dignity, their potential, their belief in themselves – through positive, affirming messages that encourage girls, young women, and women, in general, to tap into something deep within themselves – for confidence, for acceptance of their beauty as coming from within no matter what our image-obsessed culture dictates.  Two examples that have come up in recent campaigns that you see and hear pretty regularly have been: “If you can see her, you can be her” and “She believed she could, so she did.”

Those messages being so heavily promoted kept coming to mind in anticipation of today’s feast.  It strikes me that those words are even more powerfully realized in the Blessed Virgin Mary who we celebrate in a particular way today.

This Solemnity of the Assumption of the Blessed Virgin Mary commemorates how, at the end of her earthly life, Mary was taken body and soul into heaven. This event isn’t found explicitly in scripture but is a belief that has been passed down from the early Church, who recognized and reflected on Mary’s unique role and place in the life of Jesus. First, we believe that Mary was free of original sin (which we celebrate with the feast of the Immaculate Conception of Mary on December 8). Since Jesus was holy and sinless, He was God who became Man in Mary’s womb, so God cleansed her of original sin in anticipation of His coming. So at the end of her earthly life, she would have not experienced the “corruption of the body” that comes from death, one of the effects of Original Sin – which will be finally vanquished at the end of time.  So Mary basically got the advanced graces of Baptism we’ve received and experienced the resurrection of the body that all of us hope for.

That’s not to say that Mary’s being assumed into heaven body and soul at her death doesn’t have any biblical evidence. The first reading for today comes from the Book of Revelation which was a vision that was given to St. John.  St. John talks about the “Ark of the Covenant” being seen. Sadly for many Catholics, hearing “Ark of the Covenant” the bulk of their knowledge about the Ark comes from Steven Spielberg and Harrison Ford with the film “Raiders of the Lost Ark.”  Suffice it to say, that film did get some aspects right.  The Ark contained the Ten Commandments given by God to Moses, as well as some manna – the heavenly bread that sustained the Israelites on their journey to the Promised Land, as well as the priestly rod of Moses’ brother Aaron.  These three things contained in this sacred ark were the holies of holy things for the People of God were concrete reminders of God’s presence carried with them through their time of wandering in the desert, when they finally entered into the Promised Land, and eventually built the temple.

Because of Israel’s falling into sin, having the Promised Land conquered, the people exiled, and ultimately the temple pillaged, the ark had been removed and hidden by the prophet Jeremiah with the promise that it would be “found” when God in His mercy gathered all His people once again. 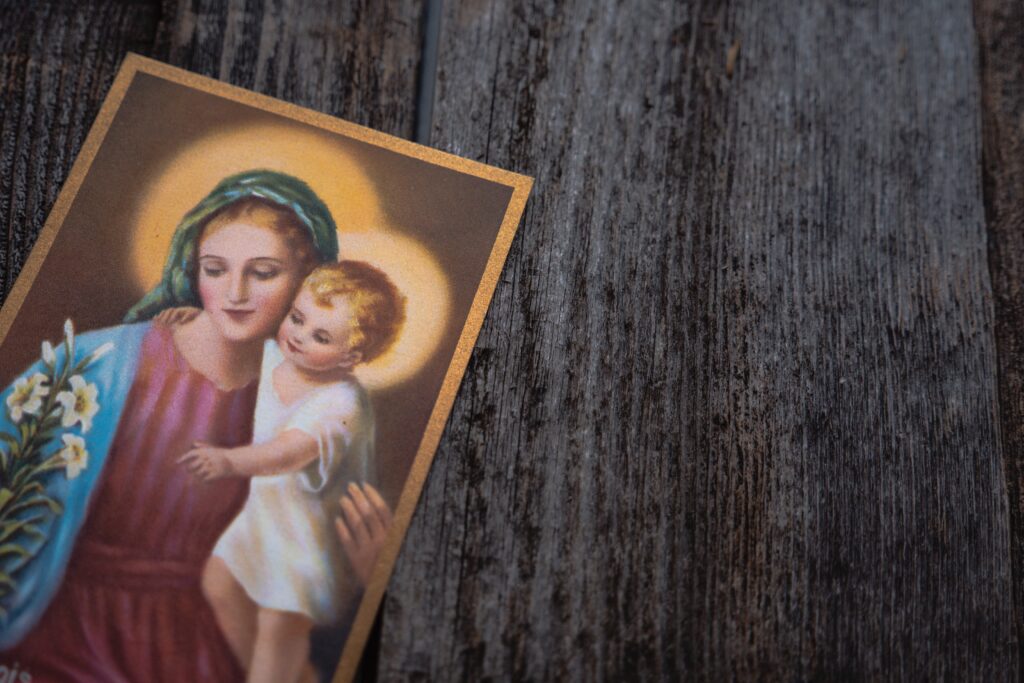 John saying in today’s reading that He saw God’s temple in heaven opened, the ark being seen, and then he immediately describes it as a woman giving birth. We’ve come to identify that “new ark” as Mary. Her womb contained Jesus the “Word of God” incarnate (replacing the stone tablets of the Ten Commandments), the eternal High Priest (surpassing the priest Aaron’s rod) and the Bread of Life (which, as we’ve been hearing in these Gospels the last few weeks at Sunday Mass, is greater than manna, His flesh and blood given to us in the Eucharist). We see in these references a biblical allusion to Mary’s being the new ark in our new covenant. Having so faithfully responded to His call throughout her life, we see how God would have desired to protect and distinguish Mary at the end of her earthly life.

God has raised her up not just physically into heaven, spiritually as our Queen Mother, but as the primary example of the perfect disciple. And so, we can truly say if you can see her, you can be her.

Because the Blessed Mother teaches us:

+To realize our potential, our belief doesn’t just come from some internal self-reflection but can be found in believing what was spoken to us by the Lord. Who we are, whose we are, what our vocation in life is all being tied to the Lord – and like Mary believing that if we remain tied and focused on Him, it would be fulfilled.

+ To come to know, and to testify that the source for true beauty comes from the “greatness of the Lord” that shines when “my spirit rejoices in God my Savior” that He favors us too.

We are invited today to recognize in the Blessed Virgin Mary, our Mother, the perfect model of discipleship who was open, attentive, and obedient to God’s word, for us to keep her in focus. To remember her, to imitate her so that, in a way If you can see her, you can be her… Not solely because of her action, but because she believed she could so she did…  She believed she could trust in God, respond to His calls for her life and so she did, become his Mother and ours as well.