“We’re human, too” – was the quote that made up an unconventional headline out of the summer Olympics this past week.  Particularly since we’re so used to hearing from the medal winners or from an individual who has just set a new record, what made this especially noteworthy was that headline and those words came from a young woman who didn’t compete at all.  Simone Biles who has been called one of the greatest gymnasts of all time for the United States Olympic team, and considered one of the leaders for her fellow athletes, this past Tuesday shocked the sports world withdrawing from the competition.  She explained that physically she felt fine, but was overwhelmed with the mental stress, the pressure she was feeling to perform. She didn’t believe she was in the right headspace for the competition – which she explained as she said “We’re human too”

Thanks so much for stopping by to read this, my homily for 18TH SUNDAY IN ORDINARY TIME- August 1, 2021, for sharing it on your social media posts and your feedback and comments! For the audio version you can get them at SOUNDCLOUD click HERE or from ITUNES as a podcast HERE. Thanks again… I hope you and yours experience all of God’s blessings today and always! In Christ – Father Jim

What made it so remarkable though was that in front of an international audience, one of the most public stages you can find, you had someone very vulnerably owning her weakness and courageously sharing it with this bold step that by the reaction caught many by surprise.  In some ways, it even eclipsed some of the winners and celebrations that usually accompany those triumphs.  All week those words “We’re human, too” have been inspiring a lot of thought, discussion, and reflection for fellow athletes and commentators.  What exactly does that mean?

We are so often tempted to believe that our identity, who we are is tied to what we achieve.  And that we are diminished by our weaknesses.  We let the accuser (that would be the devil) lie to us and say our failures, our sins, our setbacks are what define us.  And because so much of our culture our world is consumed with feeling-oriented affirmations, we can find ourselves looking for that satisfaction in external things.  People tell themselves and are convinced that “When I get that job or that promotion” “If I get accepted into that school or program or team” “When I win, if I get the gold” – then – I’ll be happy, I’ll be satisfied.

But the reality is those things often result in a moment of happiness and satisfaction that will pass.  That job or that promotion will eventually have stresses, similar (and possibly greater) than the ones you had before you got that job or promotion.  The excitement of getting accepted to that school or program or team often brings expectations (whether real or imagined) to perform in a way to justify getting into them.  And the athlete or team that triumphs, the day after the celebration end, the questions, about whether you can “do it again” often begins.  When we are pursuing things of this world, when we tie our happiness and satisfaction to them, when we pin our identity to them – we find ourselves constantly on that hamster wheel spinning a lot of energy – but not really moving anywhere.

Which is what is happening to the crowd in today’s Gospel.  This is the 2nd of 5 weeks that we will be hearing from chapter 6 of the Gospel of John.  Kind of like a mini-summer retreat to focus on one of the most treasured sections of scripture where the focus is on the gift and mystery that is the Eucharist, that Jesus gives us His very flesh and blood to eat in the communion we receive – that He is as real and present in that host as He was 2,000 years ago speaking to His disciples.  We started last Sunday with John’s recounting how Jesus was able to feed 5 – probably closer to 10 thousand people by taking the 5 loaves and 2 fish and miraculously multiplying them to the point that everyone, as John put it, ate as much “as they wanted” and ended up with 12 baskets of leftovers.  They were full.  They were satisfied.  And they digested that food.  And it’s now the next day.  And understandably, they were hungry again.  That’s what causes them to search out Jesus again the next day.  They were looking for the one who did the miracle of the loaves and fishes to do the miracle of the waffles and eggs (so to speak) The miracle had caught their attention in providing abundant food to a hungry crowd. You can’t blame them for wanting some more. 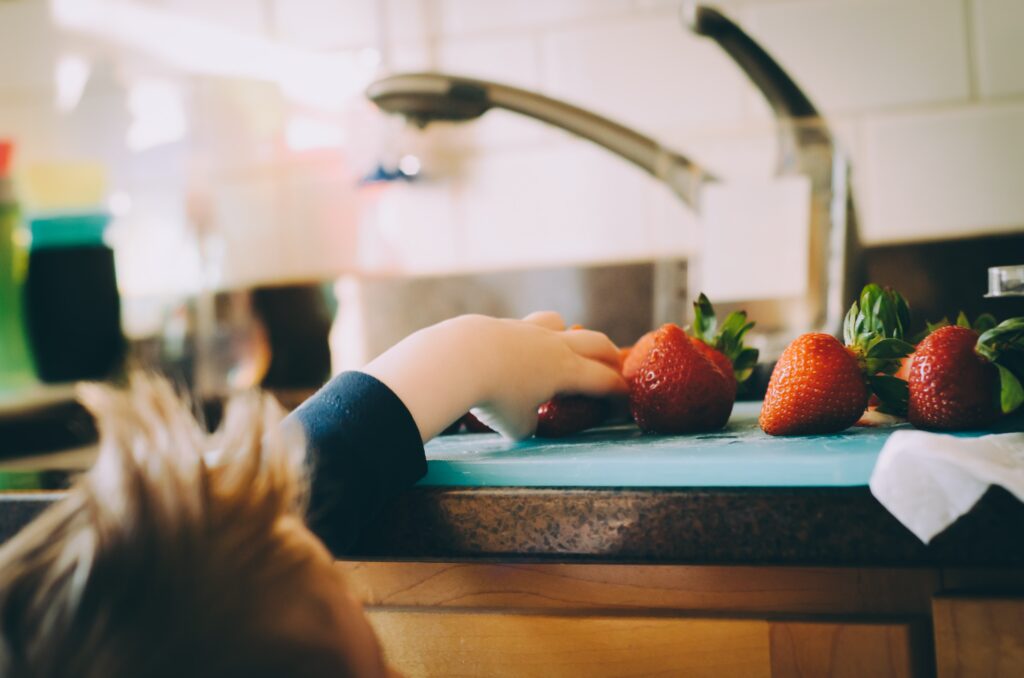 Jesus wants to open them up to seeking some-thing more: “Do not work for food that perishes but for the food that endures for eternal life, which the Son of Man will give you.”  That changes the conversation and focus.  Not just in that moment for the hungry crowd, but for anyone curious about who they are as human beings, why are we here, where are we going.  Jesus wants us to be clear that we are created by God, we are made for communion with Him, He wants us to have Eternal life.

This puts the crowd in the Gospel in an awkward spot.  They know what Jesus is capable of and able to do.  They witnessed and experienced it themselves how seemingly effortlessly He was able to attend to a very human want and need, which has now returned.  But do they accept that miracle as a sign of who Jesus is, God incarnate and now listen to what He’s saying to them?  Or will they stay fixated on the human wants and needs?

This is why we heard in that second reading from St. Paul to the Ephesians today saying to us “put away the old self of your former way of life, corrupted through deceitful desires, and be renewed in the spirit of your minds, and put on the new self…”  He’s telling us to resist that human urge to limit our visions and pursuits that are consumed with gaining physical pleasure and minimizing physical pain… that fixates on being validated and affirmed in the things and honors of this world and instead to live lives that are on that “new self” that we became when we were baptized… in short, we are to desire the food Jesus is offering, renew our minds by doing the works of God, believing in the one He sent.

The crowd says they want this food, this bread of life “give us this bread always” – there’s a desire, there’s a fascination with Jesus.  But do they really want this? Do we?  Truth be told, I would probably be with that crowd who had the free dinner and now was looking for a Pop-tart the next morning.  We are so often distracted by the day-to-day with legitimate concerns and worries – which is completely understandable.  And Jesus doesn’t want us to feel bad about that.  He wants us to go to Him with those things.  He wants us to have faith in Him and to trust Him.   But once we do, then we have to be open to what He says to us about ourselves.

When the accuser (that would be the devil) lies to us and say our failures, our sins, our setbacks are what define us – He looks at us from the cross and tells us, come to me here, bring those sins to me in confession, receive my absolution and mercy, you don’t ever have to think about these things again.  He wants us to never forget that yes we’re human – but we have eternal souls that are infinitely more important and precious.    He wants us to get to a place that if I get that job or promotion or not… If I get accepted into that school or program or team – or not whether I win, get the gold or lose, or can’t compete at all – that doesn’t change our identity that He died and rose again from the dead for, so we would become God’s beloved Sons and Daughters.

One of my favorite quotes from Pope St. John Paul II captures this so beautifully:  “When you dream of happiness; He is waiting for you when nothing else you find satisfies you… provoked you with that thirst for fullness that will not let you settle for a compromise, who urges you to shed the masks of a false life, who reads in your heart the choices that others try to stifle, Jesus who stirs in you the desire to do something great with your lives.”

My brothers and sisters, may we not let anyone or anything of this world deflect us from that truth, make us forget who we are, what we are which we do when we take to heart Jesus’ words:  “This is the work of God, that you believe in the one He sent.”