Have you ever felt like a failure?  Or maybe a better question is “when was the last time you felt like a failure?”  since more than likely each of us has gone through that experience more than a few times in our lives.  Personally, more examples come to mind than I care to remember.  But one that I will share was from about 8 or 9 years ago.  At that time, I had written the Archbishop of Newark, Archbishop Myers about something that was not too urgent or memorable (obviously, since I can’t even remember what it was about), and in his response what was memorable was his closing comment that completely unnerved me, saying “I’d like to get together with you in the coming months to discuss something completely unrelated.”  I’m sure he didn’t intend this to be the case, but that was the worst thing I could have read because, as an over-thinker, my mind raced in more directions than I would have imagined possible.  Nothing bad (I pretty quickly realized if it was bad, there wouldn’t be this somewhat casual tone) but unsettling.  Long story short – within a few months we finally met where he shared what was on his mind.  He was thinking of naming me Director of Priestly Vocations for the Archdiocese of Newark.

Thanks so much for stopping by to read this, my homily for 13TH SUNDAY IN ORDINARY TIME- July 4, 2021, for sharing it on your social media posts and your feedback and comments! For the audio version you can get them at SOUNDCLOUD click HERE or from ITUNES as a podcast HERE. Thanks again… I hope you and yours experience all of God’s blessings today and always! In Christ – Father Jim

In some ways, it was really a vote of confidence and support.  That is such an incredibly important assignment to help promote prayer and discernment for Priestly vocations; to meet with men who are open and thinking that possibly Jesus is calling them into this friendship and ministry with Him, and to help guide those who become more sure of that call through what can be an overwhelming and most definitely lengthy process.  Not that it’s more important than any other priest’s assignment, because it’s not – the most important thing for any priest is to be faithful to our promises at ordination; to be in persona Christi, to stand in the person of Christ as we offer His Sacraments to His people. But this specialized and unique nature of the assignment definitely makes it stand out in a way throughout the whole Archdiocese, and even beyond as you end up having to interact with priests and bishops from around the world.  All of that was intimidating enough, along with the fact that for years the Archdiocese of Newark was celebrated for having “the most ordinations in the nation.”  I could sense the stress, the pressure from the first meeting and the first discussions I had with the Archbishop, who was very kind and supportive and assured me that all of those things really needed to be squashed and just focus on the priesthood of Jesus Christ – what that means, what that means personally and to let the Lord guide me in this work, to develop a vision in taking on this role.

One of the “promises” at ordination we make as priests is “obedience to our (Arch)bishop” – so after I think 3 meetings and countless letters back and forth in this continued dialogue and discernment, I accepted.   And honestly, every fear I had going into this role was realized pretty quickly.  The administrative aspects were great, the phone was not ringing off the hook of men interested, the pressure (indirect or direct) with each person I met asking “so how many guys do you have coming in next year” I personalized way too much.  As I followed what I believed was the vision that the Lord had put into my heart for the direction of our office, definitely caused tension and very quickly the numbers of men we were considering for accepting into seminary dropped significantly.  As much as the Archbishop and many others in the Archdiocese who were involved in all of this supported me, encouraged me, and assured me – what I knew was true in my heart that it wasn’t quote/unquote “my fault that the numbers were falling” – that ultimately it’s Jesus who calls men to the priesthood and nurturing those vocations isn’t the sole responsibility of the Vocation Director – but the entire people of God from parish priests to families praying for vocations, and that perhaps one of their sons would be called to be a priest – one of their daughters would be called to be a religious – while I knew all of that to be true, the reality was I couldn’t shake that feeling of being a “failure.”  At the end of one year, I asked to be relieved of the position, which the Archbishop had agreed to – while encouraging me that he did not see me as a failure and hoped I would reconsider, which I did, for another year, and with not being able to ever shake that feeling a year later, I asked again, and this time the Archbishop allowed it without much discussion.

It stinks “feeling like a failure” – doesn’t it?  It’s one thing when we make a bad choice, bad decision didn’t do what is required or put in the effort and find ourselves struggling – but so often we find that “feeling like a failure” somewhat out of our control:  A newlywed couple who finds it difficult to become pregnant; The kid playing baseball or softball who doesn’t hit that game-winning run; The college student who did well academically all their lives who struggles that first semester; The parents or grandparents who brought their kids to Mass, to CCD for years and sees those kids not practicing their faith anymore… In all of those instances, people all did “the right thing”; sincerely tried -and found themselves feeling like a failure.

Initially reading this gospel, you can imagine Jesus being able to relate to that feeling.  Here in the Gospel of Mark up to this point, he has already accomplished so much – healings of illnesses and debilitating conditions, casting out demons, calming of the sea, bringing a girl back to life from the dead.  Word had spread, multitudes of people were coming out to hear and see Jesus from great distances.  It makes sense that Jesus has this desire to share his ministry with those he knew the longest, those he grew up with, those he loved and cared for.  To share this good news, to let them experience the fulfillment of the faith that they had carried, the hopes and dreams they had imagined to be realized.  And instead, we see outright rejection to all that Jesus was saying, and a dismissiveness not just to Him personally, but to His earthly family as they kind of mock him as “the carpenter, the son of Mary…” We read Jesus was “amazed at their lack of faith” – so we know this had to have hurt and disturbed Him.

But whether he experienced feelings of failure, we don’t read or hear any of that captured here.  We don’t read about Him giving into self-doubt, second-guessing.  In fact, the next line in scripture after this passage has Him simply moving forward teaching in other villages, and then sending his apostles to start performing the same miraculous acts He had just accomplished. 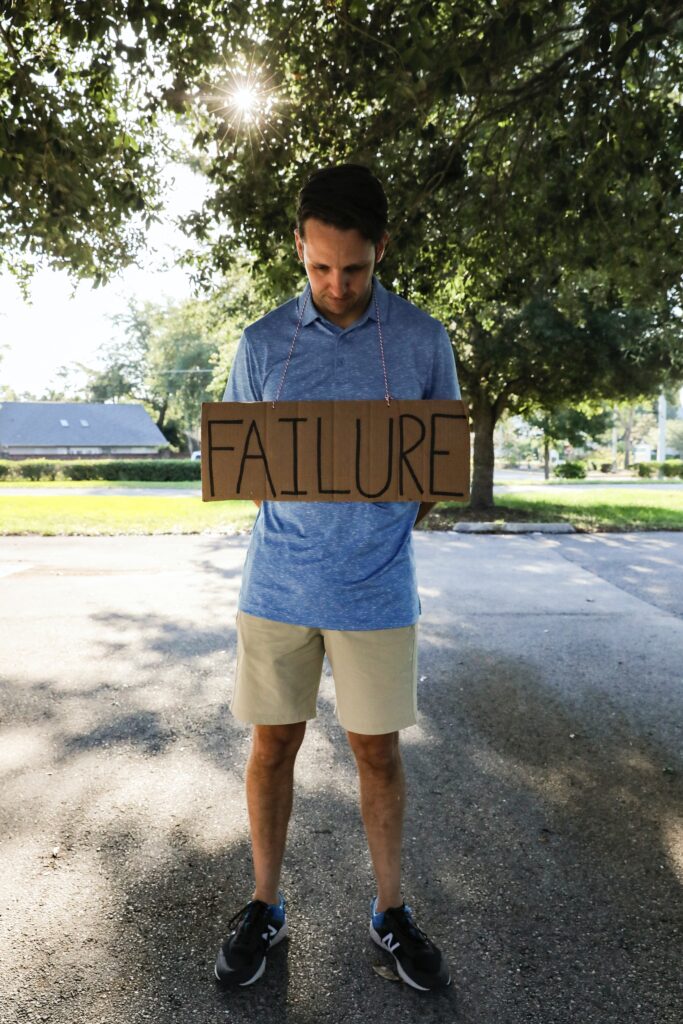 Which is what each of us needs to focus on as people of faith.  When we are doing the “right thing” and don’t experience the “right results” – when we are trying to be honest and virtuous and see others who we know aren’t getting ahead – when we are being faithful, we’re even at Sunday Mass on the 4th of July and feel like our prayers aren’t being answered – because we don’t see the results that we wanted to see – it’s easy to feel like a “failure” and for disappointment, discouragement even despairs to take root.  For us to give into doubt or fear or even indifference.

But rather than wallowing and giving into those feelings, Jesus is inviting us into deeper faith and trust in Him.  Because each of those experiences of “feeling like a failure” only becomes a failure if we give into that feeling. Let me say that again – it’s okay and normal to feel like a failure – but we only become a failure if we give into that feeling.  I’ve had newlywed couples who had difficulty getting pregnant who after they stopped stressing about it, eventually did – I’ve had others who felt called to adoption, and that call that vocation to parenthood brought out even deeper love than they ever knew was possible as they went through that whole process- and have had others where this struggle ended up causing marital problems.  I’ve seen college students drop out after a semester because they were so spooked by this experience of struggling with their grades – and others who dug deep and saw it as a new challenge or that they were majoring in something they didn’t really want to study…  I’ve seen parents and grandparents who have given into despair and fallen into indifference in the practice of their faith like their kids because they were so discouraged that none of them went to Mass anymore – as well as grandkids coming to our campus ministry asking to be baptized as college students having not been raised in the faith saying how “I was always inspired by Grandma and Grandpa’s faith and their example.” Even personally, I was able to not let my feelings of failure weigh down on me but came to see how the Lord utilized my time to accomplish important things that needed to be instituted for the long term.

Who knows … while this day in Nazareth isn’t remembered for life-changing conversions, while Jesus may not have been received well that particular day by his hometown, we don’t know if those were seeds being planted that eventually took root. What we do know is that Jesus didn’t let this experience stop Him from responding to what God the Father had sent Him to accomplish- of preaching and healing, sacrificing and blessing, offering forgiveness and new life to the world.   It’s okay to feel like a failure – but it only becomes a failure if we give into that feeling.

St. Mother Teresa of Calcutta once said “God doesn’t ask that we succeed in everything, but that we are faithful. However beautiful our work may be, let us not become attached to it. Always remain prepared to give it up, without losing your peace.”  May you and I persevere in remaining faithful, and in doing so, confidently stay in peace.

Quick commercial  – we at Red Hawk Catholic have just launched our first Appeal since December 2019.  To read more, please go to:  https://homilyonthespot.com/2021/06/27/god-is-good-summer-2021-appeal/  And to donate, please go to REDHAWKCATHOLIC.com or checks can be  made out to NEWMAN CATHOLIC and sent to 894 Valley Road, Montclair, NJ 07043.  Thanks so much for your consideration!  In Christ – Father Jim