Around 1949, when the Communist party came to power in China, one of the first ways they began their campaign of fear and oppression on the people was with an assault on the Catholic Christians.  On this one particular day, without warning, soldiers arrived at a local Catholic School where they announced to the shocked children (and adults) that drastic changes were being implemented immediately.   They ripped crucifix’s off the wall, removed holy pictures and statues, and at gunpoint ordered the children to dump all of these religious articles in the toilets.  The children tried to resist, but the intimidation forced them all to reluctantly give in.  All except this one 13-year-old girl who sat in the back of her classroom, hands folded, lips tightly shut, unmoving.  A guard shouted and cursed at her, shot off his gun shattering glass causing the children to scream as he demanded that this “renegade child” take one of the statues and desecrate it as they had ordered.  She tried to remain silent and still, as a tear ran down her cheek.  At that, the guard demanded that some of the other soldiers get the young girl’s father and the rest of the townspeople and bring them all into the Church – where they would address everyone, including the Pastor.

Thanks so much for stopping by to read this, my homily for CORPUS CHRISTI – THE MOST HOLY BODY AND BLOOD OF JESUS CHRIST- June 6, 2021, for sharing it on your social media posts and your feedback and comments! For the audio version you can get them at SOUNDCLOUD click HERE or from ITUNES as a podcast HERE. Thanks again… I hope you and yours experience all of God’s blessings today and always! In Christ – Father Jim

As the church filled with people, the little girl’s father was ushered in with hands bound behind his back and placed to the right of the communion rail. The girl was dragged to the communion rail as well… at which point one of the communist officials began to shout and denigrate the people and mock their belief in the Real Presence of Jesus in the Eucharist as he pointed at the tabernacle.  He called them stupid, weak-minded people who were manipulated into believing a lie that God exists and that He was present in the Eucharistic host.  To prove his point, he ordered the gang of soldiers to stamp on the Eucharistic hosts with their boots to show nothing would happen.  His argument: if God exists, and is all-powerful,  and is present in those Eucharistic hosts, then obviously He would not allow that blasphemy to Himself to take place… The soldiers rushed to the tabernacle, forced it opened with their revolvers as the crowd watched in horror.  The official seized the ciborium, took the lid off, and scattered the Hosts on the sanctuary floor.  At that, he ordered the soldiers to go and step on the Hosts, which they did without hesitation.

“Do you still believe in those fairytales your priest told you?” He yelled as he turned to the young girl’s father.  As the father said yes he was hauled away.  Another officer arrived on the scene who ordered the crowd to be dismissed, the Church to be shuttered with the people forbidden from entering and the priest to be confined in the coal bin which was right below the body of the Church – but was situated in a way that the priest could view his now-shuttered, empty and silent Church that had been defiled – with the consecrated hosts that had been desecrated still lying there on the floor.

Hours and days passed and the priest lost sense of time – never sure what horrors were next when one morning he heard the door of the Church open.  As he peered into the Church, he saw the little girl who days earlier had been so defiant to the aggressive soldiers returning by herself.  She went to the Sanctuary where the Blessed Sacrament had remained poured out on the floor, knelt down, made the sign of the Cross, received one of the hosts, prayed in silence, and quietly left.  This happened again the next day, and then the next…  The brave girl made this daily pilgrimage not realizing how she not only was spiritually nourishing herself but providing comfort and strength to the incarcerated priest…Seeing her bold faith in Jesus and her defiance against this atheistic regime as she risked being caught by the authorities.

A month later, there was a single host remaining, and there she was once again in her daily ritual.  As she leaned down to receive Jesus’ body blood soul and divinity one last time, she made a slight noise.  A guard heard her, and the Church doors burst open.  Moments later, the priest heard a gunshot and the body of the young girl falling to the floor. 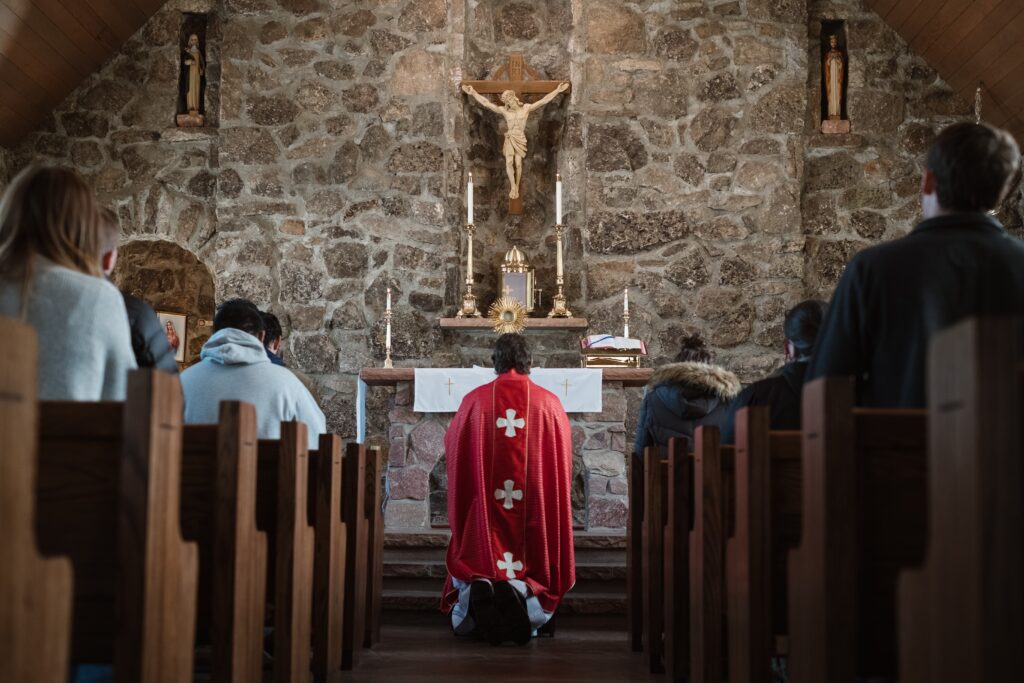 What this young martyr did would’ve made no sense at all if the Eucharist was just a piece of bread or a symbol.  She understood the Real presence of Jesus in the Eucharist – the fact that at Mass, as the priest dares to utter Jesus’ words of consecration that the Holy Spirit is present and the bread and wine are changed into Christ’s Body and Blood.  It was this truth that drove her to protect Jesus in the Eucharist from further desecration.

Every year, as the Easter Season ends on Pentecost, we have these two extra feasts on the Sundays that follow them.  Last Sunday we celebrated Trinity Sunday and now today we celebrate Corpus Christi – The Most Holy Body and Blood of Jesus.  In one sense, people might argue why do we need a separate feast for something that we receive at every Mass?  Jesus’ Body, Blood, Soul and Divinity is made real and present every single day (oftentimes multiple times each day) on this altar.  He remains ever-present in this tabernacle every moment of every day.  In truth, there’s no greater act that can celebrate this gift of the Eucharist in that it is given, received and then in turn, we give ourselves to Christ caught up in this mystery of our faith.

This feast adds nothing to Jesus’ greatness… He doesn’t need this feast, we do.  The Church gives us Corpus Christi to help emphasize the tremendous gift that sadly can lose its importance.  Lose its importance not in the gift itself, but in the hearts and minds of believers…whether that’s because we’re so distracted (or allowed ourselves to be so distracted) – or we’ve not been better educated about this Sacrament, or we’ve somehow become too casual, treating heavenly gift as ordinary, seeing Mass as simply a routine and accepted lack of reverence,  and indifference to obscure things…

Whatever the reason that the Eucharist has in too many of our lives been diminished, Corpus Christi is meant to reawaken what is meant to be central to our lives as Catholic Christians.  To pause, to reflect, to get lost in the mystery and awe of the preciousness of what happens here:   The goodness of our God who comes to us…   And just think about how he comes.  The Gospel we just heard recounts Jesus’ Last Supper.  The night before what He knows will be filled with abject failure, torture, death.  Interesting isn’t it that this is not something Jesus initiates after Easter when He rises from the dead when He is triumphant.  It is before that eternal victory.  In that Jesus wants to encounter us in a deeply personal way as if Jesus is saying to each and every one of us – Have you experienced humiliation?  Do you feel alone or abandoned?  Are you in pain or suffering? Does it seem like the world is closing in on you – that evil is triumphing, that faith, hope, and love are fleeting – that death has the final word?  See in this Host – My Most Holy Body and Blood, Soul and Divinity.

See in the Host, the only one who conquered all that and experienced new, Resurrected life…

See that present in that Host…

See and receive that gift – be nourished and transformed by that gift… and let yourself become a living tabernacle.  Go forth from this place and share this good news in our streets, our neighborhoods, our families, our schools, and workplaces the joy that comes from recognizing God truly remains with us…

Can we hear His voice speaking these truths to us?  Do we recognize the importance of receiving Him and how that’s not just about “showing up” and being present – but knowing the need for all of us to go to confession so that we’re in a state of grace to properly welcome Him in, as weak and imperfect as we are?  And then being willing to witness to the difference He makes in our lives to the world… To revere the sacredness of this Host we receive and remains in our tabernacle here?

The witness of that nameless young Chinese martyr was so powerful, that immediately after she was shot and killed, the soldier released the priest from his confinement telling him he was free to go… as he ran and knelt down at her lifeless body, the soldier who had just killed her said: “Sir, if in every town there was such a little girl, no soldier would ever fight for the Communists…”  Which was a strange but accurate observation for this cold-hearted murderer.   Archbishop Fulton Sheen, when he first heard this story, made a vow that for the rest of his life he would make a Holy Hour – he would spend an hour a day with Jesus in the Blessed Sacrament.  The effect of which animated his life in profound ways that please God, he will be beatified soon.

Can this girl’s witness help reawaken our spiritual senses to what we’re privileged to receive here?  Will this Corpus Christi be the day that we recognize anew the immense love of God who wants to be near, and close to us so much that He remains this accessible?  Do we meet Him in His vulnerability and dare to ask Him to meet us in ours – bringing to Him our illnesses, revealing the darkness we hide within – and ask Him to unleash His real presence in our lives to guide, comfort, heal and strengthen us.

Jesus is calling us to let Him do that for us.  A few years ago, a book of what was private revelations from Jesus to a priest, who remains anonymous, was published.  It has been a true blessing and a challenge in my own prayer life to read these words of our Lord speaking about His presence in the Eucharist.  One of those words Jesus said:

Looking at the Host, My true Body…

the world sees nothing:

no action, no usefulness, no message, no significance.

Looking at the same Host

with the eyes of faith,

what do you see?

Do you not see,

however faintly and obscurely,

what the Father and angelic hosts see:

the Lamb slain from before the foundation of the world;

the very work of redemption unfolding;

the glory of my Face filling the universe with the radiance of my divinity;

the one Face that all the world desires to see?”