A guy and a girl go out on a bunch of dates. Things seem to be going along well – similar interests, lots in common, they get to a place where it’s a given that one date ends with plans for another one… Then after one of these dates, the boyfriend or girlfriend reaches out to the other to confirm that date with a simple text “are we still on for tomorrow?” receiving no response. They try again “hey did my message go through?” nothing. They actually call and it goes right to voicemail.  The person goes from fearing that something might have happened to the other person that’s made them so unresponsive to fearing that they’ve been “ghosted.”

Thanks so much for stopping by to read this, my homily for THE ASCENSION OF THE LORD – May 16, 2021, for sharing it on your social media posts and your feedback and comments! For the audio version you can get them at SOUNDCLOUD click HERE or from ITUNES as a podcast HERE. Thanks again… I hope you and yours experience all of God’s blessings today and always! In Christ – Father Jim

While the phenomenon of someone abruptly ending communication without a goodbye, explanation, or an opportunity of giving “closure” isn’t new – it does seem to have become far too frequent an occurrence for people with The NY Times, The Washington Post doing lengthy pieces on this behavior. “Ghosting” isn’t simply limited to romantic relationships either. In The Guardian, (a British newspaper) they recounted a story of a woman who had a friend for 25 years – whose children were of similar ages which was another way that they had more in common and helped them bond who suddenly was “ghosted” by her friend after she had experienced a death in her family that this friend was unable to deal with.  It left her feeling humiliated and depressed.  Linked-in, the employment/professional networking website shares stories of it happening in hiring processes. A young man shared how a recruiter had reached out to him for a job in his company.  They quickly intensified the entire application process with a phone interview, contacting the references, having an in-person meeting, and even making a verbal offer on a Friday with promises that Monday by 2:00 PM they would email the written offer.  By 5:00 the candidate calls to see if it had gone out, was lost in cyberspace, etc. to receive no response. He follows up with another email and a phone call the day later and still receives no response. The reverse is true to… Employers having hired someone share how some never show up for their “first day” or after a few days – even weeks of work, one day simply not returning without even a word to explain their exit.

Having been on the receiving end of ghosting from someone who I had considered a friend after we had a falling out – I can only begin to imagine the frustration not to mention the emotional pain that this causes for people in those other situations.  The writer in the Washington Post very painfully shared how she had been dating someone that she had known for some time having been introduced by mutual friends. After dating exclusively, while she was battling the flu – which her boyfriend also had, he simply stopped communicating with her.  She went from fearing that his illness had developed into something worse to being convinced that this was his way of telling her they were through, causing her to ask herself “if that’s the case, why am I worrying about him.”  She vulnerably explained how she was crying so loud that she was sure her neighbors could hear her.  That lead her to observe: Our culture of busyness and flakiness, created and enabled by technology, allows us to avoid tough situations every day, and not just in our love lives. Email and texts fall through the cracks, sometimes accidentally, sometimes because we don’t know what to say or are afraid to tell the truth. Once it became easy to cancel plans or push them back 10 minutes with a quick message, it became just as easy to vanish from someone’s life. What are we really so afraid of?

Some psychologists point to avoidance – those who do this don’t want to deal with the discomfort of an emotional conversation.  Others think that if it has happened to you, if you’ve been “ghosted” that it can desensitize the person to forget how it felt, to forget how to empathize with the person on the receiving end, and to just act as cruelly as you were treated,

But one psychotherapist’s observation pointed to “ghosting” is not just rude or cruel behavior that is seemingly become more acceptable – and points to a bigger issue. She explained that people crave authenticity – but the more times that someone experiences something unsuccessful with that -whether it’s romantically, in friendship, or in a job situation – the more they feel discouraged… like a failure… vulnerable.  Those feelings coupled with a narrative that there’s a specific, particular perfect destiny – a soul mate, perfect friend, dream job and when they’ve determined this isn’t it, it instills fear that a person decides they need to bail, run, out of fear that the clock is ticking and there’s no time to lose in order to get things right.  Having counseled people who’ve experienced this behavior, that explanation seems to be a bit closer to the truth and why it seems to be happening more and more these days in a less religious/more secular world.

With these types of attitudes happening more often, today’s celebration of the Ascension of the Lord is even more important a moment in the life of Jesus Christ to us in our day and age.  Over 40 days ago, we commemorated how Jesus was unjustly arrested, tortured, and crucified.  Bad enough that it was in part, brought about through the traitorous acts of one of his own, Judas. Aside from a handful of people, including, The Blessed Virgin Mary the Mother of Jesus; Mary Magdalene and John – Jesus was in fact ghosted by everyone else… those who ate the abundance of bread and fish He miraculously produced; those who had experienced healing from his now crucified hands; the crowds who hung on his words as He taught; and most disappointing , His newly ordained priests, His beloved apostles who were his closest companions, to whom He movingly and beautifully had made the point they weren’t just followers, students, they weren’t slaves to a Divine Master, no, He had just called them His friends…. Consumed with fear they disappear. The entirety of who they were, their lives, their relationships, their destiny – all of that Hope had been in Him.  But now as the chaos of those hours of late Holy Thursday and Good Friday unfold, in the face of this obvious failure when all seemed lost, they in fact “ghosted” Jesus.

As we’ve journeyed for 6 full weeks in Easter, we’ve seen that as Jesus is raised from the dead, a pivotal event upending history forever – think about how the Apostles have reacted. Every time Jesus appears to them, revealing clearly He is not a ghost – literally or figuratively – He is indeed risen, flesh and blood in a glorified body no longer limited by time or space – the gospels constantly recount that those He appears to are still filled with fear, they need to be constantly reassured; they need Him to offer them His gifts of peace, His forgiveness. It seems like all through Easter there’s that hesitation on their part. Are they afraid to get their hopes up again?  Are they still doubting Him – or themselves? 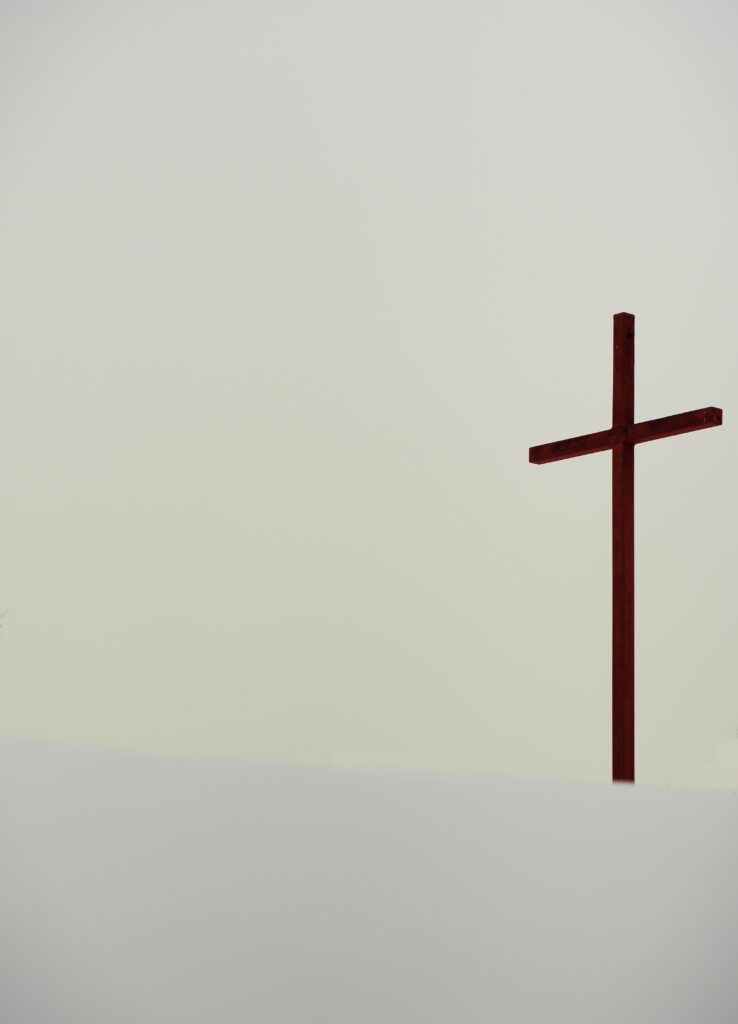 Which is what makes this commemoration of the Ascension of the Lord, of Jesus visibly leaving so notable. This time as He leaves, as He ascends into heaven, something amazing happens.  The recognition of Jesus’ promises being true begins to click for the Apostles:

+ Humanity does not have to settle for its broken, sinful norms – in Jesus we see humanity ascending to the Highest heavenly powers.

+As they witness His bodily leaving them, they have a new vision to recognize how His presence never leaves them most notably in the Sacraments, in their shared mission, in their community, in their service

+And that God never gives up on us… Jesus’ has not given up on them, even when they had given up on Him.  The failure that the apostles initially saw in Jesus’ death on the Cross – and even more in themselves which had left hem despondent, with the Ascension and the gift of the Holy Spirit at Pentecost, transforms them. Pope St. Leo so beautifully described this change as “faith does not fail, hope is not shaken, charity does not grow cold… It would remain unshaken by fetters and imprisonment, exile and hunger, fire and ravening beasts, and the most refined tortures ever devised by brutal persecutors… Throughout the world women no less than men, tender girls as well as boys, have given their life’s blood in the struggle for this faith. It is a faith that has driven out devils, healed the sick and raised the dead.”

Here in 2021 on this Feast of the Ascension, we have a growing number of people who have “ghosted” Jesus have abandoned any semblance of any interest in Him which is tragic enough.  But even more problematic is the countless numbers of followers who haven’t, but still aren’t demonstrating, witnessing, testifying in their life an example of that faith that doesn’t fail, a hope that isn’t shaken or a charity that does not grow cold. Jesus not only saves us from our sins, graces and blesses us with all that we need in this life to bring us to eternity with Him, but then entrusts that precious gift meant for all humanity to be transmitted to all humanity – by us. Go into the whole world and proclaim the gospel to every creature. People crave authenticity… Humanity longs to know it’s destiny and, foolishly since that day in the Garden of Eden, has constantly fallen for lies of the devil, gone after worldly ambitions and pursuits that have (and will always) inevitably end in failure, in lacking fulfillment. And each time that happens, ultimately there’s more fear, more vulnerability, more desperation as that quest goes off in more and more wild directions.

The Life, Death, and Resurrection of Jesus Christ is the only answer to those deepest of longings within each and every human heart. With Him we are satisfied. With Him, it is enough. We need never run from Him, because He will never “ghost” us…He – the most faithful of companions – will never leave us.