Last summer, in the craze and haze of so much unrest and protest – was a curious incident that probably got lost in the non-stop stream of news that was and is impossible to digest.  A statue from Hawaii in the United States Capitol building that had been there for over 50 years was at the center of controversy when it was described by a high-profile politician as a symbol of “what patriarchy and white supremacist culture look like.” Few ever knew of the statue let alone the story of the man, Father Damien, and why he was there (which would’ve been helpful and productive before attacking the  statue because of the color of his skin and his gender)

Thanks so much for stopping by to read this, my homily for the 4th Sunday of Easter – April 25, 2021, for sharing it on your social media posts and your feedback and comments! For the audio version you can get them at SOUNDCLOUD click HERE or from ITUNES as a podcast HERE. Thanks again… I hope you and yours experience all of God’s blessings today and always! In Christ – Father Jim

Father Damien was born in Belgium in 1840 to a very wealthy family when he heard the call of the Lord to the Priesthood and religious life with a missionary order called the Sacred Heart Congregation.  He was sent to Honolulu -which for a man who was preparing to be a newly ordained priest probably sounds like an idyllic first assignment.  (Just to underline a point, that means Father Damien was an immigrant who came to the Kingdom of Hawaii before it was an American state to serve others – just so we don’t miss or forget that point either) After serving the people of Kohala for almost 9 years, a pandemic broke out of something far more dangerous than COVID… of leprosy.  Large numbers of his parishioners having contracted that debilitating and oftentimes life-threatening disease,  were quarantined and sent to a “leper colony” separated from the rest of the community.  Father Damien wrote his superior and said that he had this undeniable feeling that he should join them and asked for permission to go to the colony.  Because of the highly infectious nature of the disease, the lack of any cure, and just so many unknowns for the Hawaiian government to know how to deal with leprosy, Fr Damien was given an ultimatum by his superiors – to either leave the colony or remain their permanently.

He chose that latter and during this time, he not only taught the Catholic faith to the people of Hawaii. Father Damien’s bishop wrote that: “Father Damien accomplished amazing feats while residing on Molokai.” He cared for the patients by dressing their ulcers and providing medical and emotional support.  He provided guidance to establish this quarantine into a community where he rallied the people and helped to build houses, schools, roads, hospitals, and churches. He could be found not just celebrating Mass and hearing confessions, but helping to build a reservoir, coffins, digging graves for the people who succumbed to this illness.

After eleven years caring for the physical, spiritual, and emotional needs of those in this leper colony, Father Damien ultimately contracted this highly contagious disease of leprosy as well.   But even with that, he would keep working for another 5 years despite the infection until he finally succumbed to the disease on April 15, 1889.

Every year on this Fourth Sunday of Easter we hear one of Jesus’ “The Good Shepherd” gospels. Being removed from farm life, not knowing much about sheep or shepherds, the full weight of the symbolism, the meaning, the significance of all that can fly over our heads. But for Jesus and his original listeners, it would’ve resonated quite profoundly.

Shepherds are by their nature protective of these simple, needy, lovable creatures, these sheep.  They become so protective that they end up sleeping in front of the gate of the pen to make sure they don’t wander off or, even more, to keep watch to make sure that some other vicious animal – like a wolf – preying on these weak animals, don’t come and attack them.  Should one of the sheep get lost, the Shepherd would know, and the sheep would be able to identify their shepherd by his voice, by his smell as they were being sought after by the Shepherd.

Sadly that dedication seems foreign to many in our day and age. We might be more accustomed to the image of the hired hand – who works for a period of time, does his “job” – but his mind, his heart is elsewhere.  Taking care of the sheep, feeding them, getting them to their pen, yep – fine, but 5:00 is quitting time – see ya sheep. And you can bet if there’s some wild, ravenous wolf on the scene, he’s out of there.  This is why Jesus makes the contrast – For the Shepherd, his life is tied to His sheep. Good times, bad times, they are his and he is theirs. The shepherd knows that in his heart, as do the sheep, who hear his voice and follow him.  So throughout these 7 short verses, Jesus keeps repeating I am the good shepherd. A good shepherd lays down his life for the sheep. 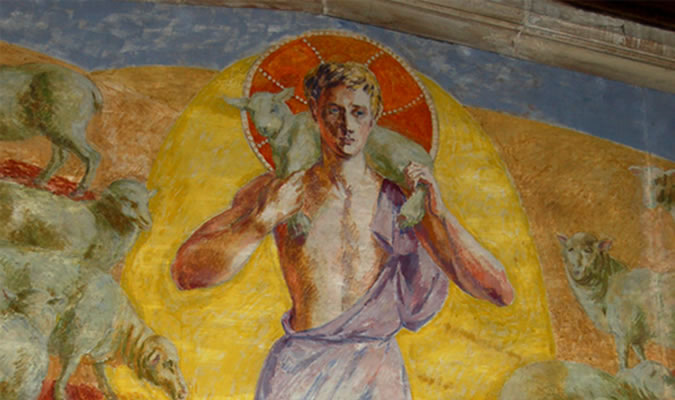 We know the depth of the meaning of those words to Christ as we look at the Cross. We see the standard he has set – that our Shepherd has laid down His life for us His sheep, fighting and defeating the “wolf” of sin and death.  While on some level those images – whether they be sheep and shepherd or the cross on Calvary are familiar and speak to us on some level, they still seem removed, still seem like a distant, foreign example for us to comprehend or even begin to emulate.

This is why Father Damien’s example was so revolutionary to the people of Hawaii that a few years before his death, one of the princesses of the Kingdom of Hawaii had him given the title of Knight Commander of the Royal Order of Kalākaua in 1881, for his “efforts in alleviating the distresses and mitigating the sorrows of the unfortunate.”  He remains a beloved figure to native Hawaiians because they not only admire his service but recognize that he loved the Hawaiian people – he learned their native language, their culture… he very much became one with the people.  When he was canonized in 2009, President Obama, who grew up in Hawaii said: “Fr. Damien has also earned a special place in the hearts of Hawaiians. I recall many stories from my youth about his tireless work there to care for those suffering from leprosy who had been cast out… Following in the steps of Jesus’ ministry to the lepers, Fr. Damien challenged the stigmatizing effects of a disease, giving voice to the voiceless and, ultimately, sacrificing his own life to bring dignity to so many.”

Which is what makes him a good example of a “Good Shepherd.”  Despite the warnings and even the “out” given to him by his superiors to leave for his own safety, we hear this heroic story of the lengths he went to take on the burdens and needs of people who to the outsider observing it would think are complete strangers  – truly laying down his own wants, his own needs, his life–  seems to be the personification of being a “good shepherd.”

Fr Damien didn’t just do good and admirable things but brought to birth faith, hope, and love in Jesus Christ. That wasn’t something that could’ve been accomplished simply with a few generous donations or the perfunctory actions that any number of hired hands could’ve offered.  No, like Jesus, our Good Shepherd, Fr Damien seemed to know there was a call to lay down his life for another.

For you and I, we know that we’re being called and challenged at this very moment to do something for someone…  Who is it that we’re being sent to go out and seek? Who is it that is lost, scattered, forgotten that we need to bring back? Who are the people filled with fear and doubts who need to have rekindled within themselves their great value, gifts, and talents?   How are we being asked to bring the peace and justice of God into our relationships and communities? Jesus is giving us this true model of leadership – of humble, selflessness – of being Good Shepherds ourselves. Will we answer that call?