A man who was sent to begin a new leadership assignment for the corporation he was working for was gathering with his new team for an introductory meeting.  The office manager thought a good way for people to introduce one another was by sharing their name, how long they worked for the company and what was their biggest fear.  So they went around the room:  Somewhat unsurprisingly – one person said “spiders.”  Another went for a laugh with “unemployment.”  Someone answered “death” which brought about a couple nervous chuckles.  Then another person followed up with “not belonging.”  Effectively taking what was meant to be a light-hearted ice breaker into a very deep exercise.

Thanks so much for stopping by to read this, my homily for DIVINE MERCY SUNDAY (2nd Sunday of Easter) – April 11, 2021, for sharing it on your social media posts and your feedback and comments! For the audio version you can get them at SOUNDCLOUD click HERE or from ITUNES as a podcast HERE. Thanks again… I hope you and yours experience all of God’s blessings today and always! In Christ – Father Jim

The author, Devin Schadt who shared that anecdote in his book entitled InterFEARance followed up with a similar experience of his own.  He was with a group of 15 other guys who were all part of a local writers group, during one of their gatherings, a member pointedly asked Devin “What are you afraid of?”  He writes that three answers hit him at the same time – “There is no way I’m giving you a real answer” “How long do you have” and “I have a fear of questions like this…”

It doesn’t have to be the middle of a pandemic – the reality is that fear is one of those things that we hate to admit to struggling with – yet is one of the most universal of human experiences to every age group, in every time of history.  Whether it’s the little kid scared of the dark; the teenager afraid of not having friends; a college student worrying about their debt or finding a job; the couple getting married anxious about what the future holds, or older adults angsting about all of those fears of everyone else as they think about their families as well as worries of their own concerns over illness or loneliness… fear is something that reoccurs throughout our lives.  We might conquer or grow out of having a particular fear but we never are immune to experiencing fear.

This is why this Gospel is so relatable.  When this passage comes up, every year on the 2nd Sunday of Easter, we often get focused simply on Thomas who has unfairly been labeled “doubting,” (I mean seriously, we didn’t do that to Peter calling him “denying Peter” for his failure, but I’ll save that rant for another day) but there’s a lot more here that’s bigger than just St. Thomas.

In the verses before this, we had Mary Magdalene has already discovered the empty tomb, Peter and John have been there themselves, and John tells us that “he saw and believed”… Jesus had appeared to Mary Magdalene and told her to tell “my brothers ‘I am going to my Father and your Father, to my God and your God.”  Those all took place on Easter Sunday.

This Gospel brings us to Easter Sunday Evening, and what has happened?  You would think that news would have them emboldened or excited, but we read “The doors were locked… for fear.”  Fear of the Jewish authorities coming to arrest them… Fear that they would be next to end up on a cross… Those were certainly part of what was causing that fear.  But perhaps there was something else.  Fear that this good news wasn’t true?  Fear of Jesus?  Knowing how much they had failed Him in the hour of trial and passion.  Knowing how their love for their own physical lives somehow eclipsed what should be primary for every Christian: Love for God, and then Love for one’s own soul and the souls of others.  Fear had already disordered that hierarchy on Good Friday to simply worrying about themselves.  So now that Jesus is Risen, the ultimate vindication and validation of all they had ever heard from Jesus’ lips, witnessed with their eyes and knew deep within their hearts to be true – perhaps they fear that they’ve lost their chance.  It was bad enough when they lost Him physically on Good Friday.  Now that the shadow of the doubt about Jesus being who He said He was, perhaps they fear they’ve lost that too. 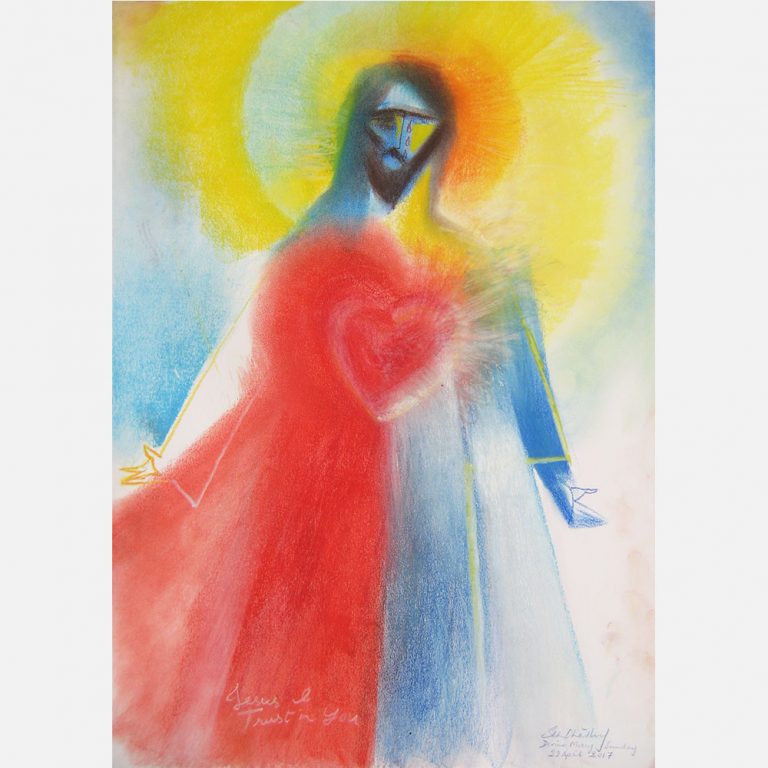 Yet what happens?  Jesus enters right into that space.  Locked doors, nor scared, broken, flawed hearts are not an obstacle for Him.  He enters in not with a list of issues to discuss – the who – what- where- why and how they failed…  He doesn’t share words of condemnation or disappointment.  Instead, He pours out Peace…  Forgiveness.  The glory of Easter isn’t just Jesus being risen from the dead, as historically universe changing as that was… but the glory of Easter is how He restores them and us.

This is why Thomas is an important part of the Gospel as well.  Not because he experienced the same doubt that the rest of them did (but had the courage to actually name it) – but because he shows us how doubt is the devil’s tool to sow mistrust.  Satan seeing how these feelings and emotions have overwhelmed them in these days of darkness of Good Friday and Holy Saturday now makes it hard for Thomas to trust these witnesses and their testimonies.  The only remedy? – He needs to encounter Jesus Himself, just as the others had that first Easter Sunday Night, in order to be healed of his doubt.

Easter is bringing them back to basics – there is no other way forward for this or any other fear that they will encounter other than making Jesus the priority for their lives.

Jesus has to be the priority for our lives too.  This isn’t just about those in the upper Room that first Easter evening.  Jesus wants to do the same for us who follow him thousands of years later, but with the same resurrection power, authority and presence He had that first evening.  To enter into the locked rooms we find ourselves self-imposed in and to remove our doubts, to cast out our fears.   The Apostles as his newly ordained priests were sent, and the priests of today are as well to continue that very mission – to bring Jesus to our world, especially in the Sacraments. Jesus tells us that in the gift of the Eucharist, we haven’t just been gifted with His Body and Blood – as the perfect sacrifice to the Father for the sins of all humanity – as the nourishment for our souls as we receive Him… But even more beautiful that Jesus desires divine friendship with us.  The Eucharist is the eternal pledge of His desire to remain close to all who want to see Him who need Him.    And in the gift of the Sacrament of Reconciliation, when we go to confession, we too experience Jesus’ presence in an intimately and personal way, offering us His forgiveness and allowing us to experience His peace.

That’s why this Gospel is perfect on this Divine Mercy Sunday.   This devotion grows out of the private revelations of Saint Faustina who died in 1938 had with Jesus who wanted her to share with the world who were suffering all kinds of horrors and tragedies of epic proportions that instilled fear and doubt that evil was on the march – to all that, Jesus simply but profoundly used this simple servant of God to remind the world:   God loves us.  That His mercy is greater than any sin that we have committed.  And if we go to Him, especially in His Sacraments of Reconciliation and Eucharist, we can receive that mercy ourselves.  We can begin to let go of the fear and doubts that creep in that tell us lies about ourselves, and about God.   Jesus went to Hell and back on the cross for us to never suffer from that fear and doubt – yet, the evil one continues to find things that undermine that for His people today.

Let us take comfort as we hear Jesus’ words spoken to St. Faustina who reminds us there is nothing to fear as he spoke to her and to us:  My child, know that the greatest obstacles to holiness are discouragement and an exaggerated anxiety. These will deprive you of the ability to practice virtue. All temptations united together ought not disturb your interior peace, not even momentarily. Sensitiveness and discouragement are the fruits of self-love. Have confidence, My child. Do not lose heart in coming for pardon, for I am always ready to forgive you. As often as you beg for it, you glorify My mercy.