When is a fight worth having?  Nations debate that on the global stage. Children on playgrounds do, too. In a day and age where we see deeply entrenched political divisions and a social-media-age that seems like the Wild West – the notion of “cancel culture” seems to encourage fights on a daily (if not hourly) basis. As a result, people or companies receiving backlash for doing something offensive (or being interpreted or manipulated that way) has affected almost every aspect of American public life.   Stories abound of politicians, celebrities, CEO’s, athletes – down to somewhat anonymous people who happen to join in on a fight – finding themselves going viral and then being affected by it in deeply personal ways. The result is that you have some who find themselves constantly outraged and seemingly looking for a fight on a regular basis.   While others are numbed and exhausted by it all, to the point of being apathetic or indifferent to anything. Which brings us full circle to the question – when is a fight worth having?

Thanks so much for stopping by to read this, my homily for the 3rd SUNDAY IN LENT – March 7, 2021, for sharing it on your social media posts and your feedback and comments! For the audio version you can get them at SOUNDCLOUD click HERE or from ITUNES as a podcast HERE. Thanks again… I hope you and yours experience all of God’s blessings today and always! In Christ – Father Jim

Bishop Clemens August who lived in Munich Germany during the rise of the Nazi regime under Adolf Hitler has an answer that remains courageous and inspirational decades later. He would speak openly and boldly against Nazism, and their racist, totalitarian ideologies. He was even more direct writing to Hitler himself. When Hitler didn’t write back, he began preaching on these things.  First over the fact that the government was ordering the removal of crucifixes from their schools.  He was so impassioned that it brought about massive protests which actually resulted in the Nazis blinking and not following through on that proposed mandate. Following that, Bishop Clemens started preaching against an even worse atrocity that was beginning to gain momentum – the Nazis euthanasia program, which was intended to take individuals with disabilities into custody and put them to death.  People at Mass would take notes of the Bishop’s sermons, and the anti-Nazi resistance smuggled them abroad. They were later broadcast to Germany on radio by the German service of the BBC.  Hitler hated the Bishop so much that he wanted him hanged, but his propaganda minister Joseph Goebbels warned that this could make him a martyr and cause more protests among the local Catholic population. So he convinced  Hitler to “settle the score” with this Bishop after the war. Thankfully that never happened, which is somewhat miraculous considering the millions of people who died at the hands of that evil tyrant and his evil regime.

It’s important to have reminders like this . . .  when we as a nation seem divided over, say something like whether Dr. Seuss was racist or not, and seeing people getting impassioned on both sides of that issue, to remember something a bit more serious.   To learn the difference between a distraction, a diversion from things that are really important.  Things worthy of our attention and passion. When is a fight worth having?

For the most part, people have an image of Jesus as kind, gentle, merciful. Those are all true and make sense – one of the titles that is attached to Jesus is Prince of Peace. Which is what makes this Gospel scene something that seems “out of character.”  Here Jesus is making whips of cords, driving money changers out of the temple, scattering animals, knocking over tables, spilling money. So you could say Jesus is a little bit fired up.   This is the same Jesus who appears so passive throughout the Passion narratives, his unjust trial . . . who as he hung dying will speak words of forgiveness to the very ones who tortured him, drove the nails into his hands and feet that caused hours of misery and ultimately his death.

It’s here in the temple square before Passover – with a scene that was not uncommon – to have money changers and animals at the ready so that visiting pilgrims could make the proper offerings to the Lord – that Jesus becomes enraged. What was it that angered Jesus so much? It’s more than just the greed of the money changers who are taking advantage of people’s devotion and need, for their own profit. It’s more than just the hypocrisy of the temple authorities turning a blind eye to this (and profiting from it, as well).

What infuriates Jesus, what makes him decide that this is indeed a fight worth having – is how this has defiled this intimate place of God the Father.

For the Jews – the temple had become the most sacred of places of encounter for them and the Almighty . . . It was a place of pilgrimage . . . It was a place where their identity as the Chosen People, as people of the Covenant was renewed.  We caught a glimpse of the importance of the Covenant in that first reading – with the selection from the book of Exodus.  With that reading of the Ten Commandments we’re fast forwarding to the end of the story, where we are hearing the culmination of the Israelites truly becoming God’s people. But, God the Father begins by reminding them of how He fought for them. God had saved them from slavery, led them out of Egypt first with the plagues, then the parting of the Red Sea . . . feeding them with miraculous food and providing water in the barren wilderness all as ways of saying how precious, how special they were to Him. He had revealed Himself to them.  He fought for them. And He had instructed them to build this temple which would be the holiest place on earth to the Jews – that had housed the Ark of the Covenant which contained the Ten Commandments in them.  Following the Ten Commandments, going to this sacred place, making their offerings were the people’s way of expressing their gratitude, their faithfulness, their love in return.

So in the Gospel, we recount this day when Jesus arrives on the scene and doesn’t see any semblance of that — the greed, the hypocrisy – perhaps even indifference and apathy from the people who were victims of such abuse. That is what enrages Him.  Not only were they defiling this sacred place that God the Father had intended as a place for Him to dwell, but it distorted the entire pilgrimage for the people… it defiled the people themselves 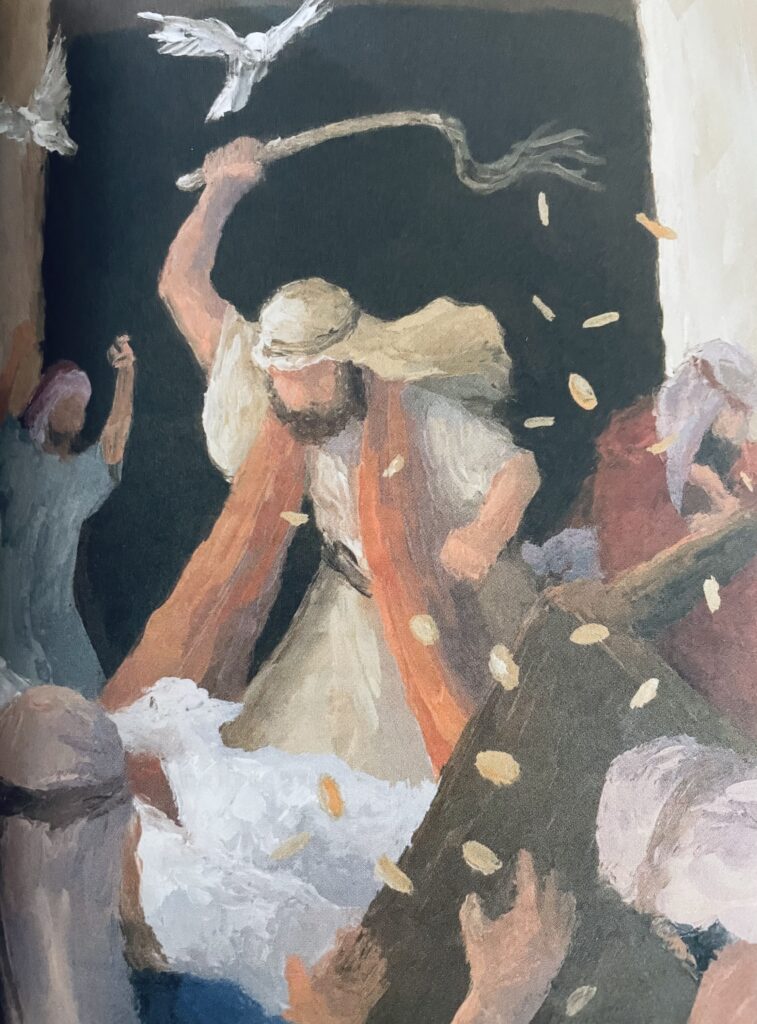 On the surface, Jesus is fighting to purify this physical temple . . . but it’s more of a foreshadowing of where the fight is going… He is fighting to purify the temple where God intends to dwell and encounter humanity.   In YOU – As St. Paul will say a little bit later in his letter to the Corinthians (that we heard an excerpt from today) – Do you not know that you are God’s temple and that God’s Spirit dwells in you? Just sit with that for a second – Jesus looks at each and everyone of you as God’s temple.   As He looks at us like that, think back to the observation of the disciples in the Gospel : Zeal for your house will consume me.

Jesus finds you – your soul – a fight worth having.  A fight that will indeed consume Him on the cross on Good Friday in an act of sacrifice that happened once for all eternity . . . But comes to us on this altar as His body and blood is made real and present.  But in order for Him to enter into our sanctuaries – He is looking for us to take up the fight to drive out “the moneychangers,” to knock over tables and to cast out any and everything that defiles what is meant to be a sacred place within.  This third week of Lent, we’re reminded once again of the importance and need for us to look within. To recognize the ongoing spiritual warfare that is taking place. The battle where we are constantly struggling between where we go from being tempted by satan and where we listen to Him – and His call to holiness, His call to follow Him.  His call to arms is spiritual battle – particularly with the three pillars of Lent where we are called to Pray, to Fast, to Give… And to enlist His help, by our doing a thorough examination of consciences and making a good and complete confession – seeing the Sacrament of Reconciliation as one of the greatest weapons we have readily available that so few utilize.

Jesus loves us. He’s willing to fight for us, to die for us – the question is do we see confronting and repenting of our sins – clearing out all that diminishes and defiles us – as a fight worth having?