How quickly, how succinctly a person can convey a message has been a goal long before Twitter ever existed with its 280 character-texts on their social media platform.  In fact, it was William Shakespeare, of all people, who coined the phrase “Tis better to be brief than tedious.”  Wished he took his own advice when I had to read his plays in High School English class – as I’m sure there are some who think the same thing when I get up to preach, but I digress…  But there’s truth to that saying.    Keeping things simple – cutting to the point is essential in how things are marketed.  In fact, think about how many ways people respond or act to just three little words.  Growing up the youngest of three boys – who often after we got tired of fighting with each other liked to find ways to torture my poor mother – my father was the master of communicating to us with three little words.  Three little words commanding our attention: CUT IT OUT…. GET OVER HERE… SIT DOWN NOW… SHUT YOUR MOUTH!   My father was a large man, and being pushed to the brink by the three of us and with just the right amount of Jersey Italian in him there usually wasn’t much need for further instructions or clarifications when he would utter those three little words.

Thanks so much for stopping by to read this, my homily for the 2nd SUNDAY IN LENT – February 28, 2021, for sharing it on your social media posts and your feedback and comments! For the audio version you can get them at SOUNDCLOUD click HERE or from ITUNES as a podcast HERE. Thanks again… I hope you and yours experience all of God’s blessings today and always! In Christ – Father Jim

But the more I thought about it, the reality of three little words catching people’s attention doesn’t end in childhood.  This past year during the viral pandemic think of how many things were communicated in similarly small word combinations.  we were told to FOLLOW THE SCIENCE – FLATTEN THE CURVE – WEAR A MASK – SIX FEET APART.  You don’t need any further explanation on any of those things – you know what is meant, what is expected just with those short 3 worded messages.

Politically this past year we saw two presidential campaigns that captured their extremely different vantage points with three little words: KEEP AMERICA GREAT or BUILD BACK BETTER.  Three little words definitely can evoke a lot of thoughts, emotions, and reactions for people.

For Catholics we often find a way to over complicate Lent or get lost and distracted by some thoughts or questions for the season like – how is it 40 days of Lent, when if you actually count the days from Ash Wednesday to Easter it’s more than 40 …. or with the not eating meat on Fridays does that include alligators…. or can I have the thing that I’m fasting from, that I gave up for Lent on Sundays?  There’s nothing wrong with those questions –  especially if we want to know and appreciate some of the intricacies of this season.  But we can’t or shouldn’t lose focus on what the real point of the season of Lent is all about.

Lent is meant to make us acutely aware of the spiritual battle between two extremely different perspectives that can be summed in three words each.  They come from the Sunday Gospels.  From last Sunday the three words – TEMPTED BY SATAN – and from this dramatic experience of the Transfiguration the three words of urgency that echo through the centuries – LISTEN TO HIM.

Lent comes down to those two sets of three words.

First is the reality that all humanity – including Jesus Himself – at some point, in some way or ways is TEMPTED BY SATAN.   What we have to admit, if we didn’t already know – this is not “a one and done thing…”  It’s not like once you’ve faced him down, once you’ve rejected a temptation, once you’ve successfully turned away and repented of your sins that you’re good to go and it’s smooth sailing.  Satan continues to bombard us with suggestions, manipulations, half-baked truths that lure us into being people we’re not intended to be, not created to be.

You see that in this Gospel passage.  Jesus is transfigured before Peter, James, and John.  The sights, the sounds are amazing! So what’s wrong with Peter’s suggestion?  It was good to be there – it was a moment of ecstatic happiness and peace.  Peter is TEMPTED BY SATAN not to want to go back down that mountain where he knows life is hard.  Peter has already heard Jesus tell them something about a cross – more than something – that Jesus will suffer and die.  That’s scared him.  So Peter’s tempted by Satan telling him – hey look there’s another way!  Just stay here instead.  Peter’s tempted by Satan to enjoy this gift he’s experiencing himself rather than taking in the reality of the giver of the gift who is removing the shadow of a doubt who Jesus was – God’s only begotten, beloved Son… whom the Father is well pleased with.  Very clearly and directly God the Father tells them what to do – LISTEN TO HIM.  Listen to Him who has – who is the only way for salvation to truly, definitively to be won… Listen to Him tell you that on the Cross – Satan himself will suffer a defeat that lasts for all eternity…  Listen to Him as He tells you that His sacrifice of Himself on the Cross will be the one and only sacrifice that saves all humanity from sin, from death. 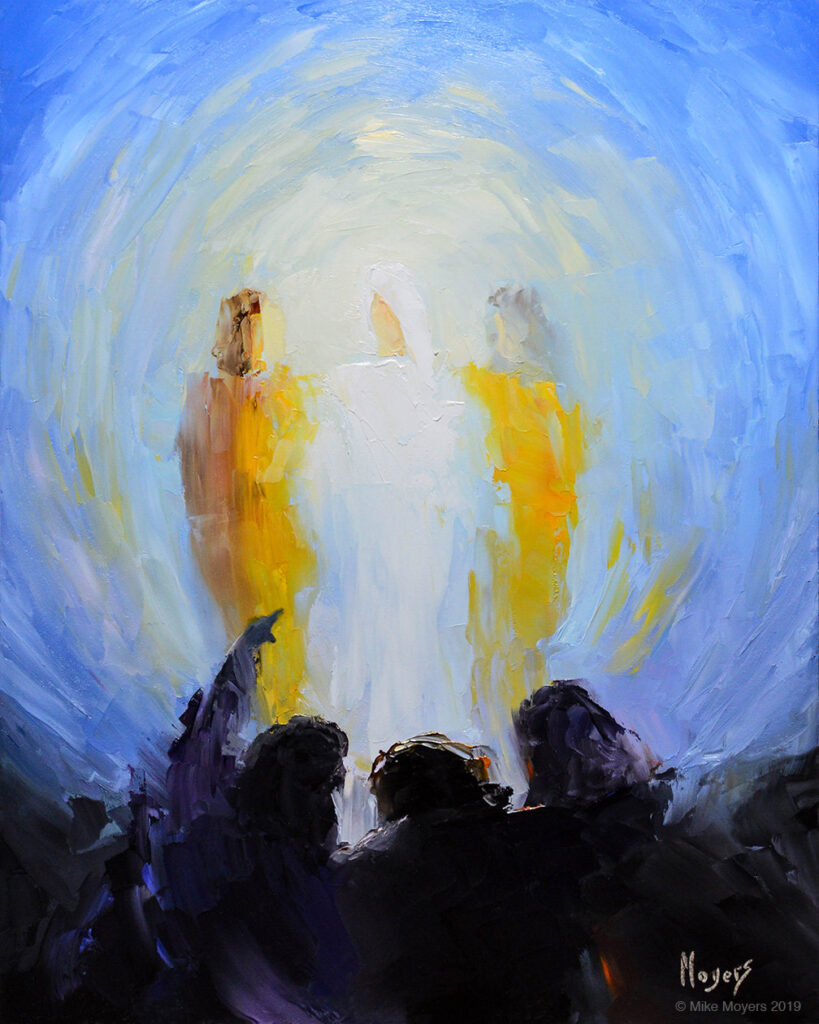 Despite Peter’s experience on this mountain of Transfiguration… we know the rest of the story.  We know he will in fact be tempted by satan – and he will fail, most especially through Jesus’ arrest, unjust trial, passion, and death where Peter will deny he even knows Jesus and then abandons Jesus in His hour of need.  After those experiences, Peter himself will then need to Listen to Him speak words of forgiveness, mercy, healing so that he can once again take his place as the head of the apostles, as the first Pope, as the rock that Jesus intended to build His Church upon.

For you and I, things aren’t any different than they were for Peter.  This is why every Lent, we start with the temptation of Jesus and the story of the Transfiguration.  It’s clearly laying out that every follower of Jesus experiences the tension between both realities.  For the season of Lent, I’ve been using this Lenten companion by Fr. Mark Toups – such a great spiritual writer – this is the 4th book of his I’ve used for Advent and Lent – but he’s raised a bunch of really impactful observations.  One of his observations he shared was that the two people who know you the best are God and the Devil… and he suggests that it might be good if we would be the third.

His point is that we all have patterns, weaknesses, triggers, struggles.  God knows them.  So does the Devil.   When we are honest with ourselves about those things… when we take stock of them and are open and honest to do a thorough examination of conscience…   When we begin to confront how often we have indeed been tempted by satan and given into them  – then we’re left with a choice:   we can wallow in despair, we can allow ourselves to continue to be tempted by Satan who tells us we’re never going to change, there’s nothing we can do, this is who we are, this is how we live, just live with it.  Or we can listen to Jesus – Listen to Him who calls us to turn away from these sins, to truly repent of them… meaning going to confession and just put them in Jesus’ hands.  Listen to Him who calls us to change, to a complete change and transformation of heart.  To Listen to Him as he calls us to follow him after we experience that change of heart each and every day as we navigate set backs, and trials, and struggles… Listen to Him as we encounter the Cross ourselves as He tells us, we can carry it because He walks with us.

It all comes down to which three little words we are going to allow to take root, allow to define our thoughts, words, and actions.  Are we going to be people who are simply TEMPTED BY SATAN… or will we hear God the Father’s direction calling us to LISTEN TO HIM?