Latest News
Home /Blog/“GAME ON” (or in other words REPENT)

Twice in the last decade, our Newman Catholic Center at Montclair State University has been fortunate to have a Vatican-trained exorcist, Father Vincent Lampert with us to share his experiences in a public lecture.  It was fascinating to see how huge the interest in this topic was… both times we hosted it, by far it was the largest attended event we had ever sponsored. People were riveted and understandably freaked out with stories of heads spinning, bodies levitating, peoples speaking in unknown ancient languages or with a completely different voice, bodies crawling up a wall like a spider. They were even more impressed by Father Lampert’s faith – and how calm and confident he was in sharing his experiences.  He was in no way glamorizing the evil things he had encountered and confronted in his role as an exorcist.  No matter how bizarre or dramatic the story, Father Vince was unimpressed by these tricks of the devil and saying Jesus was and is far more powerful… that faith in Him was always victorious…and that was the thing that was and is most impressive that he wanted us to leave those nights remembering.

Thanks so much for stopping by to read this, my homily for the 1st SUNDAY IN LENT – February 21, 2021, for sharing it on your social media posts and your feedback and comments! For the audio version you can get them at SOUNDCLOUD click HERE or from ITUNES as a podcast HERE. Thanks again… I hope you and yours experience all of God’s blessings today and always! In Christ – Father Jim

Sadly though, my ulterior motives in hosting the event were not realized – hopes that the hundreds who came out in the middle of the week for 2 plus hours at night for a lecture would make their way to coming to the Sacrament of Reconciliation – recognizing how long it had been since they had been to confession and doing something about that, or start coming to Mass didn’t happen. Perhaps there’s some truth to the line that philosophers, poets, and Popes have been paraphrasing over the last century or so:  “the greatest trick the Devil ever pulled was convincing the world he didn’t exist”.  Some, for whatever reason, remain unsure about the devil and the reality of evil and those influences that continue today. They came to the lecture out of curiosity but remarkably remained unconvinced.

Worse is the great number of people who did attend were raised Catholic and while they were making the sign of the cross as they heard different stories and seemed appropriately nervous about some of the things they heard, it seemed many of them believe they’re powerless or there’s nothing they can do about evil – either in their lives or the world around them.

Father Lampert shared an example of that attitude from his own experiences.  A family had contacted him about concerns they were having for their youngest daughter.  She was terrorized by these visions of demons.  So this family reaches out to find him, an exorcist, (one of only about a hundred in the United States) who made his way to go visit with the family at their home.  As he spent time at their home, talked with them he said he couldn’t help but notice that on their computer screen was a screensaver with the face of a demonic creature and that as you looked on their shelf and the entertainment center in the living room that there was a bunch of violent computer games right there out in the open.  Fr Lampert suggested that an obvious first step was that they needed to change the screen saver and get rid of the games.  The family argued back that the games cost a lot of money, they were fun, they were harmless. When Father Lampert pointed out that they had invited him, an exorcist into their home and it seemed that they simply wanted him to do something to “fix” their daughter say some prayers, and throw some holy water to make everything better – rather than recognizing – that these images, these “games” were pulling them and their family, their home, their daughter into things of darkness.  They wouldn’t hear of it.  In fact, they asked him to leave.

It was amazing to hear that… How could they be so blind, so resistant, and hesitant?  But are we any different?   Do we recognize we are in a spiritual battle and are we ready and willing to engage in this fight against sin, against evil, against Satan and his demons or not?  That’s the question we’re hit with on this first Sunday of Lent.  Because despite the watered-down, “nice version” of Christianity where people incorrectly think Jesus is primarily focused on “loving our neighbors” and “turning the other cheek” – the reality is much more pointed and direct as he says in those closing words of this scripture we just heard – Repent and believe in the gospel.

This scripture from the  Gospel of Mark, is considered the oldest of Gospels.  Mark saw such primacy to this that these are the very first words Jesus speaks.  Up until this part in the 14 verses that preceded it, we had the Baptism of Jesus by John the Baptist – where God the Father’s voice is amazingly heard and He says of Jesus “You are my beloved son with you I am well pleased”(Mark 1: 11) Then Jesus goes into the desert to pray, fast and reflect on this clarity of his identity and of his mission for 40 days/40 nights.  (See that’s where we get the whole “Lent” thing). And curiously in the midst of that, we read that Jesus was tempted by Satan.  Three little words that say a lot.

Satan’s arrogance is amazing.  That Satan would even make the attempt on Jesus.  Jesus being fully divine and fully human experiences the fullness of human experience – including free will.  Satan has had a pretty successful track record from the first of human beings, Adam and Eve of getting nearly every human being to fall to some extent to his temptations, so he attempts to tempt Jesus.

Satan is defeated in this desert confrontation, just as he is defeated every time he comes face to face with Jesus – most definitively on Easter Sunday, where his seeming victory of Good Friday with Jesus’ death on the Cross is completely upended as Jesus rises from the dead.  Which has only intensified Satan and his demons hatred for God, and towards the things of God – most especially – us, who are made in God’s image and likeness.   Which is why this first Sunday of Lent this Gospel is so crucial as is the reality of this spiritual war we’re engaged with, whether we want to believe that it’s happening or not.  And as Jesus says those words Repent and believe in the Gospel.  He’s telling us – the fight is real – and the game is on.  He is calling out to every one of us to have a radical transformation of our priorities.   That transformation flies in the face of conventional wisdom that says we can do whatever we wish; that no one has the right to tell us anything and that we are in fact gods of ourselves.  We might think we don’t actually think or act like that – but if we’re honest, really honest with ourselves, we might find that struggle, that tension within is more real than we like to admit. 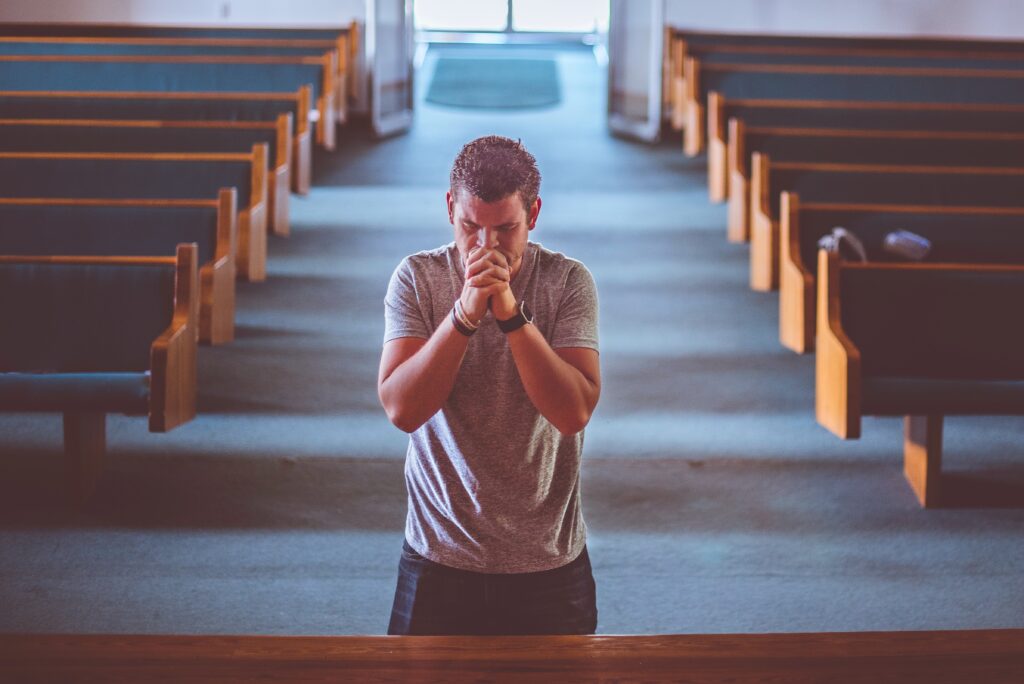 Repenting means we’re called to live a life more than by the very unspecified, generic category of being “a good person” whatever that means.  How often do we say I’m a good person as we begin explaining why we can do this thing that is sinful or push back and say “who are they – who is he to tell me what to do?”    Repenting means even recognizing that there are things that are sins…  Repenting means rejecting all the sins that we continue to succumb to promising pleasure -from alcohol and drugs, promiscuity, and pornography.  Repenting means taking the 10 commandments as commandments and not suggestions.  Repenting means seeing the 7 deadly sins as deadly (and to back up if we’re not aware of them or never even heard of them to look them up – Pride – Lust – Gluttony – Greed – Sloth or laziness – Anger or wrath and Envy) Repenting means making a good and thorough examination of conscience and then yes making a good, complete and thorough confession.  Jesus gives us the remedy of healing of our sins in the Sacrament of Reconciliation yet so few ever utilize it thinking I don’t need it – where the reality is every single one of us does – including me personally, which is why I have to make sure I get to confession at least once a month.