Latest News
Home /Blog/THIS IS NOT WHO WE ARE?

People were rightly horrified to see dramatic and frightening images from the nation’s capital this past week.  The assault on “the People’s House”, the intimidation of elected officials, the deaths that occurred is devastating and infuriating.  There is justifiable outrage and condemnation of such an unprecedented attack.  One of the responses that many expressed and repeated in the wake of all this that stood out was:  “This is not who we are…”   That’s understandable.  We don’t want to be in any way connected with extremists.  So saying that is one way to try to distance ourselves from some really ugly stuff.  But one of the problems is that it’s not completely true.  Those sentiments demonstrate a lack of self-awareness of ourselves and who in fact we are.   Because the evil that took place on Wednesday didn’t just happen.  Nor is it an isolated event – or limited to one political position.   Sadly commentators and politicians are less likely to pause like they may have in the not so distant past at these flash points and point to our treasured freedom of speech and encourage calls for more dialogue,  respectful debate, and ultimately unity.   Instead almost immediately the blame game, calls of hypocrisy were being leveled even as brave police officers were still putting their own lives on the line, to try to prevent any further death, violence and destruction.

Thanks so much for stopping by to read this, my homily for THE BAPTISM OF THE LORD January 10, 2021, for sharing it on your social media posts and your feedback and comments! For the audio version you can get them at SOUNDCLOUD click HERE or from ITUNES as a podcast HERE. Thanks again… I hope you and yours experience all of God’s blessings today and always! In Christ – Father Jim

“This is not who we are?”  Far from Washington DC, the name calling, finger pointing was taking place coast to coast online.  A friend who is a rabbi rhetorically asked in a post on his facebook page “ Is it worth losing relationships over politics?”  To which someone wrote back “depends on with whom.”  That was just one example that was simple and not profane that could be shared.   Angry, divisive rhetoric (which came from all political vantage points and just a reminder, whenever you encounter something divisive, the devil’s not far away) was being shared, amplified and leveled in ways that seemed too easy for people to type and press enter to.

The hard truth:  This is who we are.  We are broken people.  We are easily tempted.  We have selfish, self-centered impulses and desires.  Those are realities.  They’re ugly realities.  They’re not things to boast about or be proud over.  They’re things that if there is any desire for holiness, we hate about ourselves… and even if we don’t desire holiness, we probably still hate about ourselves as well, we just don’t know why.   They are things we recognize as ugly and destructive – especially when we see them in other people.  They are things that we can deny are within us.  But the truth is that spiritual battle is ongoing within each and every heart and soul.  We were made and created in God’s own image but way too often, way too easily we forget that truth about ourselves – and one another.  That in short is why this is in fact, who we are.

The good news is that we don’t have to choose to remain that way.   That is at the heart of this celebration of “The Baptism of the Lord.”  This is one of the celebrations that closes the Christmas Season, where we celebrate how God becomes one of us, comes to be with us, comes to save us from ourselves – from succumbing to sin and death.  Here in this moment before Jesus begins teaching, preaching, healing what does He do?  Jesus is baptized by John

He doesn’t need this “baptism” which was more of a spiritual bath, an act of repentance.  But He gets on line.  As God become Man, Jesus has stepped into our human experience.  As he goes to the Jordan, Jesus encounters people who are very much aware of who they are.  John the Baptist had been preaching and calling those sins out – pointing out the hypocrisy of his day and age among the Roman government overlords, among the Jewish religious authorities and teachers, among all the people themselves.  John had been telling them that the God of Israel, the one who had made covenants with Noah, Abraham… the one who gave his commandments and parted the Red Sea through Moses and was constantly offering His people a way out from the sin and death that they kept succumbing to was going to offer a definitive, final and in fact the only way out, the only way to receive the redemption, the salvation they instinctually knew that they needed in His son Jesus.

Jesus, that one to whom John prophesied, who’s sandals he felt unworthy to loosen, goes to the Jordan river to meet those people awaiting His redemption.  Jesus goes to be with them in their need – and shows them that they do not have to choose to remain where they were.  If they wanted to confront who they are broken and in need…   If they wanted to become who God created them to be, who God called them to be,  then they need to heed the voice of the Father identifying Jesus as the beloved Son with whom the Father is well pleased.  They need to follow Him so that they to can become beloved sons and daughters themselves. 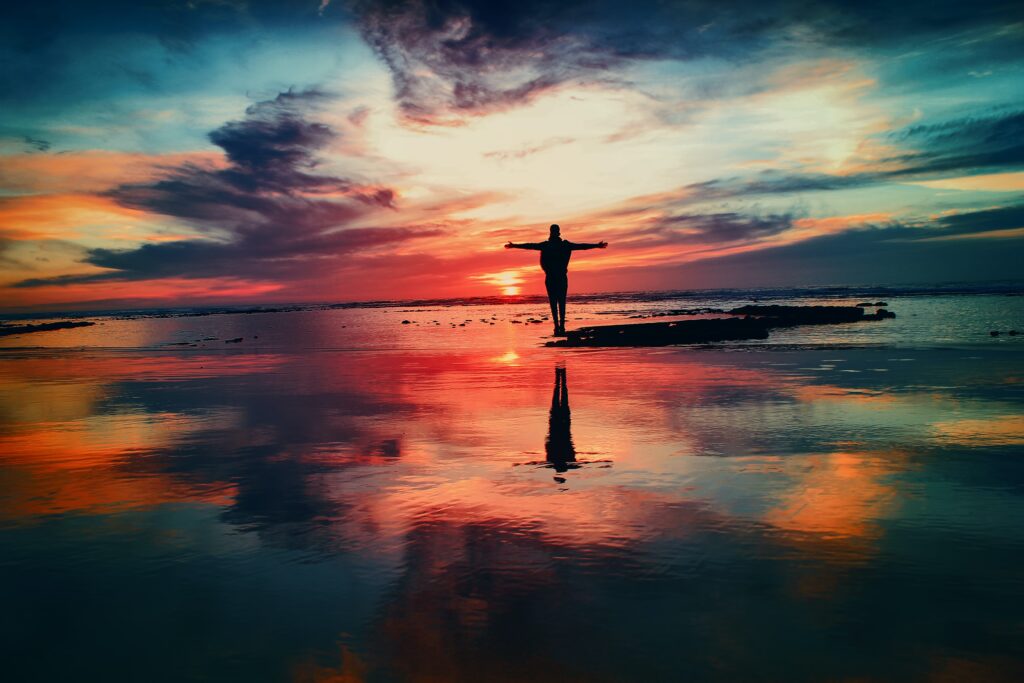 So do we.  The very idea of “Baptism” changed by Jesus entering those waters.  Jesus Christ “is baptized not to be made holy by the water, but to make the water holy” (St Maximus of Turin) Once we’ve experienced those waters ourselves we were made new creations, claimed for Christ by the sign of the Cross traced on our foreheads… washed clean of the original sin which had defined, diminished, disabled humanity since the fall of our first parents, Adam and Eve… and raised to the dignity as we were anointed as His priestly people.    The Baptism of the Lord calls us to remember God became one of us, but not to leave us here wallowing.  We have the grace and the ability to become more than who we are, into who God calls us to be His Beloved Sons and Daughters.  That generous, eternal life changing gift of faith was entrusted to each of us personally on the days of our baptisms.

We don’t see or hear a lot of people acting that way.  Which is why, to steal a phrase (again I’m going to keep repeating this over and over) what we’re doing here is essential.  We need the constant nourishment of God’s word in these scriptures.  We need to take and eat the food of eternal life, Jesus’ Body and Blood in the Eucharist.  The Holy Sacrifice of the Mass continues to renew our life as the baptized.  Then on going from here, we need to live as the beloved sons and daughters out there in this crazy, messed up world of ours by how we speak, how we treat others, particularly those we disagree with or even hate, how we care for others, especially those in need.    When we do that, it invites others.  Invites them to acknowledge their brokenness and need.  Invites them to ask if they truly believe they can be saved by a government, an elected official, or some social media platform or different figures on them pontificating and screaming.  Invites them to experience the authentic transformation they seek by listening to God the Father and who He calls us to be.