Latest News
Home /Blog/WHAT GOD WANTS TO CONCEIVE IN YOU

If you haven’t completed your Christmas Shopping yet – do your family, your friends, even yourself a favor and buy a copy of the DVD The Human Experience.  You can even stream it on Amazon Prime if you want to watch it there (and no, I don’t work for the producers or get a “cut” of their sales!  These good Catholic guys are still trying to work out of debt for making the film!)

Hi everyone here’s my homily for the FOURTH SUNDAY OF ADVENT December 20, 2020.   Thanks so much for stopping by to read this and even more for sharing it on your Facebook, Twitter, Instagram and everywhere else people share social media posts and your feedback and comments! For the audio version you can get them at SOUNDCLOUD click HERE or from ITUNES as a podcast HERE. Thanks again… I hope you and yours experience all of God’s blessings today and always! In Christ – Father Jim

In this incredible 90 minute documentary, a group of brothers set out on a journey to get to the burning questions that humanity asks – Who Am I – Who is Man?  Why do we search for meaning to life?  I’ve seen it maybe a dozen times already and am moved every time I’ve seen it.    I know I’ve mentioned scenes from it before in a homily, but it’s that good, there’s so much in it that I’m still digesting it.  There’s so many scenes that really stand out in my mind.

One scene that re-emerges in my memory was about Doctor Anthony Lazzara who we meet in one of the several experiences shown in the film.  Dr. Tony had held a tenured post at Emory University, in Atlanta, Georgia, where he supervised these high-tech children’s wards at two of the university’s hospitals.  He had this cutting edge career there where had built a stellar reputation. He had job security.  A nice home.  Financially, he was doing well.  He had friends, a nice social life.  He knew he was helping people.  It was a comfortable existence.  And no doubt, he could’ve continued on his life this way and been considered “one of the good guys.”

One day on a trip to India, for a medical conference, everything for Dr. Tony changed.    He said that as he came out of a restaurant with a colleague he saw something under a filthy blanket – was this an animal, a child?  He didn’t know, because he and his friend felt there was nothing they could do, so they left “it” there.  But that memory stayed with him and he couldn’t get the pictures out of his mind of the incredible suffering he witnessed of children, people literally dying in the streets because they lacked just some very basic medical care.  It shocked him out of his comfort.  He said that over the course of two years after this visit, he gradually came to the realization that he felt called to leave his practice, leave his friends, leave the world that he knew to set out – not to India – but to Peru, where he opened a medical orphanage.  The Villa la Paz (Home of Peace) as it is called welcomes children who were born sick, disabled – some severely so (there was this one little boy in the film named Victor who was missing a leg and two arms) children that before Doctor Tony had establish this home, some would’ve abandoned them, left them to die – because their parents couldn’t or wouldn’t take care of a child with so many needs, who wasn’t “normal.”

What is so amazing about seeing these children when you see these kids faces you can not not be moved, be blown away.  They proclaim by their very existence to a world that would simply focus on what’s “wrong with them,” on their brokenness and respond  DON’T YOU DARE DISMISS ME – GOD LOVES ME AND DESIRED ME INTO EXISTENCE.  They don’t say it in words like that – they say it in their strength, they bear witness to it in their resilience – they testify to it with their joy – true, authentic Joy.  (One sad side note, I had a college student say to me after we screened the film“I keep wondering – why are those little kids who have so little, so much happier than I am who’s got everything…”)

These kids stories are being told in part because Doctor Tony.  He said that when he came back from Calcutta, he knew that he was doing good work at Emory, but he said he “thought, what I was doing here in the United States, anybody could do, really.”  That opened him  to asking “What great things does God want to conceive in me?”  And he was willing to trust those plans, those dreams of God to say“ Yes”.

That’s a beautiful aspect of our lives as Christians:  that we witness in the present world how the Gospel isn’t some story from the past.  We don’t “read” the Gospel as a history lesson.  When God’s word is proclaimed, it is alive, it is a word spoken to us here and now.  And Doctor Tony is just one (notable) example of today’s Gospel, this beautiful pre-lude to the Birth of Christ at Christmas.  St. Luke tells of His “incarnation” – when Jesus came into humanity in the womb of Mary.  That in itself is an overwhelming thing to consider, that the almighty, eternal, Holy One would step into human history in the meekest, simplest, quietest way possible.

But pause for a moment – and think about how all of this hinged on Mary’s response.    Would she be open to imaging “What great things does God want to conceive in me?” 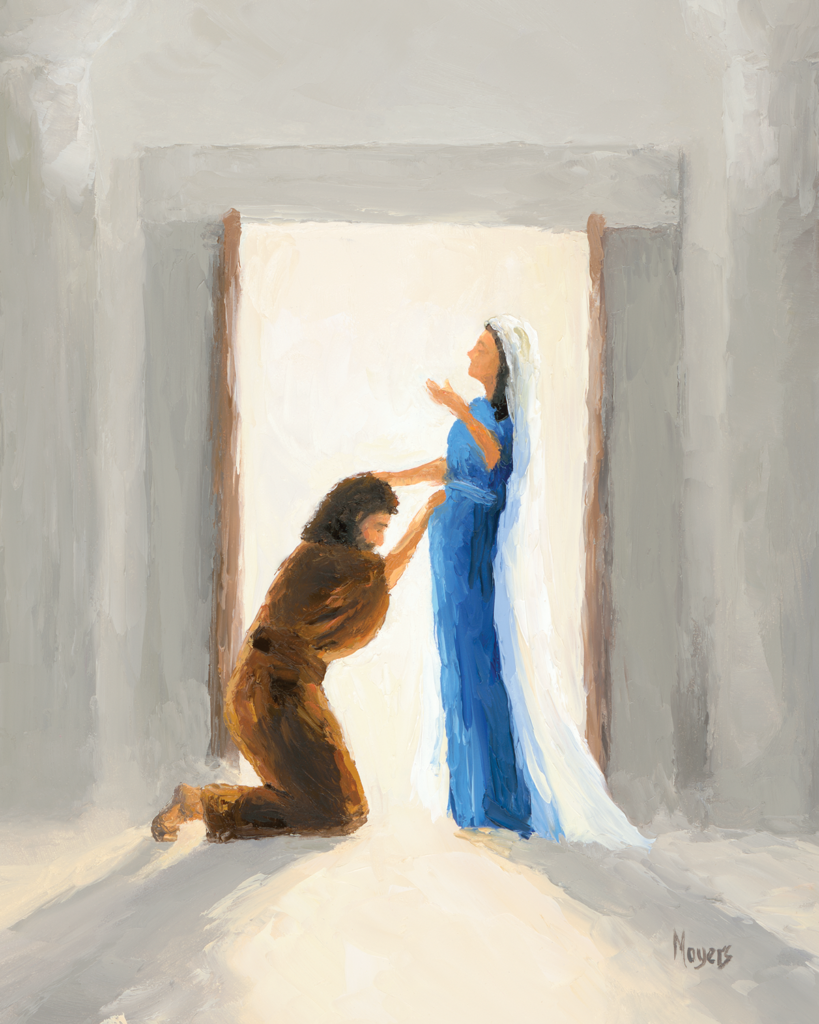 This moment of the Christmas story is incredibly striking on so many levels.  One being that it was Mary who had to have shared this story.   It was only she and the Angel who were there for this discussion.  And how humble she was in her recollection?  She doesn’t take any glory for herself.  She doesn’t recount all the sacrifice she had to have made in saying Yes to God – that Joseph and her had to abandon their plans, their dreams.  She doesn’t dwell on how hard this was, the pain she endured as the Mother of God (imagine her having to witness the brutality of her only son’s Passion and Crucifixion… ) None of that is there.  Mary’s remembrance of being invited into the history of the salvation of the world by Jesus Christ finds her simply blown away that God would conceive His son in her.   This whole experience confirms everything she had learned about her faith in God.  Jesus’ entrance into humanity through her took all that she in her heart had believed to this very point to a whole new, deeper, intimate understanding.   All of the negative, challenging aspects from her story that she must have experienced seem to fade from her mind.  She’s left awestruck remembering the words of the angel – words that rang true in her own life:  that nothing will be impossible for God.

We’re being offered that same invitation – to be a part of God’s plan.  To experience how miraculous things unfold when we are open to imaging, open to asking ourselves “What great things does God want to conceive in me?”  Because it’s easy to dismiss all of this, isn’t it?  Right now the devil’s whispering “Well that’s Mary, she’s the Mother of God” or “That doctor – well sure he could do that, he probably had a lot of money that enabled him to take such a risk” or “God’s only calling holy people to do holy things.”  All of those things are lies, tremendous lies that limit God’s power.  That limit us.

Because the beautiful message the Gospel is proclaiming to us is that God wants to include us in His wondrous plan.  That’s one reason why we hear at Mass several times “The Lord be with you” – That’s not just a nice Church greeting.  It’s a reminder.  It’s a call – That God is with you.  He is calling you to be a part of his great, creative, mysterious, plan.

Less than a week from now, we will gather to celebrate the Birth of Jesus Christ.  People around the world will recall that historic event that has forever changed and transformed human history.  But the beautiful message from the Gospel is that God is inviting us to live that mystery ourselves, to once again bring Christ to birth here and now.  Do we dare to ask “What great things does God want to conceive in me?”