Back in fourth grade, my family took what might have been my first visit to Washington D.C.   It’s kind of interesting what stands out in memory almost 40 years later:  – I remember it was Easter week, because curiously there was a statue of the “Risen Jesus Christ” on the steps of the U.S. capital with Easter lillies in the shape of a cross – which was unexpected. We soon learned, as my Mom took a picture of me trying to touch Jesus’ hand that it was placed there by a group of Christians who really, really, really wanted us to take their pamphlets and come to their bible study.  That was memorable.  The 4 hour car ride crammed with my brothers in the back seat was memorable as well for a variety of reasons that aren’t necessary to get into.   But of all the sites that we visited that week – the one that left the most lasting memory was going to Arlington National Cemetery.

Hi everyone here’s my homily for ALL SAINTS DAY, November 1, 2020.   Thanks so much for stopping by to read this and even more for sharing it on your Facebook, Twitter, Instagram and everywhere else people share social media posts and your feedback and comments! For the audio version you can get them at SOUNDCLOUD click HERE or from ITUNES as a podcast HERE. Thanks again… I hope you and yours experience all of God’s blessings today and always! In Christ – Father Jim

My Grandfather having been a Veteran of World War II serving in the Pacific Front had mentioned that he had wanted to go there.  I remember asking why we were going to a cemetery – was there someone we knew buried there?  I don’t remember all the discussions that surrounded  our going there…  But one of the most memorable parts was going to the “Tomb of the Unknown Soldier.”

I remember being very clearly told that I needed to be quiet there.  My brothers like to paint me as someone who could not keep his mouth shut for more than a minute, but my Grandfather made it clear to all of us that it was paramount that we all keep quiet and pay attention.  That this was a special, hallowed place.  Those who’ve been there know that’s a pretty accurate description.  If you doubted the seriousness of the site before arriving, a soldier in full dress uniform standing duty made it all very clear with both his presence and his announcement to keep silent and respectful – especially when they had the “changing of the guard.”  We watched with complete attention the soldiers who had these very precise movements as they marched, and switched out who was on duty.

Talking about it as we walked back away, I remember my grandfather explaining that there were soldiers who died in World War I, and World War II buried there who they were never able to identify their remains.  All that was known was that they were American soldiers who had lost their lives trying to help others who were confronting very evil forces.  That’s why we went to the tomb to show our respect, our appreciation and to offer a prayer for all those who gave their lives for our country and for those who were in need and danger.

It made a lasting impression on me, as did the words inscribed on the tomb itself:  Here Rests in Honored Glory An American Soldier Known But To God. 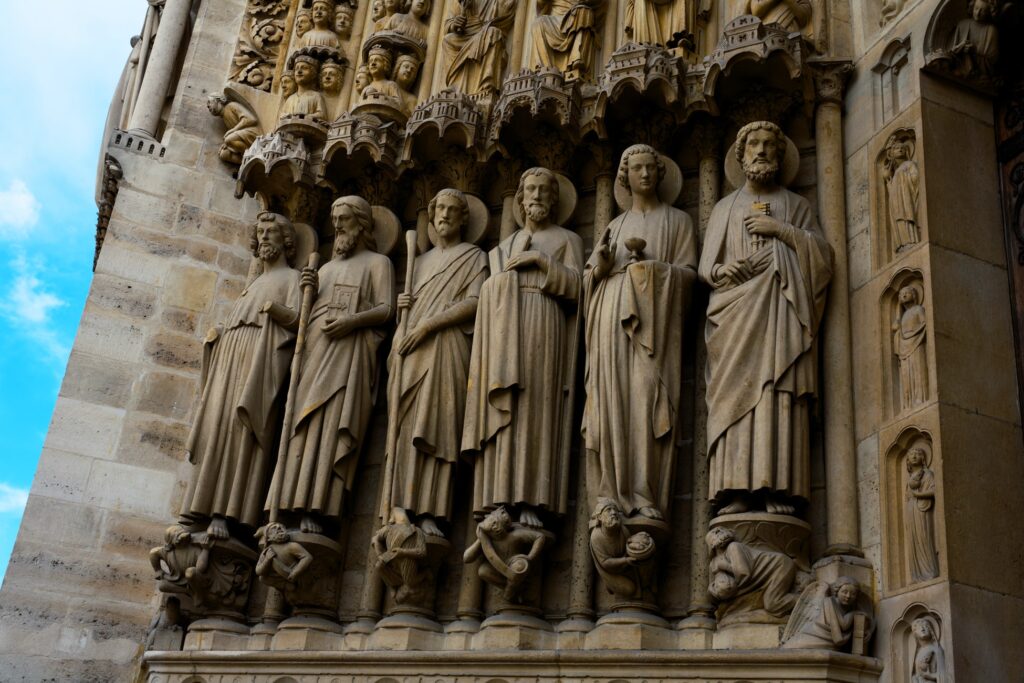 That memory came to mind in reflecting on today’s feast of All Saints Day.  Throughout the year, on a daily basis, we hear the names of men and women who we know pieces of their stories that inspire us, challenge us, even amaze us – St. Francis of Assisi, St. Catherine of Siena, St. Edith Stein, St. Faustina, St. Joseph…  Names of “patron” saints of ours, or people who we’ve grown to love and admire for teaching us about the life of faith, about following Jesus Christ and how their lives were forever changed in doing that… How Jesus was able to use them in their day and age to bring others to Him – and how even centuries later, we can still be impacted by their work, their witness.

Maybe it’s the word “All” that makes us think of this being like “All-star game” where we celebrate all of those, our favorites, our heroes in the faith.  But the reality is today is more an opportunity for us to pay tribute to the “Unknowns.”  The “Soldiers for Christ”… Saints throughout the generations or maybe we’ve encountered in our own day and age who may not have warranted the attention of the Vatican to be considered a possible Saint, but are so, Known but to God.   They are the ones we pause to celebrate today.  The parents, grandparents who helped pass along faith to their children – who made tremendous sacrifices for their families that are indeed heroic.   The good priests,  religious sisters who spent their lives faithfully responding to God’s call in their lives to lay down their lives for Him and His people – Priests, Nuns who were part of the everyday fabric of what seems on the surface just ordinary and routine but were apart of that environment of faith that impacted far more than what could be seen by an outside observer.

I’m thinking, for example, of my home parish’s first pastor – Fr. Denis Whelan.  Fr. Whelan was sent to my hometown of Clark in 1961 to create St. Agnes parish.  Literally had to start from scratch, take this whole group of people from the neighboring parish of St. John’s that had grown so big and just start a new one.  He would have Sunday Mass in my alma matter, Arthur L. Johnson Regional High School for three years.  He would raise funds to buy property, build the parish rectory, school and Church where my family would make their Spiritual home and I would be baptized and begin my life of faith 12 years later.  I remember being in Kindergarten when Fr Whelan stopped by our home on a Sunday as he was doing the “Parish Census” – a thing priests used to do to check to make sure their parish records were up to date (but were actually a way to make sure people were getting to Sunday Mass and the kids getting religious instruction and all their sacraments of initiation — another great thing from the past we should not have abandoned, but I digress).  Anyway, we weren’t home.  It was Sunday so we were at Grandma’s for dinner of course.  Fr Whelan was Irish, he probably forgot what an Italian family with an un Italian name like Chern were doing on a Sunday afternoon.  In any event, he left a note that my parents read saying “George and JoAnn, it’s always good seeing you and the boys at Mass.  Keep making sure little Jimmie is there every Sunday!”  As a 5 year old I was kind of shocked “that guy that’s up there every Sunday knew me.” I remembered not only that note, but how much that meant to my parents.  How much they respected and important a figure he was to them.  When he died in 1984, the morning I served as an altar boy for the first time, I remembered their sadness, as well as everyone else’s in the parish.  And it’s striking that 36 years later, people still talk about Fr. Whelan, what a good, holy priest he was, like he just died.

Whether he is a “saint” or not – is known but to God – but on the feast of All Saints, we remember such men and women in our own lives, we acknowledge the millions and millions of others over the millennia who too have been Saints that remain nameless to us,  we thank God for all of their examples as we ask their intercession that we too will one day join their company in the eternal home Jesus promised us.