Thursday with it being the start of October, someone posted online: “Good News, 2020 is 3/4 over!”  Which was quickly followed by messages ranging from “it’s only 3/4 over…it feels like we should be a lot further along than that” “don’t know if we’re going to make it thru another quarter…” “Where do we forfeit the rest of this year and just get to 2021?”  Undoubtedly, by any measure this has been a historically challenging year on seemingly every level.  Whether it’s the viral pandemic and all of the things resulting from that… civil strife and seemingly growing polarizing division we see, we experience whether virtually or in person… horrific weather events from wildfires to hurricanes.  And that’s not even taking into account the challenges, the struggles, the setbacks and difficulties so many people are dealing with on a local level in their homes, their families.  It’s understandable that there’s been widespread weariness, frustration and even depression.

Hi everyone here’s my homily for the 27th SUNDAY IN ORDINARY TIME – October 4, 2020.   Thanks so much for stopping by to read this and even more for sharing it on your Facebook, Twitter, Instagram and everywhere else people share social media posts and your feedback and comments! For the audio version you can get them at SOUNDCLOUD click HERE or from ITUNES as a podcast HERE. Thanks again… I hope you and yours experience all of God’s blessings today and always! In Christ – Father Jim

With all those and probably a list of other challenges that escape the mind right now, it can be hard not to have a somewhat dismissive reaction to St. Paul’s words in that second reading to the Philippians today.  Have no anxiety at all  he says…  Imagine posting that online you can already hear the responses – “easy for you to say Paul…” “For Real?”  Some might relegate those words simply to a historical context and imagine that they are intended just for this particular Christian community of Philippi some 2,000 years ago.

While that is true… Paul was writing to that community for particular reasons, the beauty of Catholic liturgy is that we believe that St Paul was inspired by God to do so.  That the Holy Spirit guided Paul’s mind, heart and hand to compose those words and that this divine message was not limited to just the people of Philippi who were suffering persecution because of their commitment to Christ.  By God’s providence, we are hearing Paul addressing these words to us, here, in the state of New Jersey, in the United States, in October of 2020.

So take a second to just think of whatever it is that is causing you anxiety right now.  Whatever the list of worries, concerns, doubts and fears you’re experiencing… short term or long term… things for yourself, for your loved ones, your neighbors, our community, our nation, our world.

Paul says… God says: Have no anxiety at all.

That’s not being dismissive of your legitimate anxieties.

That’s not saying deny whatever realities are causing you distress.

That’s not saying fake it till you make it.

Have no anxiety at all – because Paul reminds us, we have a God who loves us… Who is waiting for us to acknowledge His presence… Longing for us to recognize His history of goodness… and to cast our prayers, make our requests known to Him.

The problem so many of us face is that all the fears, anxieties, worries… We can let them run rent free in our minds, our hearts, and cause even greater stress, worry. 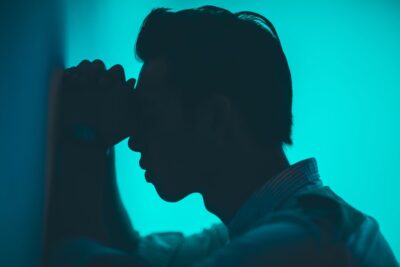 It reminds me of this story I heard some years ago: A man was traveling across the country by sneaking from one freight train to the next. One night he climbed into what he thought was a boxcar. He closed the door, which automatically locked shut and trapped him inside. When his eyes adjusted to the light, he realized he was inside a refrigerated boxcar, and he became aware of the intense, freezing cold. He called for help and pounded on the door, but all the noise he made from the inside the car failed to attract anyone’s attention. After many hours of struggle, he lay down on the floor of the railroad car.

He wrote messages in the floor detailing his ordeal. “It’s so cold…” “I can feel my body going numb…” “I’m dying… I know this is the end…”  “Tell my family I love them.”  Late the next day, repairmen from the railroad opened the door and found the dead man inside. Though the man had all the appearance of having frozen to death, the truth was the repairmen had come to fix the broken refrigerator unit in that car. Most likely the temperature of the railroad car had never fallen below fifty degrees during the night. The man had died because he thought he was freezing to death.

That’s not just a litany of things that we should aspire to, ideals we should strive to achieve – he tells us to think about those things.  Are we doing that?  For most of us, I think we find ourselves climning into a refrigerator car… I know that if I watch more than 10 minute of news or enter into debates online or allow the media in anyway to dominate my environment, that becomes nearly impossible.  The manipulation from so many sources for a wide-spread number of reasons and agendas are not thinking about what is true, honorable, just, pure or lovely.  So we have to be even more vigilant and focus on the signs of God’s goodness, His presence, how He has shown up and shown out.

A few months ago I added “journaling” to my prayer life.  That was never something I really committed to or did to a great extent before in my holy hour or daily prayer.  This tool that I’m using has these daily pages and one section at the start of the day is listed simply as “Gratitude” and you’re asked to name 3 things you’re thankful to God for.  Here I had started this during a viral pandemic, with shutdowns, so many unknowns, an avalanche of negative news tweeting, flashing on the phone – all things that most definitely have been discouraging, frightening, infuriating to me – and one of the first things I had to do to start my day, start my prayer by naming 3 things I want to thank God for.  And being stubborn, I decided to be stubborn to myself – that I would not move along with anything else in my prayer until I did that.  Some mornings, I have more than three… I can just rattle off different unexpected blessings, or things that put me in a stellar mood weeks earlier that I still can feel joy radiating from whatever it was that I was thankful for.  And then there were – well, I should say, that there are mornings – not so much.  OK I’ve thanked God for my hot coffee probably a few times.  But the beautiful thing I’ve learned is that when I have to sit there and really really think or dig deeper… perhaps it’s my pride, my selfishness that’s obstructing that vision.  Maybe I’ve taken some things for granted, or just lost a sense of awe for a miracle.  Whatever – the point isn’t to now add some Italian Catholic guilt to the anxiety.  It’s turning my gaze away from the things of this world, the sources of anxiety and turning towards our Father who loved me into existence, sustains me, and longs for me to long for him.

When we think, remember, emphasize on things like this that are true, honorable, just, pure, lovely and gracious – then Jesus’ message in today’s Gospel comes to life.  On the surface, this parable doesn’t make sense…  The story is an allegory showing how God has given his people dominion over his creation – and so often, many misuse, take advantage, even destroy it… ignoring calls to conversion, repentance.  Even when God sends his son, Jesus will suffer the same horrific treatment.  But despite that human impulse which demands justice, or rather  retribution for such treatment – Jesus shocks the listeners.  No God won’t simply obliterate those individuals who subject Jesus to a wretched death… but rather his death would unleash God’s love, mercy and forgiveness in a way no one ever anticipated.

This makes St. Paul’s point even more dramatically – No, we can’t ever forget that Good Friday happened.  But focusing on Easter Sunday changes our perspective.  As we go forth from this place- where we’ve come to hear and receive Jesus both in word and His Body and Blood in the Eucharist – we are challenged to do the same thing with whatever amount of time, days, weeks we’re blessed to have in what remains of 2020 .  Yes, recognizing all the things that seem to challenge our sense of security, of safety, that seem to point to a world that at times seems to be spiraling out of control.   But then to remember Paul’s words:  Have no anxiety at all..   Jesus is ultimately in charge… and when we think about that and remember all the other things that are true, honorable, just, pure, lovely, gracious – our hope is renewed as we recognize the truth that St Paul’s closng words reminds us – the God of peace is with us.