The hit show Seinfeld seems destined to be re-aired forever in syndication.  Which is welcome news for fans – like myself – who’ve seen every episodes countless times in the over 30 years since it first aired – repeated viewings don’t diminish the laughs of the self-described show about “nothing.”  A few weeks ago, what’s considered a fan favorite episode was on again.  The Soup Nazi is one of those seemingly too ridiculous to be true / yet could very well be episodes… with larger than life characters and stupidity that have made this show so memorable for so long.

Hi everyone here’s my homily for the 24th SUNDAY IN ORDINARY TIME – September 13, 2020.   Thanks so much for stopping by to read this and even more for sharing it on your Facebook, Twitter, Instagram and everywhere else people share social media posts and your feedback and comments! For the audio version you can get them at SOUNDCLOUD click HERE or from ITUNES as a podcast HERE. Thanks again… I hope you and yours experience all of God’s blessings today and always! In Christ – Father Jim

One part of the episode that gets a bit lost as you are understandably focused on the abnormal behavior of a chef who’s just a tad too obsessed about his soup – is this relationship between Jerry and his girlfriend Sheila.  From the opening scenes, they are so very much in love that their lack of embarrassment at showing very public displays of affection drives Jerry’s best friend George Costanza insane.  Jerry and Sheila keep calling each other this annoying lovers name “shmoopy” – they sit on the same side of a booth together in a restaurant they can’t even be apart from one another for a single moment… they get lost in a kiss with one another, oblivious to where they might be, even while waiting on a line to order soup.  What makes Seinfeld such a hit show is that it takes very relatable things and exaggerates them right to the edges between what is believable and unbelievable.  While I have never heard a couple use the word “shmoopy” to each other before (or ever since) that episode – I can remember former students who were dating using the word “babe” with each other with equally annoying frequency. 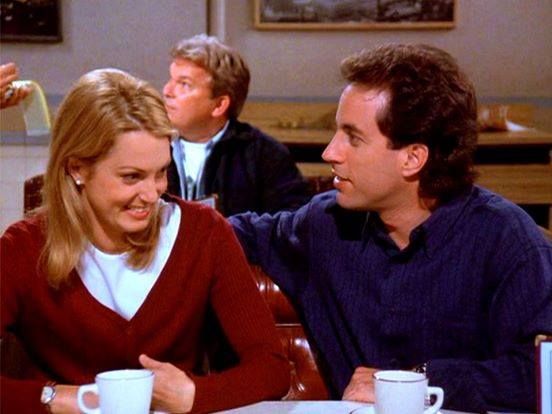 Among other things, this episode is poking fun at people who could be described as “lost in love.”  What’s comical is seeing a 30-something year old Jerry acting like a teenager falling in love for the first time looking ridiculous. But when someone encounters the sincerity of that emotion, genuine love, we know it’s one of the most precious things that human beings can ever experience.    We see it in marriage – whether it’s witnessing newlyweds in the joy and excitement of their wedding day at the dawn of their new lives together…  or on the other end of the spectrum, seeing a couple married 69 years, helping one another walk up for communion at Mass arm and arm – they don’t have to say a word, you can see how they’ve lived, experienced and embraced every aspect of their vows  – good times and bad, richer and poorer, sickness and health for decades….  the common bond seeing both couples is their being “lost in love.”  We see it in parenthood – whether it’s the unmatched happiness a mother or father has when they first become parents for the first time or the fulfillment as they watch their last child take off to start college… In all of these different examples, you see different moments, examples and witness how people can get lost in love that they seem undeterred by the world around them.

That notion of being “Lost in love” kept coming to mind reflecting and praying with this Gospel.    This passage is continuation on last week’s Gospel where Jesus began teaching the importance of forgiveness – where He called His disciples to engage in the hard work of reconciliation with one another when disputes, when disagreements, when sins arise.  We pick up with the fact that Jesus no sooner had finished giving them this high call when, Simon Peter, Jesus’ “rock” is asking for clarification.  Namely,  how far, how much, how long does Jesus intend for them to go with all of this?  You can almost hear what’s unspoken – we get it Jesus, its important to not hold grudges – to forgive, reconcile … what are you expecting?  what are the limits?  How many times is enough?

Peter is probably thinking that he’s being generous with his proposed “7 times…” imaging Jesus would say “oh yeah, that’s good, that’s a high ideal to strive for.”  He’s not prepared for Jesus’ answer – first by saying “77 times” where Jesus is twisting Peter’s answer to make it near impossible to keep track of… but then looking at Peter and imagining he might get an accounting form or sheet, he launches into a parable.

With this parable, biblical scholars tell us that when the first guy is said to have owed this inordinate sum of money, to the point of jeopardizing not just his life, but that of his wife and children to a life of slavery and losing all property is an extreme example.  It would be like saying he owed him 100 million dollars – a ridiculous sum that there’s no hope of ever being able to repay.  What would possess a man to simply forgive that debt?  Not work out a repayment plan… not try to negotiate some other arrangement or something.  No the guy who has caused this debt simply begs for mercy and he is completely forgiven.  Our human sensibilities immediately are suspicious.  (Maybe it’s a Jersey thing) What’s the angle, what’s the catch?  Seeing none you imagine the man must be crazy or it’s something else: Hearing the plea for mercy catches the one who has been treated unjustly’s heart and soul.  He recognizes that there is something of greater value, something more precious… something that maybe he too had experienced when he was down and out and felt there was no hope, when he experienced despair and thought there was no chance, no way out.  He experienced forgiveness and the only expectation was to live his life differently – to be merciful, to be generous, to get lost in the love that had so lavishly been offered to him at some point. 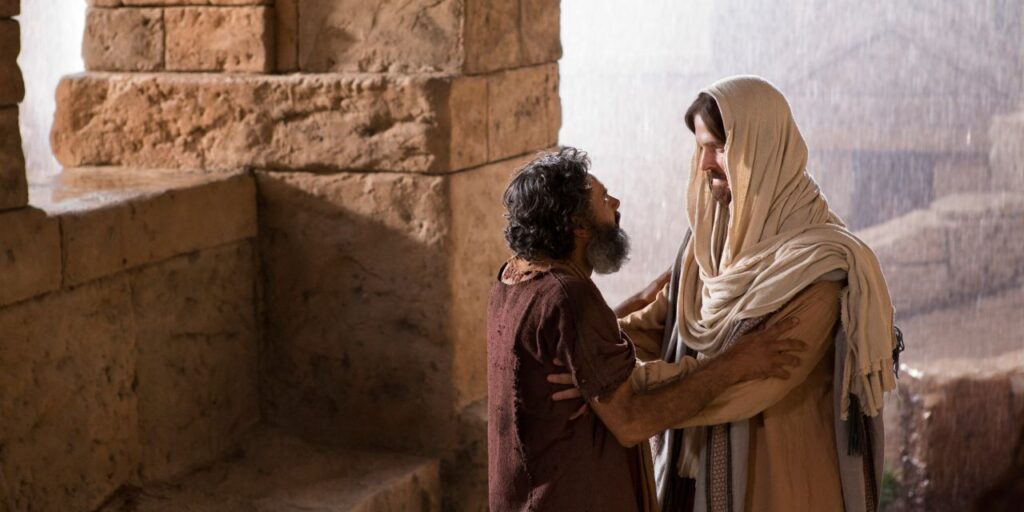 That’s what Jesus is trying to get through Peter’s (and our) sometimes thick head.  He not only hears Peter’s question, but can hear the machinations in that brain and heart of his and is looking at Peter and the other 11… He knows how hard this will be in real time – when it’s not some nameless, faceless people in a parable, but when it’s people closer to home, maybe right there in their midst:   Like when Peter’s brother Andrew can sometimes get on his nerves… or when Thomas’ questions get annoying…  Jesus recognizes that Matthew having been a tax collector, one who worked with the enemy-occupying force of Rome against his own fellow Jews that Peter (and the others) might be holding their tongues about – that there’s still some lingering resentments and hostilities there…  He knows that when Judas does what he will do to Jesus, that desire for vengeance might bubble up like a volcano ready to erupt…

He also sees, and knows that Peter too will suffer a catastrophic failure himself. When he too will betray Jesus by denying he even knows Him in his greatest hour of need – it is then that the rage and anger Peter could have towards others for these and all kinds of other infractions will pale in comparison to the rage and anger he has towards himself.

Which is why Jesus is asking them – and us to go deeper…forgiving from your heart.  Sometimes people get hung up thinking that they need to allow themselves to get walked over, treated badly and happily take it.  That’s not what Jesus is proposing.  In the parable, the one who has taken advantage of the other recognizes he’s done wrong and asks for mercy.  So there’s the element of recognizing and owning the mistake of repentance…  When that happens, just as it does for each and everyone of us, when we examine our conscience, when we recognize our sins, when we go to confession and lay them out with complete honesty and vulnerability before God in the Sacrament of Reconciliation – we are instantly, completely, washed clean.  We are lost in the love of the God who sees us, knows us most intimately and perfectly.

Not only do we need that experience ourselves – but then, we’re called to do the same.  When someone apologizes to move past the hurts and injustices and to have compassion… When someone owns the hurt they have caused and sincerely accepting that and not keep reminding them and anyone else we can think of how they did us wrong they did.  When we do that, we’re beginning to actualize Jesus’ high call ourselves.  We start living by His vision and are very much undettered by the world around us.  We begin to understand and experience what St. Paul was saying in his letter to the Romans today – that when we “die for the Lord” putting to death the desire for vengeance, putting to death that serach for restitution, putting to death the need to be proven right… it is then that  – “we are the Lord’s…”   We too are lost in love… Lost in the love of God….