“What’s the big deal if you miss Mass one Sunday – is God going to seriously send you to Hell for missing Mass one week.  You go during the week – and if we have to wait for you to go and come back it’s going to completely screw up our plans for the day, can’t you just miss this once.”     It sounded so logical and even reasonable.  My friends and I were in between our Sophomore and Junior year of college and had gotten down the shore for the weekend.  We had summer jobs and had left on Friday after work… they had been awful by the way – I was a telemarketer who was assigned to call farmers to ask them to do a survey on different farming equipment (tractors, back hoes… stuff that I had zero knowledge and interest in).  That Friday had been particularly brutal.

Hi everyone here’s my homily for the 22nd SUNDAY IN ORDINARY TIME – AUGUST 30, 2020.   Thanks so much for stopping by to read this and even more for sharing it on your Facebook, Twitter, Instagram and everywhere else people share social media posts and your feedback and comments! For the audio version you can get them at SOUNDCLOUD click HERE or from ITUNES as a podcast HERE. Thanks again… I hope you and yours experience all of God’s blessings today and always! In Christ – Father Jim

If I had gotten one survey completed in an hour of getting hang ups, and other colorful suggestions about what I could do or should do with this survey.  4:30 couldn’t arrive soon enough to get out of there, rush home, get changed, wait for my friends to pick me up… we hit the Garden State Parkway and we’re flying down – till we hit the Driscoll Bridge.  We get to the other side of that huge bridge – that you know separates North Jersey from South Jersey (no there’s no central Jersey) we’re stuck in traffic… and a 2 hour trip to Wildwood turns into 4 and a half.  Literally didn’t get to the shore house till around 9:30 that night.   So we knew that we had to make the most of our Saturday and Sunday hours to get as much Sun as possible before the long trek back on Sunday evening (and probably the same ridiculous traffic going North, now more miserable because we were going back to work)

Would God understand?  Or I should ask “Did God understand?” since unfortunately I did give into peer pressure…  Yes I’m sure that He did.  Did I go to confession?  Yes… it was years later I learned about another sin that I had committed – called “presumption” – where I was skipping Mass, kind of laughed along when a friend who argued “if it bothers you that much, don’t you have the ‘get out of hell’ thing – just go to confession.”  When you commit a sin and go with that attitude “well God will just forgive me anyway” that’s called presuming God’s mercy – it’s taking advantage of Him.  So there’s that… And the fact that my friends pointed out – they never go to Mass, never go to confession helped feed into my pride and ego – that I was better than they were, and so maybe they were right and I was just over thinking it.  Very quickly one sin had multiplied into at least three – missing mass, presumption, pride

My friends weren’t bad people – just a bad influence at that moment.  I’m embarrassed that I succumbed to peer pressure.  I still remember that whole weekend – not because of anything else other than this whole incident… it bothered me then and obviously still does (even though I know I’ve been forgiven of it – just because it was so dramatically stupid).  Sin so often begins so seemingly small, somewhat innocent or not too bad.  There’s worse things we tell ourselves – I didn’t kill anyone.

That weekend down the shore came to mind – even in this covid year where going down the shore hasn’t happened and it’s not exactly a normal “back to school” season/feeling – but I guess just the time of year – the sun, the heat makes me think about it… being around college students, I live vicariously through you all or relive my “glory days.”  But even more reflecting on this Gospel.

I love St. Peter – probably relate to him too much.  He means well.  He acts and speaks so often without thinking.  He hears Jesus share this very heavy, hard to hear prophecy about himself – that his unjust arrest and persecution, his torturous passion, his brutal death on the Cross are in the future.  Peter’s heart is in the right place – you have to love the irony of his words – “GOD FORBID LORD!” – God Forbid that happens to you God…  And then he continues ‘no such thing will ever happen to you.’

Part of why this stings is because right before this, Simon Peter identifies Jesus as “the Christ, the Son of the living God” and Jesus tells Simon Peter, that such an insight is a blessing that came from God himself.  Jesus sees the potential, the greatness within Simon Peter.  A potential, a greatness Jesus needs in order to establish His  Church…  So Jesus sees all that calls him and changes his name from Simon to Peter with that profession of faith.  Here it is moments later after being affirmed as the one who has leadership and greatness, who Jesus calls His rock as He chooses Peter as His First Pope – and now Jesus has other names for him “Satan” “obstacle”

It seems harsh.  But it’s not – it’s important on a lot of levels.  Yes Peter loved Jesus and Jesus loved Peter – there was a friendship, there was a care, a concern, a relationship… But these two weren’t “bro’s” (or bruh’s) Peter is Peter because he correctly identifies Jesus as the Christ – the anointed one- the Messiah…  Whether he fully comprehended Jesus being fully human and fully divine yet – probably not – but he had seen the miracles, heard the preaching, experienced and encountered God in ways that had captured his mind and heart.

When Jesus is getting this reflective, this serious and talking about how they are going to crucify Him – it’s not like Jesus is having a bad day, a pity party thinking “no one likes me… no one understands me…I bet they’re going to kill me” that he’s looking for his bro to say “come on… that’s not true.”  Jesus as the Christ, who has done nothing but speak the truth to them doesn’t give into self-pity.  He’s explaining His mission, while also clarifying the reality of His identity and Peter’s.

With that clarity – He’s pointing out that Peter’s revulsion to what Jesus is saying, is sinful.  It’s dressed up as compassion.  Peter may have had good intentions – but none of that diminishes the fact that Peter is denying God’s plans, he’s undermining God’s will.  Peter is saying he knows better than Jesus Christ does – which whenever we find ourselves in that spot, we have to recognize is wrong, is sinful.  Peter should’ve looked at the other bro’s – the other 11 who were probably speechless at that moment – and followed their example.

Whether it was my foolishness in college giving into peer pressure, or  St. Peter’s misguided compassion- the sin is attacking the heart of discipleship:  How often do we want discipleship to fall into our schedules… that we want Jesus to conform to our expectations.  We sometimes don’t even realize we do that.  That’s how sneaky the devil is in twisting things – just enough that we start to justify it, make excuses for it.

That’s completely backwards.  But Jesus makes sure we don’t miss that message telling us – discipleship entails denying ourselves – taking up our Cross – following Him.  That means getting to Mass on Sunday… that means following Him when we leave this place, and going with Him to Calvary ourselves.    It sounds hard because it is.  Which is why I loved this first reading from the Old Testament the prophet Jeremiah.  He’s experienced what it’s like to align ourselves to God’s will – to let Him set the schedule, the expectations: You duped me – and I let myself be duped… I am an object of laughter – EVERYONE MOCKS ME.   He’s complaining!  Being a prophet is tough when you’re telling people stuff they don’t really like to hear!  He’s lost friends, is treated badly… it’s not fun.  Yet – my favorite part is that Jeremiah is truthful, he is honest… despite all those challenges, when he’s tempted to give up, to just not go along with it, he can’t.  His conscience gets to him as he puts it – it becomes like fire burning in my heart, imprisoned in my bones – trying to rebel against speaking God’s word?  I grow weary holding it in, I cannot endure it.  There’s something beautiful in hearing such honesty…

Jeremiah knows it’s tough.  The same is true for Peter – and for each and everyone of us.  The struggle is real.    More than just getting to Mass every Sunday, getting to confession on a regular basis – being a Catholic Christian in our world, in our country, on our campus – is hard.  In truth, as much as it’s become a work of art, a symbol and something that we have great reverence for – no one likes the cross. The world around us is more actively attacking it as a symbol today more than in recent memory – but even before those more current visible attacks, the world has constantly been trying to water down the cross and tempt us not to embrace the fullness of what that symbol means. 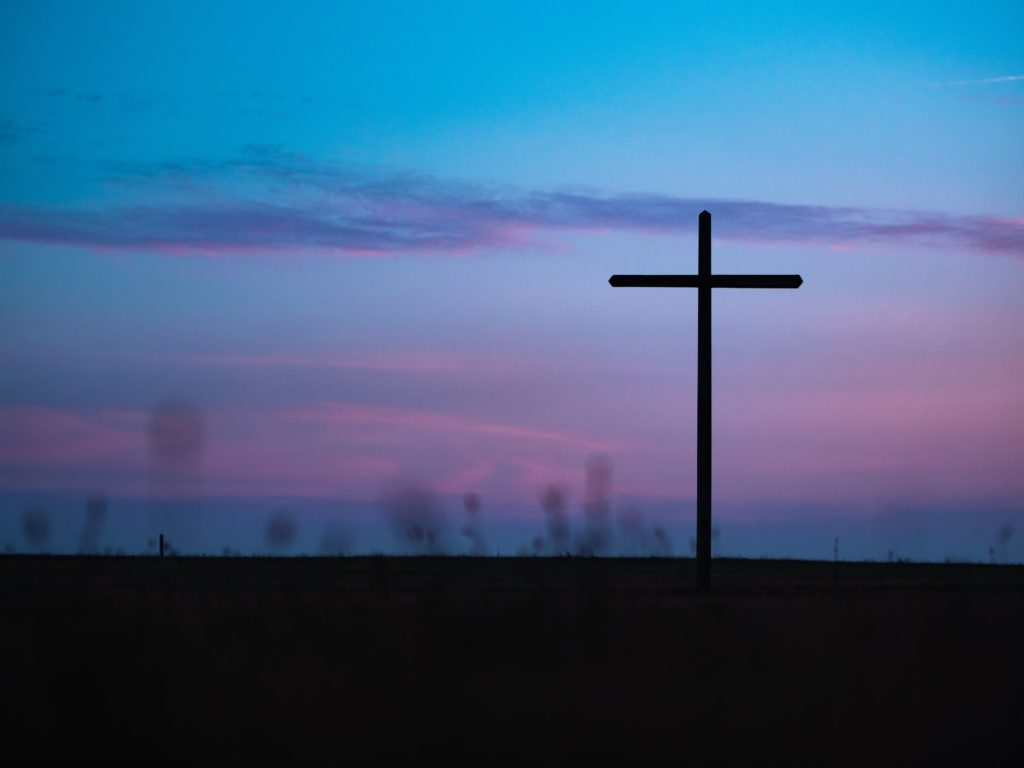 What makes the cross beautiful, what makes the Cross worthy of our reverence and adoration is what Jesus has done on the cross.  In Jesus, the cross is the means by which He completely transforms the world- with the new life of Resurrection, making real the possibility of our experiencing eternal life in His victory over that cross.

As His disciples, that is the Good News that Jesus expects us to share.  It’s that example Jesus expects us to follow Him in our acts of sacrificial love, in our acts of self-denial, in our turning away from sin and all the things of this world that tempt us to focus on the here and now, on this world.  When we do, we actualize St. Pauls words to the Romans: we become “a living sacrifice holy and pleasing to God…we discern the will of God and become good, pleasing and perfect.”