Often times we hear the phrase “See something, say something” as a reminder of our responsibility to help protect one another from all sorts of bad thing that can happen.  Well here’s a story that brings new meaning to that phrase and probably could only happen in the bizarre year that 2020 continues to be.   A few weeks ago, a couple found their wedding plans completely upended with the continued fall out from the viral pandemic.   The ceremony in front of family and friends – the lavish reception all had been  revised, then altered, and eventually cancelled due to changing regulations and limitations from the state and city of New York.  The couple decided they just didn’t care anymore, they just wanted to get married.  So they got an officiant to join them on the Brooklyn Bridge at sunset on a Saturday night in July, the bride had her dress on – a rather simple, but obvious wedding gown  – the groom got into a business casual outfit, and they exchanged vows on one of the most iconic landmarks in the city.   It just so happened that this woman who was riding her bike on the bridge crossing from Manhattan to Brooklyn spotted the very intimate moment.  She said she felt compelled to snap a picture on her phone.  Not wanting to interrupt and intrude on them at that special moment, she decided later to post it on twitter with the note “If you were getting married on the Brooklyn Bridge this evening, I’ve got some photos for you.”  Remarkably a few days later the couple were identified and were happily surprised to have what turned into the only pictures, capturing the most important moment, from one of the greatest days in their lives.

Hi everyone here’s my homily for the 21st SUNDAY IN ORDINARY TIME – AUGUST 23, 2020.   Thanks so much for stopping by to read this and even more for sharing it on your Facebook, Twitter, Instagram and everywhere else people share social media posts and your feedback and comments! For the audio version you can get them at SOUNDCLOUD click HERE or from ITUNES as a podcast HERE. Thanks again… I hope you and yours experience all of God’s blessings today and always! In Christ – Father Jim

What are the odds?  The Brooklyn Bridge, particularly at that time of day has a variety of passersby doing all sorts of things.  That this one person was able to stop from her plans, her self-interests and witnessed this couple sharing something incredibly special was uplifting.   At this one providential moment, because this woman did see something, say something (and took a picture in between) it became an international heart-warming story.

Spiritually, scriptures share a similar snap shot with us today – another “See something, say something” moment – but of eternal significance:

Simon, son of Jonah at this point has seen Jesus perform the miracle of the loaves and fishes where thousands are fed – not once but, in the Gospel of Matthew, this has taken place twice within a short period of days.  Simon’s witnessed Jesus miraculously heal the blind, the lame, the crippled… seen Jesus walk on water – been able to walk on water himself for that matter (and then almost drown when Simon begins to doubt Jesus).  The point is – So many things have to be floating in Simon’s heart and mind… trying to take it all in… trying to make sense of it   Simon is excited and in awe, while confused and terrified at the same time.  All that he’s experienced, seen and heard – from the first moment he met Jesus to this very day has caught his attention, and changed his very life – in ways he probably didn’t even realize until this very moment.

Jesus casually talking to his disciples in this private conversation asks “Who do people say that the Son of Man is?” In other words – what’s been the effect of these free abundant meals, these healings, all these miraculous things.   Not surprisingly word on the street is all over the place: they name heroes from their tradition, from their history – trying to put Jesus in a box that they could try to make some sense of… all of which are incorrect…but nice try…

Then Jesus asks the question.  You whom I have called.  You whom I have shared my very life with. You who have heard me teach, preach, care for all those I come into contact with.  You who have witnessed awesome signs and wonders.  You who have enjoyed my friendship.  Who do you say I am.  It kind of just stumbles out of Simon – the impulsive, often times impetuous fisher-man who often speaks and acts without thinking.  But in this moment that’s a good thing:  “You are the Christ, the Son of the Living God.”   It seems like this dramatic, sudden declaration. Simon probably didn’t realize all the things that had been set into motion to get to this revelation.  That actually it wasn’t just a spontaneous utterance – but how Simon had grown into this faith that he now professes. 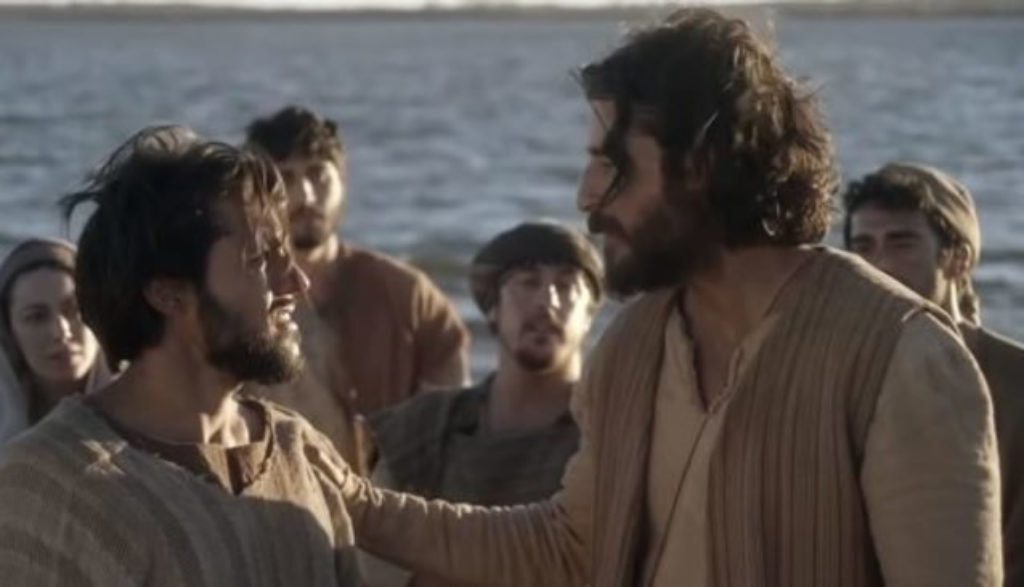 This faith though was only possible as Simon had let go of his plans and his self-interests. The life he knew before meeting Jesus had radically shifted Simon from being a fisherman who would be focused on his business and his family to now following the man who called him on the shore to“fish for men.”  In the time since, Simon had indeed witnessed some incredibly special things.  And now in this providential moment, he too sees something says something that more than likely didn’t realize all that it would mean, all that it will demand, but he sees and says this truth – Jesus – you are more than we ever imagined you to be… you are the Christ, the Son of the Living God.

Jesus sees something and says something too. He already has seen the potential, the promise within Simon and calls him into deeper friendship, an even bigger call as indicated by changing his name as he says … you are Peter – you are the Rock I will build my church upon.   Jesus is revealing that the final battle against sin, against evil that will take place with His death on the Cross on Good Friday that He will be victorious with His resurrection on Easter Sunday – but this spiritual warfare between good and evil, that every soul has to contend with will continue to play out until the end of time.  Jesus’ mission to save all humanity from sin and death is going to need others to continue His ministry of saving these souls from evil, from sin, from death.  He will entrust this divine work to very human humans…  Simon Peter, as the rock, as the leader of that Church will be a portrait of extremes of great cowardice and great bravery, courage and sacrifice.  His very life will testify that the revelation Simon Peter received from the Heavenly Father is the rock of his faith… it will be what reminds him of God’s great mercy when he himself needs it.  It will be the thing he preaches, teaches, offers as he and the apostles are entrusted with binding and loosens things on earth and heaven (as Jesus’ first priests, where they will be able to offer Jesus’ forgiveness and absolution of sins)

For you and I, Jesus asks us who do you say that I am?  It’s more than just having the right answer (which we happen to know since we just heard this story) – but that we too have seen something that we can say something as well.  That we have seen the broken ness of the world, the struggle with sin and evil in our lives that we need something, we need someone to save us.  That we have seen that something that someone is indeed Jesus Christ – and what it is we say doesn’t just mean our being here and the profession of faith we utter from our lips.  More importantly it’s in our lives and actions.  That we go to the Sacrament of Reconciliation, we go to confession knowing that everytime we do that, we are vulnerably lay our brokenness before him, intimately trusting and confidently declaring that Jesus is the Christ, the Son of the Living God.  That we might be a miracle in serving those in need, caring for those who are sick – in all those ways we again testify that Jesus is the Christ the Son of the Living God.

The start to a bride and groom’s new life was captured (and in our virtual, viral world – shared around the world) which proved to be a precious gift for the couple and something that touched countless people around the world because one person did indeed see something and say something.   Over two thousand years later, we remember Simon Peter and knowing the ways his life and the life of the Church was impacted by his doing the same.  What will be our stories?  How we respond to Jesus’ question – Who do you say that I am – has the potential to transform our lives.  How we live that new life,  is how we end up say something about what have seen about the truth of Jesus Christ to a world in desperate need of Him.