In recent weeks, there’s been a lot of discussion about statues.  Around the nation, often times imprudently and without dialogue or discussion – different statues are being unilaterally discarded and destroyed, usually as the result of the demands of an angry mob.  Justifiably angry or not, this is dangerous because for us in Western culture – we don’t look at statues as idols worthy of adoration.  Statues, are pieces of art and often times they are of historic significance to tell a story of people of a certain time and certain place.  That those statues remain allows the generations that follow to pause as they glance at them and to have the humility of recognizing life did exist before us and will likely continue after us… No – we are not the center of the universe or of time itself.  Those realities, hopefully would encourage us to want to learn from history.   Sometimes those lessons are painful, oftentimes they are complicated – but they are all important nonetheless. 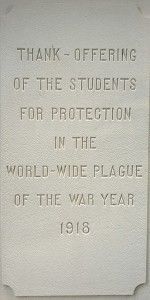 For example, if you visit Creighton University, this Catholic institution in Nebraska you will find a life-sized statue dedicated to the Sacred Heart of Jesus, the feast day we celebrate today.  Interestingly at the base of the statue it reads:  THANK OFFERING OF THE STUDENTS FOR PROTECTION IN THE WORLD-WIDE PLAGUE OF THE WAR YEAR 1918.  Just the verbiage on that is instructive.  “The World-wide Plague” was the “Spanish Flu” (that’s when you could identify an illness based on the place of its origin without being called a racist)   “The War Year” – was the horrific conflict that had yet to be named “World War I” since there had never been such an international battle that encompassed so many different countries, and the prospect of a second one, was a horrific nightmare no one even imagined would take place a few decades later.    Just reading that inscription from a historical perspective you learn things about the students of that day and age:   there was an awareness of these global events that was affecting their daily lives, disturbing their thoughts; these things were frightening, concerning… they were things that were still unfolding, unresolved… that were even undefined.

Yet as fellow Catholics, what’s important for us today is that we could see their witness, & their testimony of faith.   In response to all of those fears, they faced those threats by turning to the Sacred Heart of Jesus.  Praying for His intercession for them; seeking Jesus’ protection; trusting in His love for them…  They erected that statue because they had come to know and experienced the power and truth of the  words in today’s Gospel: “Come to me, all you who labor and are burdened, and I will give you rest.”

No doubt some people who have passed that statue in the decades since have thought “we have modern medicine now, we don’t have to worry about ‘plagues’” or “our world is so much more advanced and interconnected, we won’t ever have to face a time where hatred, violence, destruction and would rise to such a threat.”  Fortunately that statue remained intact.  And those who pass it still and those of us gathered today on this feast will recognize how fragile many of those thoughts and the things that many have placed their trust (even their faith) in have proven to be…

Perhaps all of us can have the humility to turn, once again, to the Sacred Heart of Jesus, who’s love and protection has remained a source of true consolation and healing from generation to generation.