A few years ago, one of the strangest, not to mention tragic, stories made international headlines for good reason.  A 49 year-old Russian woman died from a heart attack that was brought about by the shock of waking up at her own funeral. The poor woman, Fagilyu Mukhametzyanov, was declared deceased by doctors – only to wake up later in a coffin surrounded by sobbing relatives. She started screaming after realizing she was about to be buried alive, only to be rushed back to the hospital where she was declared dead, this time for real.  The devastated husband Faili shared how “her eyes fluttered and we immediately rushed her back to the hospital but she only lived for another 12 minutes.”

Hi everyone here’s my homily for CORPUS CHRISTI (The Most Holy Body and Blood of Christ) – JUNE 14, 2020. During this time of public Masses being suspended, I invite you to pray with us as we pray for you on our FACEBOOK PAGE cick here Thanks so much for stopping by to read this and even more for sharing it on your Facebook, Twitter, Instagram and everywhere else people share social media posts and your feedback and comments! For the audio version you can get them at SOUNDCLOUD click HERE or from ITUNES as a podcast HERE. Thanks again… I hope you and yours experience all of God’s blessings today and always! In Christ – Father Jim

The reality of recognizing the power of what we believe impacting who we are, our relationships to others, how we live and die, is rarely that dramatic.  But perhaps it shouldn’t be.

For Catholics, today we celebrate the feast of Corpus Christi – the most holy Body and Blood of Christ.  We listen to Jesus’ words in the Gospel from John chapter 6 – words that have been studied and prayed with and reflected on for centuries. Words that we can investigate and recognize – Jesus is not speaking in parables or metaphors… he’s not even answering people’s open skepticism, doubts and questioning of this teaching right in front of Him.  These words will, literally and figuratively be fleshed out in the passion, death and resurrection of Jesus Christ – where that Passover meal, that Last Supper, becomes the model for us to follow.  That in the Mass, believers can experience, encounter, receive the crucified, the resurrected body of Jesus Christ in every age and every space outside of those specific historic occurrences.  That Jesus has provided the means for us to most intimately relate to Him by eating His body, drinking His blood under the appearances of bread and wine in this most sacred of meals – with the promise that we heard today in this reading, that doing so will allow us to live forever.

Such boldness – to say that Jesus the man who was born in a manger over 2,000 years ago… preached to crowds, performed miracles, suffered, died – and even more spectacularly – rose from the dead – is as real here and now in the bread and wine consecrated into His Body and Blood in the Eucharist as He was then… that’s a pretty incredible statement and an astonishing belief.

But, some hard truth here – it sure doesn’t feel like that belief has penetrated the hearts of many Catholics in 2020…

Prior to this viral pandemic, some Catholic leaders were shocked to find that a recent poll found nearly 70% of Catholics didn’t believe what Jesus gave us in the Eucharist was His actual body and blood – selecting “a symbol” as their answer to the survey that was conducted.  That shouldn’t have been shocking when we’ve seen the numbers of people attending Mass every Sunday declining for decades, among many other difficult realities, all indicators that bear these survey numbers out… But, even worse, once the pandemic did happen, Catholic leaders seemed to give life to these doubts, this unbelief by allowing what we do here to be defined as “non-essential” – subjecting that shrinking minority who did want to receive this living bread to be isolated and removed from being able to do so, for now nearly 3 months.

I apologize to our Catholic people for this failure and have no answers to the many, many questions regarding all of this. In charity, I can appreciate the physical health concerns we’ve been facing and wanting to be cautious about and safe and help to flatten curves and so forth.   But at the same time, I can’t be silent any longer.  I have not laid down my life as a man – made promises of chastity, obedience, to be dedicated to prayer, to live simply – for some mere symbol.   I did that because I believe Jesus has called me to share in His priesthood, unworthy as I am… to stand in His place at this altar and to offer His very body and blood for the salvation of the world, present tense… and if there’s ever been a moment in our lifetimes, a present tense that needed His salvation, it sure feels like now to me.   So, no, live-streaming Masses is nowhere near an adequate response to the spiritual needs and hungers that people have. This is one of the biggest differences between Catholics and non-Catholics:   the argument that we can encounter Christ in the scriptures and through our service and through our love for one another – yes that’s true… but Jesus is pretty explicit… we’re not just to hug each other, or just be good people.  St. Augustine said in talking about the Eucharist, “Believe what you see, see what you believe and become what you are: the Body of Christ.” So when we say “Amen”, we are saying “Yes! I believe this is the Body and Blood of Christ and that I will be the Body of Christ to others.” 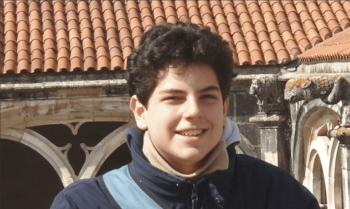 Someone who did that in a pretty remarkable way just about 15 years ago at the mature age of 15 himself was a young man named Carlo Acutis.  Back in 2006, this computer genius used his programming skills to create a website called “the Eucharistic miracles of the world.” The kid at age 14 spent an entire summer researching on his own volition these incredible stories of even more miraculous things surrounding the miracle that takes place at every Mass – primarily because he was struck by the lack of belief of so many with regard to the Eucharist… including his own family.  People used to travel great distances to see Jesus He wondered How come people wait in these long lines for a rock concert and our churches are empty?  His goal was to “shake people’s consciences – say let’s go back to essentials [timely, huh], let’s go back to filling the Churches.” He did this first by managing to drag his relatives, his parents to Mass every day. It was not the other way around; it was not his parents bringing the boy to Mass, but it was he who managed to get himself to Mass and to convince others to receive Communion daily.  Then when Carlo, tragically was diagnosed with Leukemia, he offered up his sufferings for the Pope and before his death in 2006 said, “To always be close to Jesus, that’s my life plan. I’m happy to die because I’ve lived my life without wasting even a minute of it doing things that wouldn’t have pleased God.” I only wish I could say the same.

Pope Francis announced that he was going to beatify Carlo, advancing the young man’s cause for Sainthood back in February. That beatification was supposed to have taken place this spring, but perhaps providentially was delayed because of the pandemic – which has allowed this young mans belief in the Eucharist to become more well known at a perfect time after so many have been deprived of the Body and Blood of Christ, when even more have neglected the Eucharist.  Carlo’s belief can still be appreciated by logging onto his website http://www.miracolieucaristici.org/ – but even more importantly was the effect he had on his family and his friends.

On the other extreme, the husband of that woman who woke up at her own funeral told a reporter: “I am very angry and want answers. She wasn’t dead when they said she was and they could have saved her.” What the doctor’s believed – because they believed she was dead, that belief resulted in a tragedy no one could’ve ever imagined.

As public Masses are set to resume here in New Jersey – and are doing so as well throughout the country and the world – the question many commentators are asking is, “Will people come back?” That’s a sociological question. To me the question is why – why do people want to come back? If these three months of quarantine have done anything, then hopefully they’ve made us more reflective about who we are; what we believe – how those things shape what is most important, most essential to us.   After more signs of death and destruction, more examples of hatred and division then any of us would ever have imagined we’d see and experience in just 4 months – Jesus’ promise to feed us with His flesh so we can live forever is pretty bold, pretty significant, pretty important.  And it can be ours, if we truly believe.