For 6 weeks we’ve been celebrating Easter, a season focusing on this singularly important event of the Resurrection of Jesus Christ from the dead. As we’re nearing the end of this season with today’s celebration of the Ascension of the Lord – when Jesus fully alive in His glorious resurrected body returns to Heaven – the reaction from his apostles is kind of interesting.  These were the 11 (sans Judas, who’s gone for obvious reasons) who have experienced 3 plus years of being with Jesus: they had witnessed the miracles and experienced the excitement and joy of those events; they heard His teaching; prayed with Him; ate with Him … they were more than just friends of His – they had left everything in their lives to be with Him, to follow Him… now it’s 43 days since The Last Supper, the Passion, the Death of Jesus and 40 days since His resurrection and they’ve had numerous encounters and experiences the Risen Christ… After all this, what happened? “When they saw him, they worshiped, but they doubted.” (Matt 28: 17)

Hi everyone here’s my homily for THE ASCENSION OF THE LORD – MAY 24, 2020. During this time of public Masses being suspended, I invite you to pray with us as we pray for you on our FACEBOOK PAGE cick here Thanks so much for stopping by to read this and even more for sharing it on your Facebook, Twitter, Instagram and everywhere else people share social media posts and your feedback and comments! For the audio version you can get them at SOUNDCLOUD click HERE or from ITUNES as a podcast HERE. Thanks again – HAPPY EASTER! I hope you and yours experience all of God’s blessings today and always! In Christ – Father Jim

We often think that doubts are more common, even understandable these millennia that have followed since these things first occurred.  All this time since the eyewitnesses first testified to these event, and in our sometimes arrogant view of ourselves of being more enlightened and sophisticated in our present age – those doubts are almost considered justified.  It’s somewhat jarring to read that right there on Ascension Thursday, for that most innermost circle of followers, believers, leaders of the faith... after all they had seen and heard and experienced… they still doubted.

When we think back through these past 6 weeks of the Easter Season though, – we remember that doubt has been a recurring theme right from the beginning.  On Easter Sunday, the two on the road to Emmaus who upon first hearing the numerous reports of an empty tomb, angelic greetings announcing Jesus being alive – they doubted so much they were heading out of town… Then poor St. Thomas having missed being in the Upper Room Easter Sunday Night when Jesus first appears to the Apostles and says he doesn’t believe the reports from the others, has been forever nicknamed and dubbed “doubting.”

It’s kind of disappointing, or unnerving.  We could understand their doubts on Good Friday – but on Easter, throughout 40 days of Easter Season and now as Jesus ascends into heaven… wouldn’t this good news provide certainty?  Wouldn’t those doubts finally disappear? If they aren’t going to have confidence, certainty – what hope do we?

Maybe this is one of the gifts of this Easter season for all believers: To stop denying our doubts… To not be afraid to acknowledge them.  But to confront them head on.

In an extensive biography on the life and thought of Pope Benedict XVI, the author, Ellio Guerriero shares how when the Pope was in his early 40’s one of the first books he wrote was called Introduction to Christianity. Quite profoundly, right from the outset, the future Pope writes of the reality of doubt in the life of faith, saying “the believer is always threatened with an uncertainty that in moments of temptation can suddenly and unexpectedly cast a piercing light on the fragility of the whole that usually seems so self-evident to him.”   Benedict recounts how some of the greatest of Saints like Therese of Lisieux, who had some of the most profound mystical of experiences here on earth also suffered some of the “worst temptations of atheism.”  (The nuns Therese lived with were so horrified when they read those things in her journals, they had initially edited them out)

He then shares this opening scene from a play called The Satin Slipper. A Jesuit missionary is shown as the survivor of a shipwreck.  The ship having been sunk by pirates has left the priest drifting on a piece of wood through the raging waters of the ocean. Pope Benedict sees this as the situation that each believer finds themselves in – only a wooden beam binds the man to life and to God while all that surrounds him makes him fear that he will wind up like the others in the ship wreck, swallowed up by the great abyss. 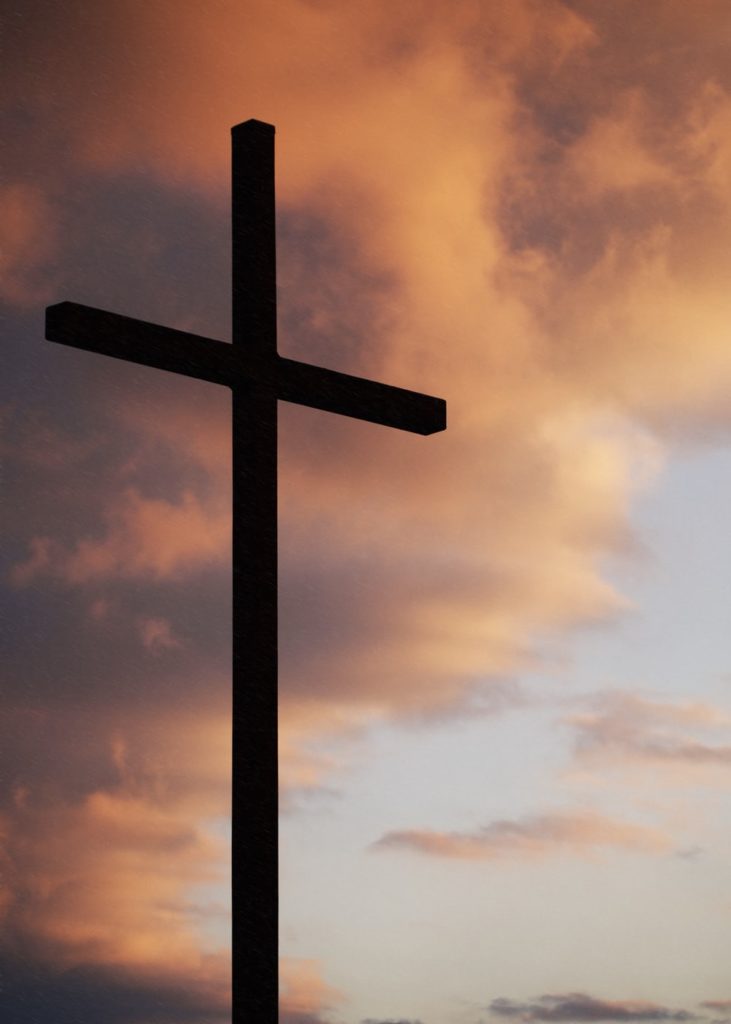 But the believer doesn’t let go of that wood. The believer sees that this wood board is strong enough to keep him from drowning, enough to lead him to safety. The believer recognizes the wood being the wood of the cross.  That cross which seemed to confirm the power and mindset and vision of this world on Good Friday and gave the believer cause for doubt – has been transformed by Easter.  And now the cross is the thing to cling to on each of our voyages of life journeying to the Kingdom of God. But unfortunately for the disciples and for each of us, too often our visions are earthbound…  We can fixate on the predicament, the waters of the abyss around us rather than remembering we aren’t sinking, aren’t drowning and are in fact journeying.

That’s part of the reason the Apostles still doubted. In the first reading, from the Acts of the Apostles, St. Luke describes this same scene of the Ascension but adds more detail. Luke has the 11 asking Jesus if now, finally, are you going to restore the kingdom? After everything they still are thinking that Jesus is going to reunite Israel, get even with the Romans… They’re confused seeing these same leaders, same authorities who had crucified Jesus continue doing what they were doing before. Life hadn’t changed for the Jews or the Romans. Now that Jesus is risen from the dead, they’re waiting for Him to show out, show up, maybe even get even with them.  They still haven’t figured out what exactly the Kingdom of God is… They may have heard Jesus’ words of love, mercy, and forgiveness – but their human, earthly thoughts aren’t satisfied. No wonder they’re filled with doubts.

They will need to let go of that, and welcome His gift of the Holy Spirit (which we’ll celebrate next week with the feast of Pentecost) in order to move forward and embrace Jesus’ vision of the Kingdom. But in order to get there, they have to wrestle with those doubts and make that choice to continue to listen, to remember, to trust in Jesus more than those inner voices of doubt if they are to ever experience that gift.

The same is true for each of us.  Despite our having already received that gift of the Holy Spirit in Baptism and Confirmation – and His continued presence and activity in our lives – the concerns of the world that surround us on our voyage through life remain.  And for us, today, those choppy seas have indeed seemed choppier as of late. There’s more fear, more uncertainty in the world then perhaps at any other time in our lifetimes. People are suffering not just  from illness, but from depression, poverty – and more division then ever. This unjust situation where the people of God have been unable to receive the Sacraments has only caused more suffering and given life to even more doubts.  As we cling to our boards, tempted to let go, the voice of Jesus calls out to us to hold tight, promising us “behold, I am with you always, until the end of the age.”