“God did not do that.” That was the startling and disappointing statement made by the Governor of the State of New York, Andrew Cuomo almost two weeks ago. He was speaking at his briefing on the coronavirus pandemic that have been occurring on a daily basis for weeks now. For the most part, these press events have been full of warnings, grim statistics, and sharing distressing realities – all of which is understandable. New York has sadly, once again, become “ground zero” of another horrific time in our nations history. They are experiencing the gravest impact from this illness (with us here in New Jersey sadly right up there with them).

Hi everyone here’s my homily for THIRD SUNDAY OF EASTER – APRIL 26, 2020. During this time of public Masses being suspended, I invite you to pray with us as we pray for you on our FACEBOOK PAGE cick here Thanks so much for stopping by to read this and even more for sharing it on your Facebook, Twitter, Instagram and everywhere else people share social media posts and your feedback and comments! For the audio version you can get them at SOUNDCLOUD click HERE or from ITUNES as a podcast HERE. Thanks again – HAPPY EASTER! I hope you and yours experience all of God’s blessings today and always! In Christ – Father Jim

On this particular day, about a month into this crisis, it seemed that there was some positive developments. The numbers of people in serious condition along with the number of people being hospitalized started to drop. This was something experts have been telling us to look for as a sign that the curve had been flattened; that perhaps we’ve turned (or are turning) a corner – however you want to put it, to say that things were improving.

Inexplicably though, and without provocation, the governor added: The number is down, because we brought the number down. God did not do that. Faith did not do that… What made this even stranger, it wasn’t like the Governor was responding to a particular question that mentioned, prayer, or faith, or God Himself. It was almost as if he went out of his way to say “don’t get your hopes up, don’t get your faith up…” Can’t help but observe that there are some very vocal people in the media who like to criticize politicians who speak words of faith and prayer in times of crisis as somehow violating the very misunderstood American notion of “separation of Church and state” – but if you want to demean, diminish or dismiss God, the podium is all yours. Sorry, pet peeve…

To be fair, I don’t want to pile on the governor here.   Because it’s been an incredibly stressful time for everyone. And for all of our government leaders (those we supported and those we didn’t) they are trying their best under incredibly unique and difficult circumstances. And every move, every decision is being debated in real-time online – and we’re dealing with matters of life and death – so it is a sobering and challenging time.   So I’m not here to rip on Governor Cuomo. But I have to admit that I was extremely sad to hear this statement coming from him. Because Governor Cuomo has made mention, at least in passing, to his Catholic Christian faith and upbringing. Listening to these comments, “God did not do that” just as an observer, it sounds like either the governor doesn’t really know God or is angry, disappointed or disillusioned in Him.

Because what moves a person to caring for someone in need? Like the story I read in the paper of a fourteen year old in New York City who made flyers and stuck them under the doors of many of her neighbors in her apartment building. She specifically wrote to senior citizens -most of whom she had lived next to her whole life but never knew their names – who might be living alone… saying that if they needed anything, even just someone to talk to, she gave them her name and phone number. Or

How does a person summon the strength to go beyond what seems humanly and physically possible? As we hear stories of doctors, and nurses, and the staffs at hospitals who are working crazy hours day after day, week after week, simply because they see the needs are so great. Or 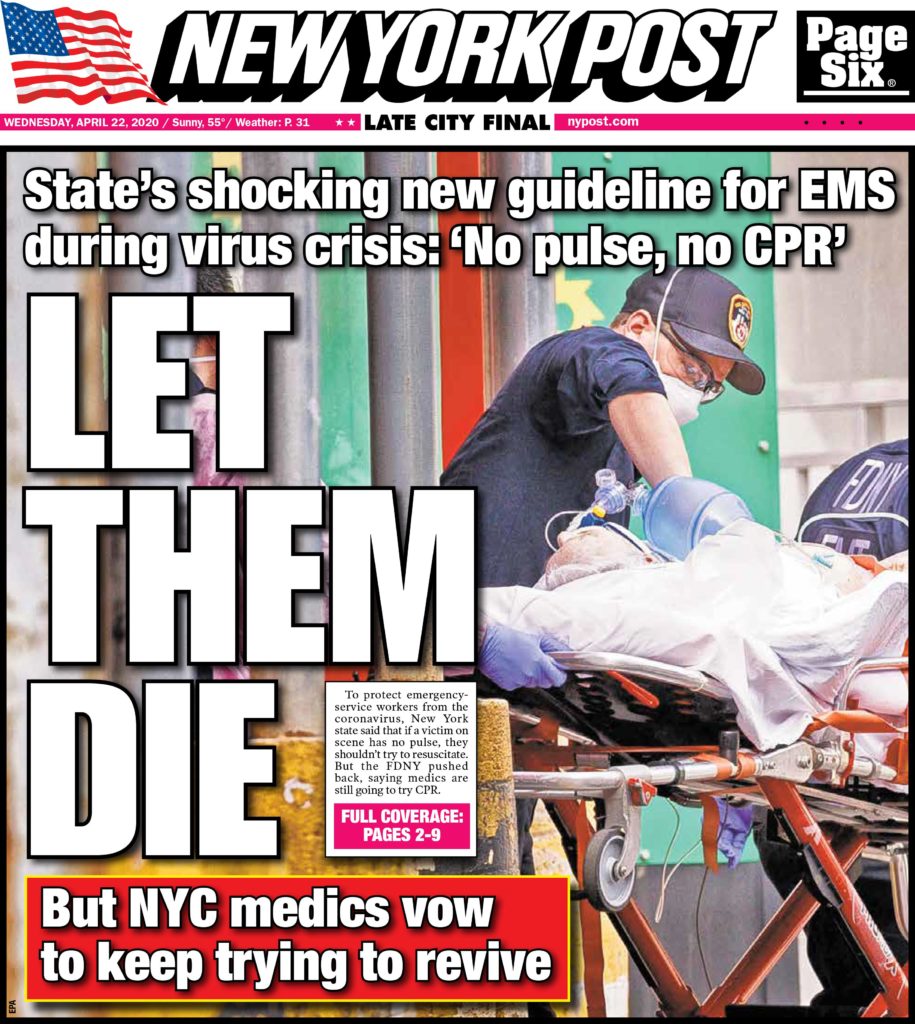 Why would someone risk their very lives to care for a stranger? This past Thursday, members of the FDNY once again prove their bravery and heroism as it was reported that despite receiving mandates that said ‘no pulse, no cpr’ – that many are ignoring that order as they vow to do whatever they can to save these individuals who they’ve been summoned to help… as they always have done before the viral pandemic.

We know what causes that young girl to care.

We know how it’s possible for a person to go beyond their natural, human abilities.

We know why someone risks their lives for another.

As Catholic Christians, we know that in the Passion, Death and Resurrection of Jesus Christ – the fullness of who God is has been revealed. He is not a Master looking at us as mere subjects. He is not some distant, disinterested God who threw creation into existence and then said “good luck with all that.” No – in the Passion, Death and Resurrection of Jesus Christ, we see, we know, that we have a God who is selfless, sacrificial love. That is who God is. And as His creatures, made and formed in his very likeness and image – that’s already there, that’s inside of us… that’s part of our make up, it’s part of our DNA. Whether we’re the most devout or the most oblivious to Him.

We can and often do choose to go against that part of ourselves. But He wants us to become the most devout… He desires for each and everyone of us to come to know Him – to respond to that identity that’s there, to live in the newness and fullness of life as members of the body of Christ, risen from the dead. That’s what the disciples on the Road to Emmaus come to realize [today’s readings can be found here]. As there journey begins, their minds, their hearts, – they are stuck on Good Friday. Understandably they’ve been traumatized by those events. So all they can think of is death and destruction – the seeming end of all hope. It’s so bad that , these disciples who also had encountered God Himself in Jesus Christ – either they didn’t really know who He was, or maybe they were angry, disappointed or disillusioned in God themselves. Because here it was, Easter Sunday… they had just heard several reports from differing witnesses that Jesus had risen from the dead and their response to this great news is to leave town, leave there fellow disciples. Whether it was out of fear, confusion or disbelief doesn’t really matter.   Because in a real way they are almost saying “God did not do that.”

To that, the Risen, but somewhat hidden Jesus says “Oh how foolish you are!” “How slow of heart you are to believe…” as He patiently and lovingly walks with them and talks them through it all… He spends time re-orienting the disciples minds and hearts to remember, to recall all that God in fact had done – from the very beginning of time… Those stories of faith begin to reignite their hearts. Jesus stays with them and took bread,/ said the blessing/ broke it / and gave it to them. And that changes everything for them. They recognize Jesus and what   in fact God  had done.

For us as Catholics, we know that the acts of “taking, blessing, breaking and giving” are the Eucharist. As alive as Jesus was that first Christmas in Bethlehem, as active as Jesus was in Cana at the wedding where he turns water into wine, as present as Jesus was to the disciples before His death and resurrection – so He is now, in a new way in the Eucharist. It is in participating in the Eucharist, it is in our nourishing of ourselves on this Bread of Life that we come to know Jesus… we share in and experience His very life ourselves.

As people of faith, living in these difficult, unprecedented times, it’s understandable that we’re fearful, we’re worried. We’ve experienced death and destruction, we’re feeling isolated from one another – and so many not able to receive Jesus in the Eucharist as attending Mass has been prohibited, has people feeling isolated from God as well. All of those very cold, harsh realities have the potential for us to hear the good news of Jesus’ resurrection and allow these present realities to fuel doubts which overwhelm that truth. We too might feel like we don’t know God or feel angry, disappointed, disillusioned with Him.

That we’re here today though means there’s a part of us somewhere deep within that knows who we are… that remembers that there were, that there are countless blessings, countless miracles from our loving Father that we have and still are experiencing. Jesus is trying to get our hearts burning within us, and to recognize He is alive and He is with us – right here, right now.

It’s with that vision that we are able to know and must speak words to ourselves, testify to one another, to Governor Cuomo, to any and everyone, to the very ends of the world, in fact, what God did, and what God does for us.

GIVING UP THE YANKEES

FAKE IT TILL YOU MAKE…

THE DIFFERENCE ONE DEGREE MAKES

IF YOU CAN SEE HER,…