Over the last few weeks, as this thing went from social distancing, to pretty much being quarantined or under house arrest, to recognizing that this was going to be a really weird Easter – I mean up until now, the strangest thing in my (soon to be) 21-years of being a priest was snow on Easter – this easily surpasses that . . . well, this A.D.D. brain has gone off in a whole wide variety of thoughts and directions.  But one thing that was recurring, that kept coming back to me, was thinking about Dr. Seuss’ character “The Grinch” and the cartoon episode in which the Grinch tried to ‘steal’ Christmas from the Who’s of Whoville.

Hi everyone here’s my homily for EASTER SUNDAY OF THE RESURRECTION OF THE LORD – APRIL 12, 2020. During this time of public Masses being suspended, I invite you to pray with us as we pray for you on our FACEBOOK PAGE cick here    Thanks so much for stopping by to read this and even more for sharing it on your Facebook, Twitter, Instagram and everywhere else people share social media posts and your feedback and comments! For the audio version you can get them at SOUNDCLOUD click HERE or from ITUNES as a podcast HERE. Thanks again – HAPPY EASTER!  I hope you and yours experience all of God’s blessings today and always! In Christ – Father Jim

The memories of that cartoon special, with the voice of Boris Karloff as the Grinch, kept coming to mind. Fortunately, in our digital age, we don’t have to wait until November for a television network to air it, or even have to drive to Blockbuster to get it to watch it now (for some of my beloved students watching right now, Blockbuster was a video store that you used to have to go drive to and rent movies from on these video cassettes). You can watch the original right now just going online and renting it for $4 on youtube (for some of my beloved students, that’s the non-illegal way to watch things online) 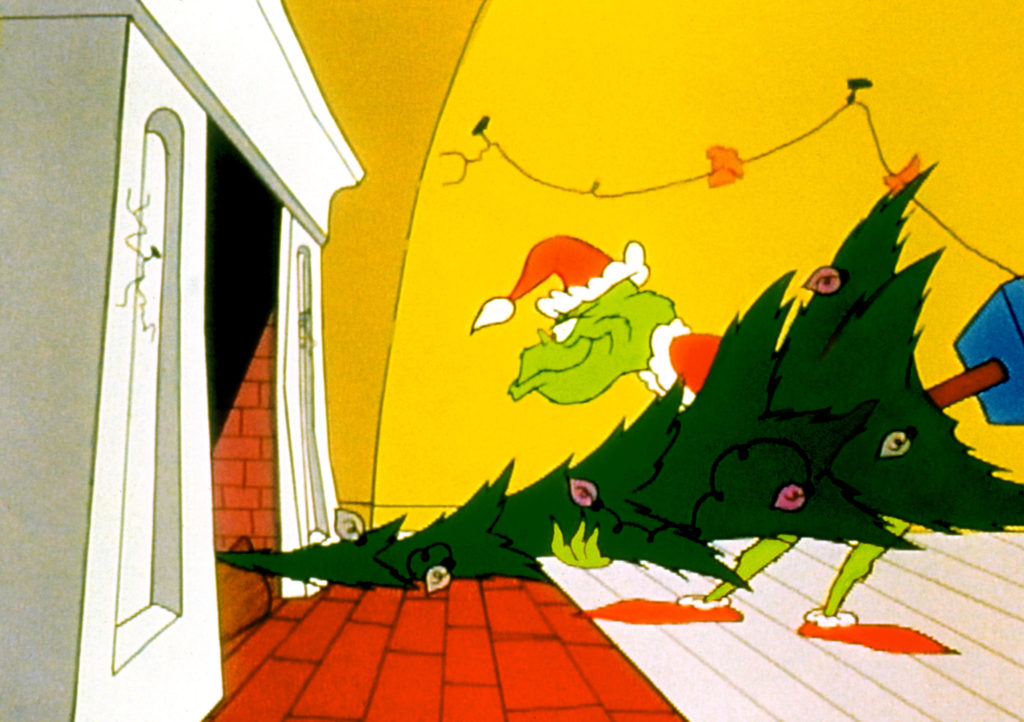 Anyway – a refresher for those who need it. The Grinch hates just about everyone and everything. So all the preparations for Christmas – adults going about buying toys, or as the good doctor put it, “Snoof and their tringlers and fuzzles, their pantookas, their dafflers and wuzzles” – as the whole village of Who’s decorate everything with trees and wreaths, as dinner preparations go into overdrive to cook the roast beast – the joy of everyone preparing for Christmas infuriates the already clinically depressed, narcissist that is the Grinch. So he sets about in the middle of the night on Christmas Eve – as all the Who’s are sound asleep (and, gosh, I wish I could live in a town where everyone is able to sleep like that!) sneak in dressed as “Santy Claus” and proceeds to steal everything: the presents, the trees and wreaths, even the roast beast. The Grinch figures that this will ruin Christmas – rendering the Who’s miserable . . . the Grinch obviously is a firm believer that misery does in fact love company.

Whoville may be fiction . . . but a virus from Wuhan as we’ve come to learn is obviously very real.

And probably for great numbers of people this Easter morning, this coronavirus seems to have been far more successful than the Grinch could ever have imagined in his most diabolical of schemes.  The Easter Bunny had to file for unemployment this year . . . The Easter egg hunt that would have kids decked out in their new Easter outfits (which they quickly mess up in their competition to find the most eggs) has been cancelled.  Family dinners have been sidelined with, at best, arranging a Zoom or Facetime gathering.

Add to all of this the fact that our churches have been shuttered – not only have most of the faithful been deprived of the sacraments which are so life-giving and essential to our souls, but people have been forbidden from even entering our sacred spaces . . . during this most sacred of times and even today, Easter, the most important day on the Christian calendar. While we, as people of faith, enjoy eating some marshmallow peeps, Cadbury cream eggs, and jelly beans like the rest of the world – we, who know the true meaning of Easter that goes far deeper than all those trappings,  not being able to celebrate the sacraments together, not being able to receive Jesus’ Body and Blood – brings an unprecedented suffering to us. It’s hard for us to say ‘Happy Easter’ with the true joy we normally do on this day.

In keeping with things being out of sorts and out of routine, this is the first year I can remember proclaiming this particular Gospel passage on Easter Sunday.  The Church gives priests the option, out of a few possibilities, to pick which Gospel reading they want to use. And probably every year, because I was involved in one way or another with the Easter Vigil option, I’ve always stuck with that reading. But knowing there wasn’t going to be an Easter Vigil here, I just turned to the one prescribed for the day. And I was struck by how appropriate it was.  Particularly as John sets the scene for us with the words, “While it was still dark . . .” 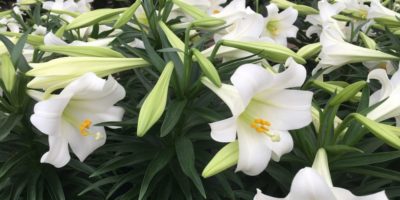 Easter happened while it was still dark. The enormity of the Resurrection needs to first be realized in the hearts of the believers . . . it needs to first be seen with the eyes of faith.  Because, unlike the Gospel account from Matthew, which includes awesome sights, sounds and beyond-miraculous encounters, St. John doesn’t have any of those details in his account of Easter morning.  We heard that Mary Magdalene, Peter, and John all encounter the empty tomb. They see the stone rolled back, they see the burial cloths rolled up – but there’s no earthquakes, no angels, and not even the Risen Jesus.   Mary Magdalene saw the stone removed . . . Peter and John race to the tomb at her news. John tells us that he saw and believed. But then quickly adds they did not yet understand.

Easter happened while it was still dark . . . the first of Jesus’ followers were still engulfed in sadness, reeling from the betrayals and failures on their parts, overwhelmed with fear and anxiety. And encountering this empty tomb has completely disoriented them.

While it was still dark – the world completely changed.

While it was still dark – the dreams in the hearts of Jesus’ followers, dreams which seemed lost forever in the brutality of Good Friday, are actualized.

While it was still dark – while it still looked as if death had the last word, God’s word, His love, His life destroyed death.

The same remains true today. There’s no shortage of people who feel they are in a dark time and a dark place. There’s no shortage of reasons to validate those feelings.  Yet, Easter still comes . . . Despite the locked churches and cancelled celebrations. Despite the social distance, the isolation that we’re experiencing in unprecedented ways . . . do we welcome, do we sense, do we believe in Easter?

What makes the characters from Dr. Seuss – the Who’s of Whoville – so beloved is that, in the end, they welcomed Christmas without their presents, decorations or traditions – which startles the Grinch as he “thought of something he hadn’t before! What if Christmas, he thought, doesn’t come from a store. What if Christmas . . . perhaps . . . means a little bit more!” Without explicitly articulating the birth of Christ, through the eyes of us believers, we could recognize the truth and joyfully celebrate this realization the Grinch stumbles upon: the message that Christmas is bigger than gifts, decorations, and celebrations.

For us today, the challenge is far greater than to just turn away from the commercialism that often obscures Christmas. It’s more challenging because the importance of this day, Easter, is far greater than that of Christmas – for if Jesus hadn’t risen from the dead, we wouldn’t care about Him or remember, let alone celebrate, His birth.   But because He has risen from the dead, that good news, that great news has to move us. For Mary Magdalene, Peter, and John, Easter started in the dark, but it didn’t remain there – and neither did they. They returned to share that good news with their fellow disciples . . . and as they did, they encountered, they experienced the Risen Christ for themselves. We need to summon that truth – believe it – share it . . . We have to allow Christ’s victory over all the forces of death and destruction to work in us, here and now. Happy Easter.