“The end is near.” That was one of the headlines that was trending back in January. Which was a pleasant way to enter the new year, and the new decade… The story explained how what is called “the doomsday clock” had been updated to the latest calculation according to a group of atomic scientists who now said it was 100 seconds till midnight. What’s midnight? The end of humanity. Happy New Year.

Hi everyone here’s my homily for MARCH 8, 2020- SECOND SUNDAY OF LENT. Thanks so much for stopping by to read this and even ore for sharing it on your Facebook, Twitter, Instagram and everywhere else people share social media posts and your feedback and comments! For the audio version you can get them at SOUNDCLOUD click HERE or from ITUNES as a podcast HERE. Thanks again – I hope you and yours experience all of God’s blessings today and always! In Christ – Father Jim

When I first saw the story, at first I thought it was “click bait” – an outrageous, hysterical headline designed to get people to click their story. Then I saw it was being reported by The New York Times, CNN – (I still thought it was click bait, but felt I should at least check it out). When I saw the image of “the doomsday clock” it looked kind of familiar… Thought to myself hadn’t I heard this story before?  I had… as have my parents and my grandparents. It turns out this “clock” has been around since 1947. It originated by some of the scientists who had helped create the atomic bomb. After the bombings in Hiroshima and Nagosaki, they were observing the different crises, potential power struggles that were popping up all around the world and at that point had pegged the time of 7 minutes till midnight. This past January’s update was considered “historic” – in that they decided to express how perilous everything is by putting it in seconds rather than minutes.  The last updates, in 2018 had moved up human annihilation to 2 minutes (with the two previous updates having been 2 and a half minutes in 2017 and 3 minutes in 2016)

“It is 100 seconds to midnight,” Rachel Bronson, president and CEO of the Bulletin of the Atomic Scientists proclaimed “We are now expressing how close the world is to catastrophe in seconds — not hours, or even minutes. It is the closest to Doomsday we have ever been in the history of the Doomsday Clock. We now face a true emergency — an absolutely unacceptable state of world affairs that has eliminated any margin for error or further delay.”

If you missed that news, or forgot it, no doubt you’ve had your share of panic, fear, hysteria that all had similar messages about “the end coming.” If it’s not nuclear war; then it’s a viral pandemic (remember in October we were told this was the worst, most dangerous and earliest flu season in history and we better get our flu shots?)… if it’s not a viral pandemic – then it’s something weather related (back in November, we were warned this would be one of the coldest and snowiest of winters in recent memory)

I’m not trying to be dismissive of serious matters. We need to be attentive and prepared – and while the world would mock the suggestion, I think we really need to pray when faced with these different challenges. We need to take reasonable precautions. So yes, I got my flu shot, and I’m using hand sanitizer so much I had a student ask me why Jesus tastes like Aloe Vera after giving communion out this past week… But I can’t help but notice and wonder how many people are allowing themselves to give into despair, anxiety and depression by listening to these voices speaking words of fear, words of panic, words of death and destruction. Last week, students at one of our local campuses were saying that they heard the University might cancel the rest of the academic semester because of current fears over the corona-virus (I’m thinking that is wishful thinking on the part of my beloved students who are frustrated they haven’t had a single snow day yet, but we shall see – fear and hysteria seem to be the most contagious thing).

The point is, we receive an avalanche of negative news on a pretty regular basis. And the reaction that we see from the somewhat common over reactions like people buying out toilet paper at Costco to the ridiculous like people afraid of drinking Corona beer demonstrate how these voices are causing people to act irrationally… people are losing their heads and worse yet, their vision – of who they are and whose they are.

Today’s scriptures, particularly the First Reading from Genesis and the Gospel are providential for us to hear. They are simple but necessary reminders of listening to God. Not ignoring the common sense precautions but not letting that distract us from paying attention to His direction for everything. Not letting the fears, real or imagined (or manufactured) to take root in us, but rather allowing Him to speak his blessings over us.

In the first reading, we hear the beginning of the story of Abraham, our great father in faith – when he was still Abram and received his call from God… and in the Gospel, we heard St. Matthew’s account of Jesus’ transfiguration. For both Abraham and Jesus when these events were happening, things were less than ideal in the world around them.   There was more than enough news to depress and lead people to despair in their own lives just as it was doing for everyone else. Abram was 75 years old… childless – seemingly hopeless of having a legacy for himself and his wife – and living in a world that post Eden, post- Adam and Eve had become a lonely wilderness of disobedience, The people had experienced widespread loss and alienation.

Jesus right before the transfiguration had told his closest friends what was awaiting him in Jerusalem: the shame, the horror of the Passion, the Cross, His death. This coming from Jesus the one who had been their only hope as Jews who were sickened and scandalized by how unfaithful their religious leaders had become as they were for all intents and purposes been enslaved by the Romans. God’s chosen people who’s greatest of miracles had been being freed from slavery from Egypt in the Exodus, because of their unfaithfulness were once again in this perilous situation. And because the Jewish leaders were so corrupt, their hopes were weaning. Jesus had reignited them to remember God’s promise to never abandon them. Their dreams of Him being the Messiah had reawakened those memories, those promises. Now He’s preparing them for something earth shattering in talking about the Cross. 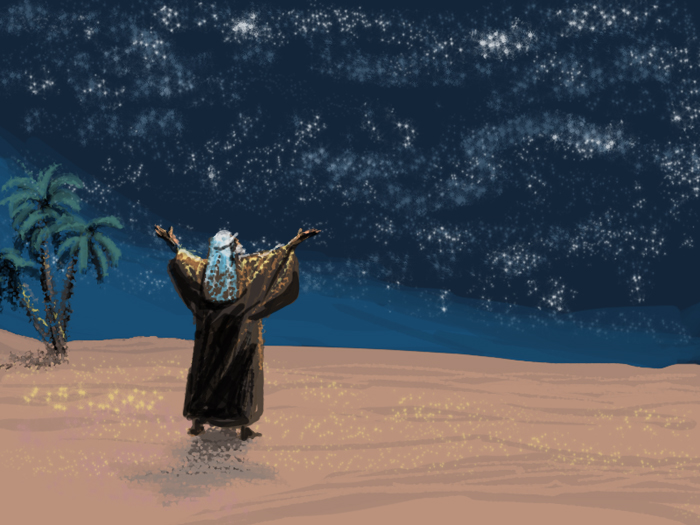 look at what happens in both cases: God is faithful. God is loving. God speaks out inviting people to Listen to Him. First to Abraham. Abraham… calling him to obey, calling him to trust in the Lord. When he does – the seemingly impossible is made spectacularly real in a way that surpasses Abraham’s grandest of hopes. The Childless couple will see Abraham become not just a biological father, but the father to countless numbers. His obedience will begin to restore the chaos that disobedience and sin had unleashed. They will have a new identity. No longer will they be seen as the lost, faithless – no they will be called a “great nation” – who are blessed by God. All by Abraham’s decision to heed God’s invitation to Listen to Him.

In the Gospel, the Father’s voice once again invites people to Listen to Him in an even more historic way that will move the world further away from sin and scandal and towards God’s vision being restored and fulfilled. Peter, James and John who are overwhelmed with both excitement and panic at the sights and sounds on the mountaintop with this transfiguration – are told, as are we, that in Listening to Jesus, who the Father calls His beloved Son – we find a greater dignity than Abraham and our ancestors ever imagined. More than just a great nation – in obedience to Christ, we too are beloved Sons and Daughters of a loving Father. We receive the fullness of the promises, the blessings first made to Abraham.

That didn’t change the present situations that either one of these men faced in the short term. Abraham and the apostles will still have to move forward. They for the most part don’t know the way they will go, yes they will encountering dangers, pain, fears that would tempt them back into despair or worry… tempt them to listen to other voices wanting them to obsess at the realities in their faces rather than the promises of God. But ultimately they found themselves choosing to remember their encounters, recall His voice and chose to Listen to Him. It was that obedience and faithfulness that enables them not only to face those temporal realities but even more to see God’s promises fulfilled in ways never seen before.

The same remains true for us today. Last Sunday Jesus reminded us that Satan is constantly looking to tempt us in countless ways all with the aim of turning our attention away from God, forgetting His presence and His action among us. And if we’re honest, we can all write books on how many ways we’re tempted to do just that – both in our personal lives, or even by paying attention to everyone of our modern devices transmitting words of fear and panic which – thanks be to God, constantly prove to be consistently overblown. St. Padre Pio famously said “Pray, hope, and don’t worry. Worry is useless. God is merciful and will hear your prayer.” On this Second Sunday of Lent, God invites us to do just that – Listen to Him – promising to be our comforter, our healer, our redeemer. Listen to Him calling us not to pitch our tents in the wilderness but follow His directions to the promised land, citizens of His great nation. Listen to Him remind us Jesus is His beloved Son – and by our listening and following Him, we too are beloved Sons and Daughters of a Father – who promises that whatever “doomsday” prediction promising the “end” that we face, we have nothing to fear knowing He has never and will never abandon us.