Back in 2005, a man named Jameel McGee was living in Benton Harbor Michigan. According to him, he was simply minding his business when Police Officer Andrew Collins accused him – and arrested him for dealing drugs. McGee who claimed, as many accused men do, that “it was all made up” eventually was sentenced to prison losing everything that mattered in life to him as he was incarcerated for over four years. Throughout that time, he was fixated on getting out one day and getting some revenge on the cop who locked him up: “My only goal was to seek him when I got home and to hurt him”, McGee said.

Hi everyone here’s my homily for February 23, 2020- SEVENTH SUNDAY IN ORDINARY TIME. Thanks so much for stopping by to read this and even ore for sharing it on your Facebook, Twitter, Instagram and everywhere else people share social media posts and your feedback and comments! For the audio version you can get them at SOUNDCLOUD click HERE or from ITUNES as a podcast HERE. Thanks again – I hope you and yours experience all of God’s blessings today and always! In Christ – Father Jim

It turns out, Officer Collins was a crooked cop. After an internal investigation, the department discovered that he had indeed falsified reports, even planted evidence in some cases, including McGee’s. Collins lost his job and eventually was sent to jail for a year and a half. A horrible story. In this day and age where so many good police officers have been tainted by the actions of a few – where there’s so much division and tension among different groups of people and races – this seems perfectly suited to throw another Duraflame log on an already raging fire of anger, distrust, hatred even.

When we think of injustices that we see in the world… When we think of wrongs that we’ve experienced in our own lives… this Gospel seems completely unreasonable to us. We might want to go so far as to say Jesus, we like the whole turning water into wine thing… Really neat trick… Or those healing stories – awesome – great – those we can all get on board with – but this? Let someone who strikes me on the right cheek smack me again… Give someone who’s taking my tunic my cloak as well?   Love our enemies?   It’s too much It seems so unreasonable – so unfair. At a very minimum we demand justice – All of a sudden we become fans of the Old Testament – what was wrong with an eye for an eye; a tooth for a tooth? Or “loving our neighbors and hating our enemies?”

But Jesus is pretty definitive about this. He’s not so interested in the fact that we as humans can become attached to things that can be broken or stolen that can be replaced.   He’s not interested in our vision – our very limited vision – of people’s hearts and motives that cannot begin to comprehend the complexity of even our worst enemies motives. He knows that as His Father’s most prized possession – you and I are God’s most prized, precious creation – how bruised and wounded we are through the evil done by others and that our anger, our thirst not simply for justice but retribution can easily turn a loving heart into something quite different. That’s what it means when it is said that – Jesus has come to save us –

He’s come to save us from Sin and Death…

He’s come to save us from the evil that is done to us.

He’s come to save us from the evil that we can become as well.

Because the reality is that potential is all too real for each and everyone of us. The hurts and pains we’ve endured at the hands of others… The anger over the lack of justice whether it’s on some global scale or things happening right in our own lives which could all be legitimate things to be angry about – all of that can change us. And by giving into those feelings, we become what we hate… we allow the thing that has hurt us and inflicted pain on us to be the thing we go to as a source of justice.   The Devil is clever, isn’t he? 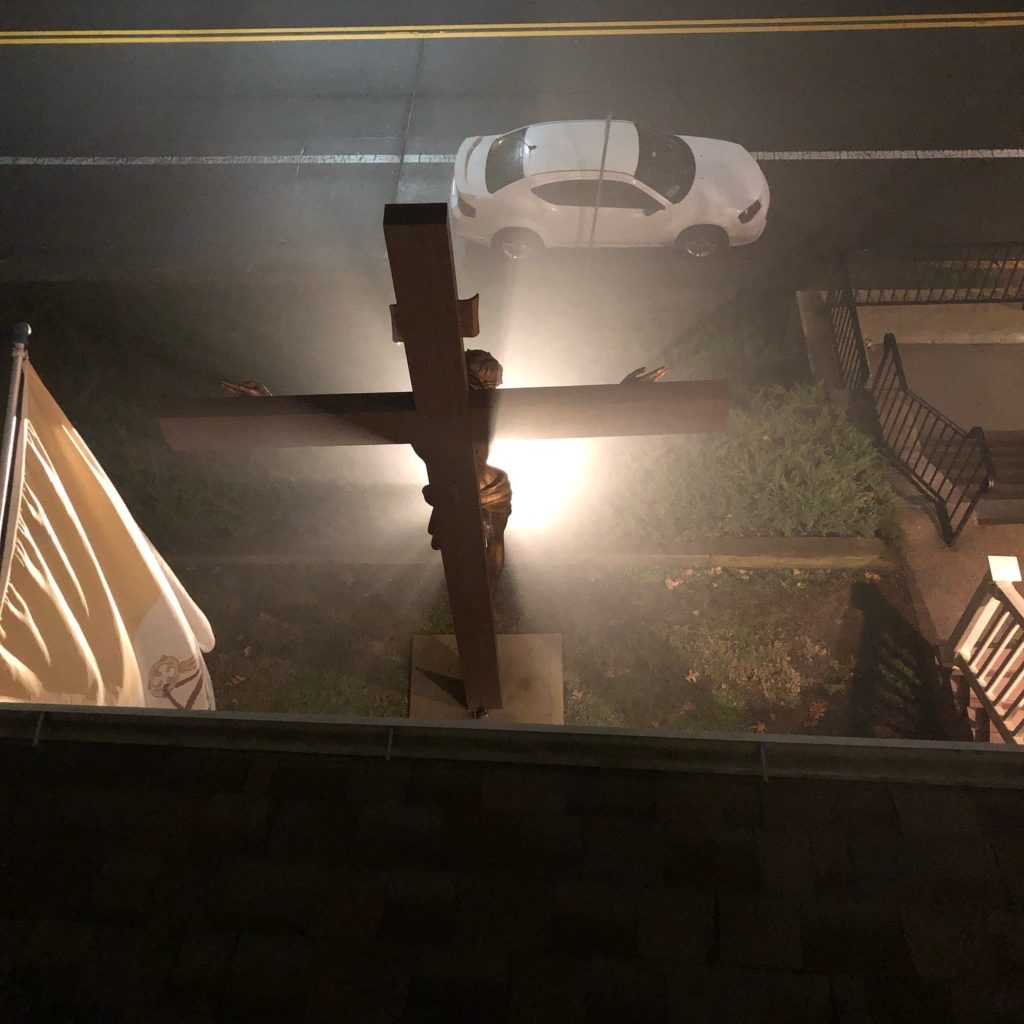 It’s important to realize though, that Jesus isn’t simply spouting off trite sayings for us to follow when we are faced with trials and struggles. He’s giving us a preview of how He himself will deal with it. How he will endure beatings, how his clothes will be stripped of him and gambled away, how as he lays dying on the cross he will pray “Father forgive them…” In this, Jesus showed that there was nothing, nothing that the darkest, evilest of hearts could perpetrate on him that he would not endure. Knowing that by withholding even the slightest of remarks, resisting staging the meekest of defenses in an arena of such cruelty and injustice would thousands and thousands of years later still confound and move us his followers.

We still marvel at that strength displayed in such seeming weakness.

We are at a loss to comprehend the most bloodless response ever mounted to such an attack.

We cannot deny how it unveiled the greatest victory that has ever taken place in human history in Jesus rising from the dead, destroying death forever.

That doesn’t mean we’re to be punching bags to the abuse of others. Allowing an abusive husband or wife to continue unabated as we “turn the other cheek” – pointing out to a robber ransacking our homes “don’t forget the laptop in my office” all of that would simply enable our disturbed brothers and sisters who are doing these terrible things to continue unchecked, unapologetic – and further endangering their souls. Protecting ourselves, our loved ones – and loving the other to call light to the ways of darkness they’ve embraced isn’t violating what Jesus is saying here.   At the core though, Jesus is sensitive to the fact that our longing for “justice” can easily blind us into rage and anger which makes these bad situations worse. Where justice dwarfs simply into revenge.

Which brings that horrible story of the innocent man sent to jail by a crooked cop back to mind. It would be hard for us not to argue that McGee the guy who lost 4 years of his life deserves, at the very least, to have a few minutes alone with Collins, the man who set him up. It was something that McGee had wanted during those 4 years of hell as he sat in a prison cell – to simply have an opportunity to “get home and hurt him.”   Even reading the story -my initial reaction was – wait, the innocent guy served 4 years for something he didn’t do and the crooked cop only got a year and a half? Doesn’t he deserve at least the same length of time as the guy he set up?   So even I still struggle with what Jesus is asking us to do… 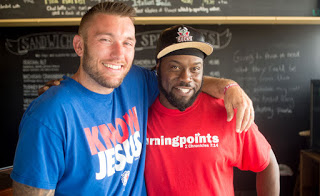 By sheer coincidence, or rather divine providence – the two men found themselves face to face – or rather, working, side by side at a coffee house blocks away from where their lives first intersected.   They had both gotten employed by the “Mosaic Coffee House” and as CBS news reported, in these close quarters, they had no choice but to “have it out.” Collins just went to McGee and said “Honestly, I have no explanation, all I can do is say ‘I’m Sorry.’”   McGee said “That was pretty much what I needed to hear.” The story goes on to say that as time went on, they’re not only cordial, they’re friends. Such close friends, not long ago McGee actually told Collins he loved him. To which Collins said “… I just started weeping because he doesn’t owe me that. I don’t deserve that.”

That’s the power of sincere, genuine love – that’s what forgiveness is able to unleash.

Jesus knows all too well how hard this is for us to consider possible. And we have to remember that for McGee and Collins, this was an evolution of over 11 years.   McGee shared that it was his Christian faith that made this possible. Adding that he didn’t forgive, or love Collins for his own sake, or Collins sake – but for our sake – for all of mankind.     What Jameel McGee illustrates is that all of this is possible – for you and me. It is possible to stop returning hate for hate… It is possible not to let feelings of hurt and anger to continue a slow burn within. It is possible to experience reconciliation with that loved one, that co worker, that neighbor, that friend who we’ve written off. It is possible not to continue facebook or twitter wars over whatever political or social debate is trending today. All of this is possible if we’re in relationship with Jesus Christ. If we know, feel, experience that loving embrace of Christ then we can recognize how he is the only thing that ultimately matters.

Then we won’t have room in our hearts for anger because we’ve allowed Jesus to abide there. And with that intimacy, we will authentically and sincerely find true peace, lasting joy; the ability to forgive and yes, even love our enemies.