Despite some women’s speculation that men don’t put a lot of thought into Valentine’s Day as much as they do, my unofficial survey based on having to make a bunch of stops on Friday would argue against that premise. Men do think about it actually a lot. Whether they end up doing anything or not is an entirely different issue. A bunch of guys at the Barber Shop were arguing whether if celebrating his wife’s birthday on February 13th excused him from having to do something on the 14th. When asked for my opinion as a celibate, unmarried man and I said “I don’t think it’s wise” He snapped and told me how much he spent on a bracelet. I said that’s a lot of money – but if I had to guess, just something small like some flowers or something – he couldn’t go wrong with that. His response “you’re a priest, what do you know?”   Another guy was talking about how it would be easier to go out on the 15th, that everyone jacks the prices up, its hard to get reservations on Valentines Day and it’s just something Hallmark made up anyway – but then he started doubting himself wondering if going home empty handed with plans to go out on the 15th would suffice or would that get him in trouble or not. Even among college students, it was interesting to hear among my beloved students who was doing what… The one guy I asked if he was going to be romantic and “swipe” his girlfriend’s meal in the cafeteria that night. He promised he had some better plans than that.   I ended up sharing with a few students the story of the last Valentine’s Day that was of major consequence for me when I was in college. My girlfriend at the time was a classmate of mine who we had been dating for about 3 months (but we had been friends for about a year and a half) Anyway, I knew that she always loved the music from the musical Jesus Christ Superstar and that she had never been to a live theatre production- so when I saw that there was a Broadway production of it touring in Philadelphia (which was about an hour away from where we went to school) and that it was going to be there on Valentines Day, I thought that would be perfect!

Hi everyone here’s my homily for February 16, 2020- SIXTH SUNDAY IN ORDINARY TIME. Thanks so much for stopping by to read this and even ore for sharing it on your Facebook, Twitter, Instagram and everywhere else people share social media posts and your feedback and comments! For the audio version you can get them at SOUNDCLOUD click HERE or from ITUNES as a podcast HERE. Thanks again – I hope you and yours experience all of God’s blessings today and always!  In Christ – Father Jim

$50 a ticket mind you – it’s a lot now, yeah, well back in 1993 and being a poor college student myself – it was a heck of a lot more! I share that not to complain, but as a preface to this next part that, in the light of the 27 years since I might understand a little better why the night didn’t go as well as I had imagined. After $100 on tickets, and knowing the parking, gas, etc was going to be another 30-40 bucks, well I was more than financially tapped out and I just hadn’t planned every detail correctly. So as we’re driving around 5:30/6:00 that evening to the theatre, I realized something important:   I was kind of hungry… so I asked my Valentine “Are you hungry?” She said that she was, so being the gentleman I was, I asked her if she had a preference to stop at Burger King or McDonalds. Despite my friends who mocked me later about this, I did not purchase her a “Happy Meal.” She had a Big Mac value meal (which I told the woman behind the counter to ‘super-size’ – since it was on me – I know how to treat a lady… I was even willing to splurge on an apple pie, which she had turned down)

Anyway, the show was great, very well done… and I thought that she enjoyed it all, but it wasn’t long after that we broke up. In the ensuing discussion one of the reasons “this isn’t working” was directly related to this date. Which, ladies, just an F.Y.I. – when you’re breaking up with a guy, telling him he just wasted about $150 on a date night isn’t the most sensitive thing to do…   I remember her saying “ I did enjoy the evening, but I’m sorry if I don’t find McDonalds for dinner followed by watching Jesus get crucified set to rock music the most romantic thing I would’ve imagined.” The next fall I entered the seminary. (Kidding, it was 2 years later…) 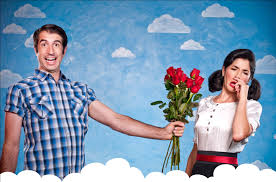 It can be hard to find the “right” way to express our love.   Not just between boyfriends and girlfriends, husbands and wives, or any of our other human relationships… How do we show our love for God? Is there a Valentine’s Day gift or card that would somehow be able to articulate I Love you Lord?’

If we look at what Jesus is saying in this entire passage from the Gospel of St. Matthew, we find that Jesus is telling us how to love our Heavenly Father. On first hearing, it might be difficult to take in. The imagery is harsh, the expectations seem impossible.   And I’ve had more than a few students over the years share how unsettling the passage, some of the verses can be to reflect on. But if we can sit with that uncomfortableness a bit, we can get to the deeper message.

The one and only thing that God hates… that Jesus hates is sin. Not simply because it’s a rejection of God, it’s a turning away from Him. But because of what sin does to us individually, and the effects it has on those around us. So Jesus tells us how we can demonstrate our love: If your right eye causes you to sin, tear it out and throw it away…if your right hand causes you to sin, cut it off…   No, there aren’t knives and saws in the back of the Church for us to make this a Valentine’s Day Weekend that God (or any of us) would never forget. Fortunately, even the thickest headed of men who loved Jesus – the apostles – realized that Jesus wasn’t looking for them to severely maim themselves.

But Jesus’ is using that dramatic example to get our attention to something important  God had given His people a covenant. He had said to them You will be my people… and I will be your God – and then He laid out His expectations of what that meant in the Ten Commandments. By following those ten laws, the Lord had said – His people would demonstrate their faithfulness, their love for Him. But people being people; humans being human we always are looking for shortcuts and loopholes… to do the least that we had to do. That’s why so often in moral debates of our day and time there’s ridiculousness on all sides of issues when it comes to how does a disciple of Christ apply biblical principles to present day situations. “There is no commandment about downloading songs for free off the internet…” True… but if we’re honest, if we dig a little deeper, if we reflect a little more, could we see how that’s sort of covered by “Thou shalt not steal?” Often times we try to find those loopholes and say “well technically Jesus never said anything about” and then follow it with whatever we want a “pass” on.   When we start doing that, we find temptation harder to resist as the devil, the “tempter” presents more and more things that on one level sound reasonable or logical – when in our heart and soul we know we’re trying to get away with something.

Which is why this Gospel is so real – it almost sounds like Jesus is fired up or being sarcastic: like he’s about to say ‘you think you’re being faithful? You think you’re loving my Father by doing what you’re doing? Jesus being fully God and fully human is able to speak even more directly to us: Pointing out the inconsistencies, the loopholes we’ve created. How we fool ourselves into thinking that if we were on trial we could say to God – Well Lord, technically we were following your commands… Technically we never took a gun or a knife and “killed” someone – conveniently forgetting the butcher job we did talking about people… Lord, when did I ever commit adultery – me and the people I fooled around with were never married… And so on. 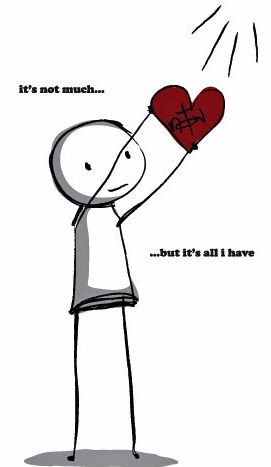 When we think about it – flowers die, candy is digested, cards – stuffed animals – gifts will fade and be discarded, even a night at the theatre will one day simply be a memory. In light of the fullness of life Jesus wants us to have right here, right now… Remembering the promises Jesus is offering us of the eternal life that is to come, what greater gift can we give to those in our lives that we care about not just on Valentines Day, but every day of our lives than to fall deeper in love with Jesus Christ?

Jesus is trying to help us in that pursuit. Moving out of living a relationship that is shallow into an authentically loving one. Which is why he uses ridiculous extreme examples like cutting off limbs that could cause us to sin to point out how ridiculous we can be. How we can fall into the trap of simply trying to fulfill an obligation rather than truly express our love. Because in the end, the body part that matters the most to Jesus is our hearts – our giving them completely to him, and He truly possessing them…living in them.