Last Sunday as we were preparing for our evening Mass on campus, the news broke about Kobe Bryant, the NBA All-star for the Los Angeles Lakers being killed in a helicopter crash along with his 13 year old daughter and 7 other passengers. Even those who aren’t sports fans or follow basketball seemed absorbed by this tragic story. The shock of such an unpredictable event – just an horrible, horrible accident seemed to catch the nation’s, even the world’s attention in a way that seemed to transcend the usual news of the death of a celebrity.

Welcome to my blog! This is my homily for February 2, 2020- THE PRESENTATION OF THE LORD. It means a great deal to hear from people, sharing how the Lord uses these reflections and the ability to share them online to speak to so many people all over the place! So thanks for your interest, for sharing this blog on your social media sites; and your feedback and comments! For the audio version you can get them at SOUNDCLOUD click HERE or from ITUNES as a podcast HERE. Thanks again – I hope you and yours experience all of God’s blessings today and always! In Christ – Father Jim

That was obvious at the Grammy Awards being held just hours after this news was confirmed in the very city and arena, the Staples Center where Kobe played his entire career.   At the start of the ceremony, singer Alicia Keys visibly saddened and shaken by the news expressed how she could never had imagined having to open what’s usually a high energy, upbeat program with such heavy, devastating news. She was joined onstage by the Hip-Hop group Boyz II Men singing their song “It’s so hard to say goodbye” which took on an incredibly somber tone. You had to admire her poise and the way she was able to lead thousands of people who were still in shock and trying to process the whole thing in real time on air. At the end of the song Keyes offered these words “We Love you Kobe… I know what we’re going to do what we’re here to do…join together in happy times, challenging together, sing together, laugh together, dance together, cry together, we’re going to bring it all together, we’re going to love together. We’re going to make sure that we are celebrating the most powerful energy the most beautiful thing in the world – the one thing that has the power to bring us all together – and that’s music…it’s the most healing thing in the world…” 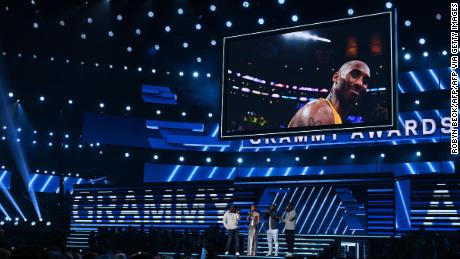 While I was really moved by Keys speaking and performing under such difficult circumstances, that last part left me a bit startled.   While I can appreciate that Keys wanted to be inclusive and sensitive to the many people who knew Kobe in the room or admired him from afar who were still processing this tragedy – and not to diminish the beauty of what music is and it can do for people…   there’s a limit to the impact that music has over people. We might be soothed, and comforted by music… we can have anxiety diminished and sadness abated by music. But when the music ends, the harsh truth of Kobe’s death and any other thing that we’re struggling with will still be there.   What then?

Those thoughts were on my mind and heart all week as I was reflecting on these readings for today’s Mass. Tonight the Church officially and finally closes the Christmas Season. Every year on February 2nd, which is 40 days from Christmas Day, the Church recalls an important day in the life of Jesus. When Mary and Joseph brought Jesus to the temple in Jerusalem to be consecrated to the Lord. Here they were entering this most sacred place, probably filled with lots of people who had come for a variety of religious reasons – some on pilgrimage, some for daily prayer. There were people who were there celebrating and in happy spirits as well as others dealing with profound sadness. All of them found themselves in God’s temple.

Mary and Joseph are just two more observant, faithful Jews entering this crowded space looking to fulfill what they knew was an important ritual. Immediately it proves much more dramatic…takes on much deeper meaning. We hear of that in this Gospel passage. First Simeon and then Anna. Two holy individuals. Two people who had seen and experienced themselves a great variety of joys and sorrows throughout their lives – on a global level with the sufferings of humanity on a much more personal level in their own lives as St. Luke offers specific detail that Anna had only been married for 7 years and widowed ever since to an advanced age…in her grief and mourning she had consigned herself to the temple. “She never left the temple, but worshiped night and day with fasting and prayer.” Both Simeon and Anna are described independently as “awaiting.” They were there looking for something, seeking something. They desired consolation, and restoration. They were longing for fulfillment. They awaited and hoped for redemption. 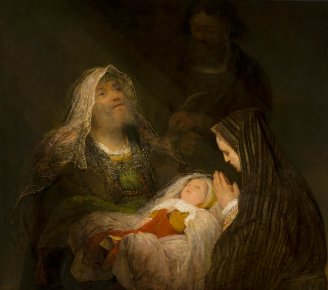 Of all the people that crowded that temple that day, with all their own different emotions, prayerful intentions, burdens and cares – Simeon and Anna, these two holy and devout elderly Jews are the only ones to notice Jesus’ arrival. They who had it placed on their hearts by the Lord that they would see God’s promises fulfilled are the ones who not only notice Jesus’ arrival but give thanks and praise and announce the good news that salvation has come – not just for them, not just for their fellow Jews – but “for all the peoples, a light for revelation to the Gentiles (the non-Jewish world) and glory for your people Israel (the fulfillment of the entirety of the Old Testament)

No, Jesus’ arrival isn’t meant to give false hope that bad things won’t still happen in the world. Simeon looks at the Blessed Virgin Mary, Jesus’ mother and tells her of future sorrows in the world with the fall and rise of many… noting the opposition Jesus will face, that Mary herself will experience suffering so great, it will pierce her very heart. But Anna quickly brings true comfort to those words pointing past that sadness to the fact that in Jesus, there’s a hope, there’s a life, there’s a redemption that surpasses anything we encounter and experience in the day to day, in this world of ours.

Jesus still offers us that true, eternal Hope. His presence in this “temple” – His presence in the temple of each of our bodies is meant not just to bring us comfort with those assurances – but the temple of the Church and our individual temples are meant to shine that light of salvation to all peoples. To those who are lost, those who are helpless and hopeless, to those who suffer, to those who mourn… Jesus’ light continues to cast His eternal love and life into the darknesses we experience and bring more than healing, but fullness of life and redemption.

Not long after I saw that clip of Alicia Keys with her tribute to Kobe Bryant, a priest friend of mine who is a fellow campus minister up at Boston University posted this on his facebook wall: As sad as Kobe’s death is, a friend texted me today to tell me that a friend of her’s attends the same Catholic Church as Kobe and saw him this morning at Mass. There can be nothing more consoling to those who mourn than to know that a loved one worshiped God right before his death because worshiping God is what heaven is.” The priests at Our Lady of the Angels Cathedral in Los Angeles corroborated that news. Kobe Bryant and his daughter who was Catholic had been at the Cathedral at 7:00 AM that Sunday Morning. They received the same Jesus that Simeon and Anna held in their arms and made their proclamations about thousands of years earlier in today’s Gospel… He is as real and present in the Eucharist. They had come to know and believed and received Him here on earth, and we pray to God for them and all the other victims of that crash that Jesus has now received them into His eternal kingdom of heaven.

In receiving Him, one of Kobe’s last acts and one of ours here today is to testify, to witness to the world that – the most powerful, most beautiful, the source of all healing is not music…it is Jesus. It’s in receiving and welcoming Him into our lives that makes it possible that even in death, we never have to experience how hard it is to say goodbye.

ST CORONA (or anyone) PRAY…

WE NEED GOD TO SAVE…

A FLICKER OF HOPE