A few years ago, a high school sophomore received horrific news that shocked him and devastated his parents: he was diagnosed with a highly aggressive, fast-growing brain cancer. Doctors rushed Brycen Newman who was sixteen years old at the time into emergency surgery to remove one brain tumor, only to discover three more tumors growing. Anytime we learn of someone who’s facing an illness, a disease – it triggers any number of thoughts, feelings, and emotions… but when it is something rare and shocking like this, striking a kid who we think should only have to worry about acne; passing that class; what he wants to do when he gets older – it understandably pulls on people’s hearts strings even more. Other parents will hear that story and realize that what is one of their worst nightmares has become a reality for Brycen’s parents.

Welcome to my blog! This is my homily for January 12, 2020- THE FEAST OF THE BAPTISM OF THE LORD. It means a great deal to hear from people, sharing how the Lord uses these reflections and the ability to share them online to speak to so many people all over the place!  So thanks for your interest, for sharing this blog on your social media sites; and your feedback and comments! For the audio version you can get them at SOUNDCLOUD click HERE or from ITUNES as a podcast HERE. Thanks again – I hope you and yours experience all of God’s blessings today and always! –
In Christ – Father Jim

As young Brycen underwent further surgeries, radiation, chemotherapy – his hopes of playing Junior Varsity football that year vanished. In the grand scheme of things, that might not have been something of great urgency to his family and doctors, but for a 16 year old, it was just another layer of disappointment being just another thing that would be taken away from him. Brycen’s football coach wanting to encourage and include him named him an honorary team captain. So week after week, Brycen would attend the games and sit on the bench with his teammates. Unfortunately a lot of his cognitive ability was limited after further brain surgeries – so Brycen would only be able to communicate in one word responses.

As the season wore on, the big Homecoming game was approaching – which is one of the highlights for the Football team’s seasons, one of Brycen’s good friends and teammates Jake Goddard had an idea. Jake met with the rest of the team and suggested that maybe they could all shave their heads in solidarity with Brycen. They all agreed and that’s what they did, before the Homecoming Game, they got the clippers out and shaved their heads clean, and suited up in their full uniforms and helmets. They went out to the field, and there was Brycen, completely unaware of what just happened, sitting on the bench. They invited him to come out for the coin toss before the game started. After the coin toss they all removed their helmets, as the other team captain said to him “Now you wear it proud, we’re all the same!” to which Brycen in his limited ability to respond said a simple but profound “Woahhh.”

His friend Jake explained “I thought it would be a good idea to shave our heads because it would make Brycen feel more comfortable with himself and his [lack of] hair [after going through chemotherapy]… But I also wanted to visually show him and his parents that he is not alone in this battle because we are a community, a team and friends to Brycen. We will fight along his side until he is cured.” (a video from YouTube of the story: https://www.youtube.com/watch?time_continue=222&v=UE0StRd2vR8&feature=emb_logo)

It was incredibly moving and impressive. So often young people are criticized as being self-centered, lacking empathy… But when you consider that for these kids at that vulnerable age and time in their life as high school students, when they are feeling more self-conscious about their looks and appearance (which has only gotten worse in this age of social media) for them to take this bold step and do something like shaving their heads – is tremendous. What they were saying – what they were doing is more than just a gesture of solidarity. In a bold way they say to their classmate – you’re not alone, you’re noticed, you’re cared for, you matter.

Everyone needs to hear that, experience that, know that….   Everyone has something that they are fighting or facing – whether it’s a serious illness like Brycen has to contend with, or something else that can feel equally as devastating: a loss, a setback, a failure. Whenever we’re in the midst of those dark nights, when we feel completely alone, or overwhelmed… When we think no one understands or cares – –

someone reaching out to you after you’ve experienced a loss;

an unexpected friend stopping by to see how you’re doing when you’ve been ill and laid up;

– they can all be life changing.    Experiencing in unique, personal ways the love of someone saying: you’re not alone, you’re noticed, you’re cared for, you matter – has a profound impact on us that transcends even whatever the pressing issue that was right in front of us. 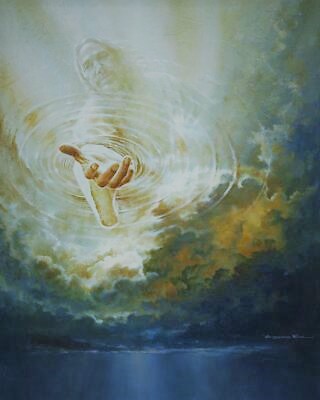 In a very real way, that’s what we celebrate today with this feast of the Baptism of the Lord. Throughout the Christmas Season which concludes today (despite the fact that decorations have been tossed for weeks now and Valentines Day candy were on the shelves starting on Christmas Eve!) we’ve been celebrating one of the greatest mysteries and treasures of our Catholic Christian faith – the incarnation. That God desired to become one of us and one with us. God the creator of all that is – created us purely out of love – and desires us to be with Him purely out of love. But He knew that could only truly happen when we, His creatures freely had the choice to respond to that love or (sadly) not. Seeing throughout history the effects of those who chose not to, who rejected God, His commands, listening to His voice – and the havoc that those sins and the effects of them had on the whole of creation – God knew the only way for us to be reunited, reconciled with Him would be for God himself to come and be one of us and one with us.

Throughout this Christmas season, we’ve reflected on that: First on Jesus’ birth – in poverty, meaning that He’s accessible to everyone. Then on Jesus’ family – showing that even though God transcends time, space and could arrive and appear in anyway possible he chose the most common and relatable experience to all of us being born into a family of human beings who weren’t perfect but holy. We’ve seen how Jesus’ arrival catches the attention of those outside his own religion and region meaning this arrival speaks to how Jesus truly is the way, the truth, the life – that Jesus is the Hope for all humanity.

Which brings us to today the feast of the Baptism of the Lord. How much Jesus loves us. In this Gospel, the people who were going out to John the Baptist for his baptism of repentance – they knew how messed up the world was, how messed up their lives were: They were upset by the missteps and mistakes of their ancestors that had led them away from what they knew God had commanded them to do. They were discouraged seeing what their leaders and those in authority were doing that were leading them in a different direction from the vision their loving Creator had in mind. They knew they themselves had not been “without sin”- doing things they shouldn’t have – not doing things they should…   There was no shortage of things that were diminishing and limiting them from the being the beloved sons and daughters of a Heavenly Father that they had been created, intended to be.

That’s why they were coming to John the Baptist to acknowledge these realities and to beg for God’s mercy. They waited with hope – and fear – for the Messiah to come who would set things right. More than likely they expected a great military champion – someone bigger than David with his slingshot knocking down a giant with a pebble who would become a king. They were way past that and knew things were far more serious at this point in history. For the Messiah, the promised one, the one the prophet Isaiah had said (in today’s first reading) would “establishes justice on the earth… [would be] a light for the nations…to open the eyes of the blind, to bring out prisoners from confinement, and from the dungeon those who live in darkness…” This one to come was going to be a very big deal. So they were hopeful and fearful awaiting His arrival, awaiting His ushering in this new era.

Yet what does Jesus do? How does he begin His reign? How does He reveal to the nations how God has become man, dwells among us to save us from our sin, from ourselves, from death? You’d imagine something dramatic like the Transfiguration should happen – amazing sights like Moses and Elijah appearing, lights and sounds, God the Father’s voice like thunder. Things that would leave everyone lying prostrate– hoping for his merciful forgiveness and then obediently following him, thankful just for another chance.

But no… What happens? Jesus gets on line with the sinners. He enters waters of repentance that He doesn’t need – to be near to those of us who do. He with complete humility continues to choose to be one of us and one with us – and meets us in our brokenness, in our guilt and shame. He’s right here with us in our lowliness. Like those boys shaving their heads for their sick classmate, our Lord and Savior Jesus Christ does this for us. And this to is more than just a gesture of solidarity. In a bold way Jesus says – you’re not alone, you’re noticed, you’re cared for, you matter.

If we take these words to heart… If we decide to embrace Him who looks to embrace us … If we choose to follow Him who came to seek and find us – Jesus makes it possible for us to hear the Fathers voice ourselves… as He looks at each one of us, saying “This is my beloved Son, This is my beloved daughter with whom I am well pleased.”