A few years ago on a Friday morning, a young man entered the Metro station in the heart of Washington, DC shortly before 8am. Casually dressed and carrying a violin case, he stopped took out his violin, threw a dollar into his opened case, and started playing classical music. He began with six very difficult, yet beautiful, pieces by the classical composer J.S. Bach. On a normal weekday, approximately 2000 people pass through that station between at that hour, most of them on their way to work. It took three minutes before anyone even noticed him.   A middle-aged man stopped briefly and hurried on.   4 minutes after that a woman threw a dollar into the carrying case, but didn’t stop.   Ten minutes after that a three year old boy tried to stop and listen but was dragged away by his mother.

Hi everyone! This is my homily for January 5, 2020- THE EPIPHANY OF THE LORD The readings for today’s Mass can be found HERE –  Thanks as always for reading; particularly grateful for sharing this blog on your social media sites; and your feedback and comments. I appreciate it! Have a great week – God Bless – Fr Jim. AUDIO . Also you can get the audios of the homilies from iTunes as a Podcast: https://itunes.apple.com/us/podcast/fr-jim-cherns-homilies/id1440618142?mt=2

After 45 minutes of playing, a total of six people had stopped and listened but only for a brief time. The young musician collected a total of $32. After he had been playing continuously for over an hour, in which easily over 1000 people had passed by, he stopped playing. No one noticed, applauded or gave any form of recognition or appreciation.

This mysterious street musician actually turned out to be a world renown concert violinist named Joshua Bell and the Bach pieces he played are some of the most intricate pieces of music ever written. He played his Metro “concert” on a Stradivarius violin which is worth $3.5 million dollars. Amazingly, three days prior, he had played a sold out concert at Boston’s Symphony Hall where the average ticket price was $100 to easily over 2,500 people…

Bell’s gig as a street musician was part of a social experiment about concept, perception and priorities that was conducted and videotaped by The Washington Post. They wanted to know: In a common place environment at an inappropriate time – do we perceive beauty?; Will we stop to appreciate it? Can we recognize talent in an unexpected context? 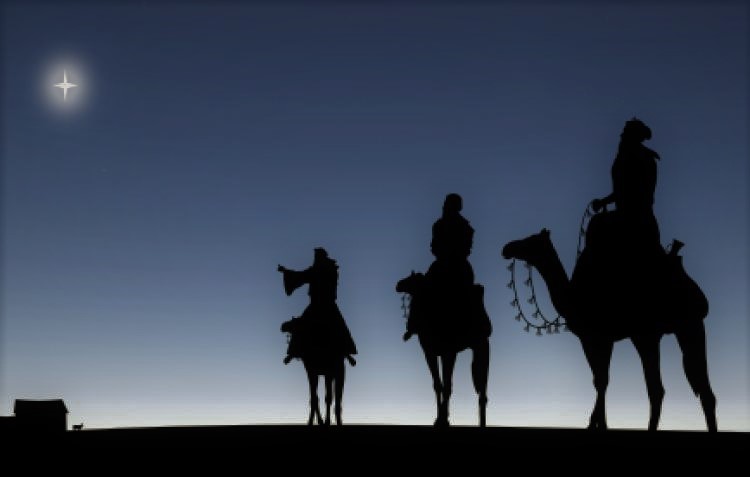 Today we celebrate one the last feasts of the Christmas season. It’s ironic that most of the world has already moved on and “dropped” Christmas. Yet, today’s feast is an essential part of this season- the Feast of the Epiphany of the Lord. The word epiphany in Greek means appearance or manifestation and refers to the manifestation of Christ to the Gentiles, represented by the wise-men we just heard about in the Gospel. Guided by the appearance of a star, these non-Jewish visitors, these Magi traveled a great distance in search of the newborn baby who was foretold to be the King of the Jews. They weren’t quite sure what they were looking for or what to expect. They recognized something in the cosmos that had captured their attention – a star. Why would the birth of royalty of a distant land and people be reflected in such a way… Why would the King of the Jews be of such importance to these gentile visitors? Their fascination, their curiosity spurs them to set out and see for themselves. Something in their hearts told them this was important to do. And when they do, they find the baby Jesus – with his Mother Mary, in the home of Joseph a carpenter. By all appearances couldn’t have been more common, more inappropriate for a King: amongst the ordinary, the poor. In an unexpected time and in an unexpected context: It is there that they find the King of the Jews – they recognize something they couldn’t quite comprehend as they beheld the Word of God made flesh, – God, the very source of all that is Good, True and Beautiful, was made manifest.

Yet, it seems very few took notice of this arrival, appreciated His presence.

That would be a recurring thing not just in his birth and infancy, but throughout Jesus’ life. The Gospels show throughout Jesus’ ministry and teaching, even in the face of spectacular miracles how the Scribes and Pharisees along with a vast majority of people of that time and era would miss this, miss Him.    In the Christmas commemorations we know that there were some who “got it”: certainly Mary and Joseph did; the shepherds got it, as did these Wisemen. Even Herod got it to a certain extent, sadly not with appreciation but rather with fear and jealousy.  But for the many, this “Glory of the Lord” that was shining was missed.

Which is surprising. Because we heard in that first reading how Isaiah had predicted this dawn of light a few hundred years earlier.   So people should have been looking for it, expecting it, anticipating it…   But for the most part, people were most likely distracted by their own concerns and the usual tasks of everyday life to take notice of the true beauty that was radiating right there in their midst.   Kind of like thousands of people missing a world renowned musician playing beautiful music as they race to catch a subway train on a typical Friday morning.

In our celebration of the Epiphany today we are reminded of the need to continue to seek Christ. To not take it for granted that our being here means we’ve “found him.” Because too often we can fall into that mind set and limit Jesus’ presence and activity to something we just do here on a Sunday (or Saturday Night).   Yes, He reveals himself here in a somewhat common and what many in the world would find inappropriate way: bread and wine becoming Jesus’ Body and Blood and offered for us commoners to consume doesn’t exactly match up to what people would expect as the place to encounter God.   Yet our faith has made this miracle somewhat commonplace to Catholics. Sadly to the point that, sometimes, we don’t even fully appreciate the radiance of this beauty that we receive on a regular basis.

But beyond these walls, beyond this Eucharist – How often do we recognize how Jesus continues to make Himself manifest in our daily lives? In our world that’s strangely become closer in terms of communication, we as a society seem to be becoming more isolated. Judging and lumping people into categories that allows us to remain indifferent to one another. Yet what if we stopped and thought for a moment that all the people we encounter, all of the different relationships, situations and experiences we have as ways that Jesus is revealing his presence to us? Calling us out of ourselves, to stretch ourselves… So yes, that annoying co-worker perhaps is an opportunity for us to be charitable and patient (recognizing how Jesus is incredibly charitable and patient with us). That sick person who “yeah I’ve been meaning to reach out to,” is that face of the suffering Christ who longs for our compassion. Jesus manifests Himself in the people and circumstances of our everyday life, yet, so often we fail to see Him in those ordinary and sometimes unexpected contexts.

Epiphany calls us to “set out” to encounter Jesus Christ but perhaps in a way that moves us out of the walls we’ve confined God to. In that, the Magi who we celebrate with this feast can help be our guide. Pope Benedict XVI a few years ago said of the Magi, that they were: …men with a restless heart. Men driven by a restless quest for God and the salvation of the world. They were filled with expectation, not satisfied with their secure income and their respectable place in society. They were looking for something greater. They were no doubt learned men, quite knowledgeable about the heavens and probably possessed of a fine philosophical formation. But they desired more than simply knowledge about things. They wanted above all else to know what is essential. They wanted to know how we succeed in being human. And therefore they wanted to know if God exists, and where and how he exists. Whether he is concerned about us and how we can encounter him. Nor did they want just to know. They wanted to understand the truth about ourselves and about God and the world. Their outward pilgrimage was an expression of their inward journey, the inner pilgrimage of their hearts. They were men who sought God and were ultimately on the way towards him. They were seekers after God.

That’s one of the final gifts of the Christmas season – to realize that the celebration of the coming of Jesus Christ – Emmanuel – God With Us – is meant to open us to experience something new. To speak to that restlessness that we can experience in our own lives, in our own time.   But we have to be honest and open about that in order for anything meaningful to change, for us to have a meaningful encounter with God.

Thinking back to that experiment of experiencing Joshua Bell’s beautiful music in a common an inappropriate context – in that train station during morning rush hour – I can pretty much guarantee I would have walked past him as he performed his beautiful music (at 8 in the morning, most likely I would be searching a Dunkin Donuts for coffee than anything else). And like the thousands of others who passed by, it would have been a true loss not to take in such a gift. I’d allow the noise and busyness of life to distract me from something that could speak to deeper needs and desires that need attention.

God wants to speak to our inner restlessness. He wants to reward our desire to find Him as He did the Magi.   May we set out as we leave this place with hearts and minds attuned to how Emmanuel: God-with-us – continues to manifest himself  – radiates His glory – offers us opportunities of encounter that we might not be expecting in common, inappropriate, unexpected ways.  May we not be too busy to notice them.