Latest News
Home /Blog/“COMPARISON IS THE THIEF OF JOY”

How often have you thought to yourself I wish. I wish I had that job. I wish I had that house. I wish my family was as happy as that family. I wish we didn’t have this problem to face. There’s an understandable very human aspect about these things which everyone of us faces – but as is often the case with every human feeling, emotion or experience, it’s what we do with those feelings that makes a fundamental difference in whether we’re going to be joy filled, thankful people or whether we’re going to let that turn to resentment, anger, or bitterness.

Hi everyone! This is my homily for December 29, 2019 – THE FEAST OF THE HOLY FAMILY The readings for today’s Mass can be found HERE – (Midnight Mass readings) Thanks as always for reading; particularly grateful for sharing this blog on your social media sites; and your feedback and comments. I appreciate it! Have a great week – God Bless – Fr Jim. AUDIO . Also you can get the audios of the homilies from iTunes as a Podcast: https://itunes.apple.com/us/podcast/fr-jim-cherns-homilies/id1440618142?mt=2

For example, Christmas night – stupidly I clicked on twitter at one point (I’m so programmed to check to see what’s going on that I didn’t even think that it was going to upset me) and one of the things that was trending was people angry that they didn’t get Apple’s AirPods for Christmas. That either they got a cheaper version of the almost $200 wireless headphones – or they witnessed another relative get them while they didn’t. It was really beyond sad to see adults having very public, virtual temper tantrums over such a stupid thing.

The thing is – while it can be obvious in an instance like headphones (or perhaps it’s more accurate to say that it should be obvious) – we don’t often realize how often that temptation exists for each and everyone of us – and in other areas of our lives. Not just to have “wishes” but letting the enemy of comparing ourselves to others to diminish, to demean, to undermine who we are, what we have been blessed with, what God is doing in our lives. As one couple compares their marriage to another marriage… As parents judge how their families are doing by putting themselves up against another… – very quickly these things can undermine our interior peace. 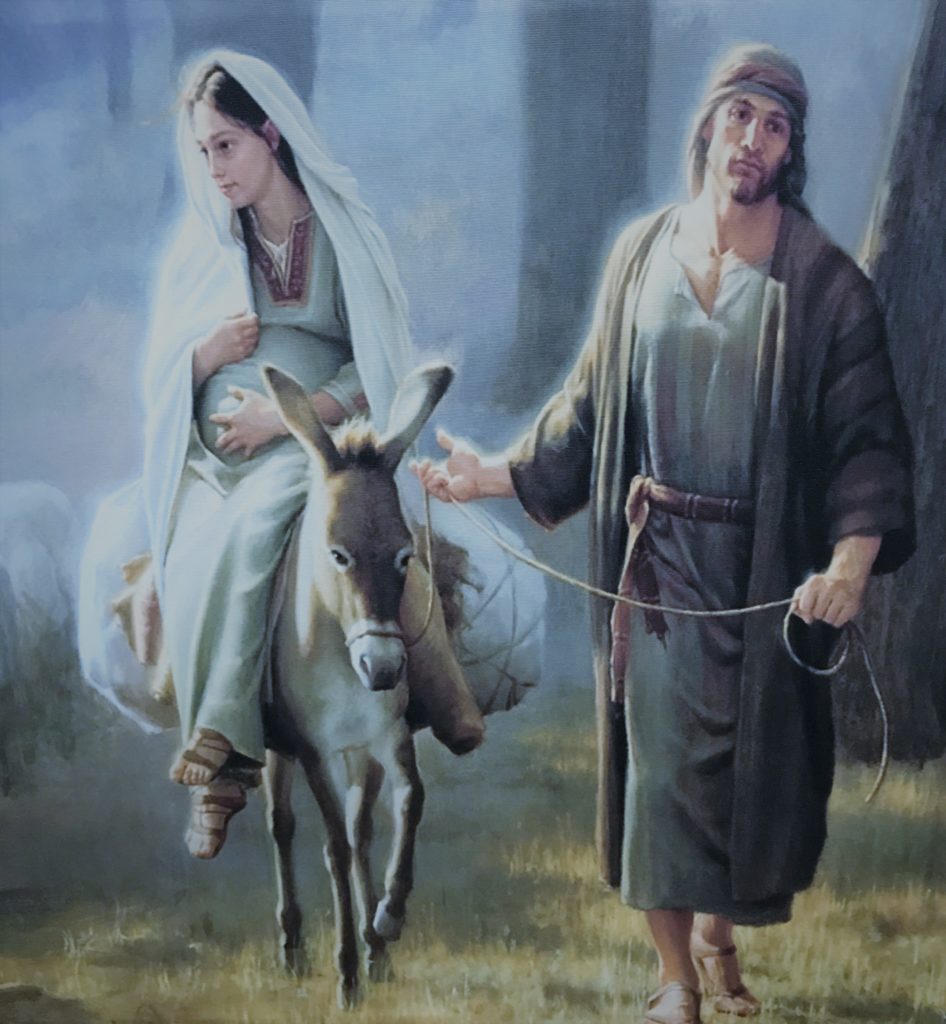 It’s why today’s feast day, smack dab in the midst of the Christmas season is such an important one for all of us: the Holy Family. In this intimate of homes with Jesus, Mary and Joseph – we find the antidote to that enemy of comparison. So often, we’re used to thinking of them as St Joseph, the Blessed Virgin Mary – and Jesus Christ, the Son of God… we look at those titles and exalt them, and their lives as “perfection.” But we celebrate the Holy family not the Perfect Family. Just a quick recollection of the Christmas story reminds us of how imperfect things were right from the get go. You would think that in Joseph and in Mary’s saying Yes to God – that things would be without stress or difficulty. That their sacrificing their desires, their dreams, their wishes in favor of God’s would in clear the deck of obstacles, trials, challenges.

Yet the complete opposite happens. From having to embark on a 90 mile journey to Bethlehem on horseback with an 8 and a half month pregnant Mamma Mary – to not finding any lodging, to the Gospel of today where we hear of the maniacal Herod searching to destroy the “newborn King” and going about killing every innocent newborn baby that causes Joseph to take the vulnerable family into Egypt then back to Nazareth…

It would have been very easy for both Mary and Joseph to doubt themselves. Had moments where they compared themselves to someone else thinking so and so would’ve done this better… I bet they wouldn’t have let that happen. She would have been more qualified; He would’ve been more talented and creative… They would’ve had a better plan a better idea…

If they did have those thoughts – they were fleeting ones. Because the babe, the child in their midst was God himself. As an infant, entrusted to them, He was vulnerable and in need. And this baby, this child doesn’t give them time to stay self-focused… to allow those comparative thoughts to take root and grow into full fledged doubts, fears, regrets. Instead Mary and Joseph had to constantly keep their hearts and visions on the Lord – to continue to rely on God’s promises, on His favor and blessings. They had to trust in His word and His guidance to keep directing and re-directing their steps in order to raise this precious child. With that, almost without even thinking about it, they constantly rededicated themselves to putting God first and foremost in their lives. A great spiritual director once put it this way. He said “Life is a lot less about what your facing and a lot more about where you are looking.”

May we follow Mary and Joseph’s example. As parents of the newborn… and as the miracle of the Christ Child living with them that they constantly cherished as the precious gift that He was – that He is – they continued to look to Him with whatever it was they were facing. They kept Jesus in the center of their individual and their married lives. That is what made them a Holy Family. That is what can make us and our families holy as well.