As a priest, I know that Easter is the more important holiday. Because quite simply, if Jesus had not risen from the dead, no one would care about his birthday to celebrate it.   But it doesn’t really feel that way, does it? We seem to have more elaborate decorations for Christmas…There’s really no contest between a Rockefeller Christmas tree for Easter. No offence but Santa totally beats out the Easter Bunny… Even culturally there seems more family and food traditions around Christmas then Easter.   In my Italian family we grew up having 7 fishes on Christmas Eve… now that my brother has taken over the tradition, he might have gotten creative over the years and make a Paella so he can knock 5 out at once and then have some shrimp and calamari but we know – Christmas Eve is fish… Easter we never had something set in stone like that.

Hi everyone! This is my homily for December 25, 2019 – THE NATIVITY OF THE LORD – CHRISTMAS DAY The readings for today’s Mass can be found HERE – (Midnight Mass readings) Thanks as always for reading; particularly grateful for sharing this blog on your social media sites; and your feedback and comments. I appreciate it! Have a great week – God Bless – Fr Jim. AUDIO . Also you can get the audios of the homilies from iTunes as a Podcast: https://itunes.apple.com/us/podcast/fr-jim-cherns-homilies/id1440618142?mt=2

Even television specials – I bet it would be hard for us to think of more than two or three Easter specials that were ever even made. When you ask people what is they’re favorite Christmas special, get ready for a debate. The students I work with at Montclair State University for one of our last “Newman Nights” – our weekly gathering as a community – they were going to have a Christmas movie night. But it got into such a debate – who wanted Elf, who wanted Home Alone, the argument is Die Hard a Christmas Movie?? … some traditionalists arguing for “It’s a wonderful life” or “A Christmas Carol.” In typical college student fashion they decided to scrap it and do a Christmas Karoke night.

When I told my two brothers about this debate – they offered their favorites from childhood – My brother Craig said Nestor the long eared Christmas donkey… I have to admit I had to look that one up online – had zero recollection of it. But then he said “or Frosty” (to which my brother Chris added he liked that one so he could watch him melt) – which prompted Craig to counter “or How the Grinch stole Christmas – that was always a favorite” (I think because he argued my brother Chris was similar in personality to the Grinch). Chris added “The Year without Santa Claus” – you know the one with Snow Miser and Heat Miser. I think the fact that it had two brothers fighting is what made that a favorite for him. 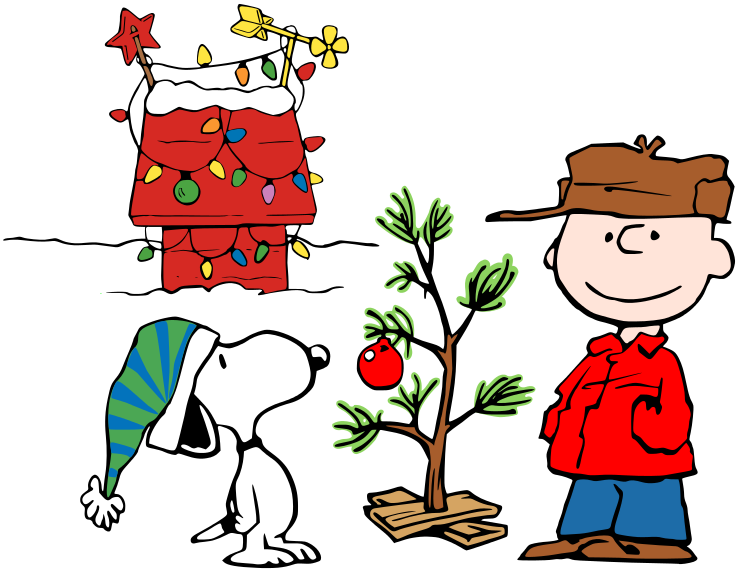 In any event – whether it was with my students or my brothers – none of them offered my favorite: “A Charlie Brown Christmas.” My brothers imitated the adults talking “WAH WAN WAH WAHHH”   My students – God help us all, I had a couple who said “I’ve never seen it.” I know I launched into a rant about how Un-American, Un-Christmasy they are… how there’s no excuse as – unlike when I was growing up it was only on once a season – now its on demand, its on DVD, it’s on at least three or four times every December… what is wrong with these people.

One kid who’s in a film production major at MSU went through a list of things that were wrong with the Charlie Brown Christmas special (so at least he saw it). He pointed out that when Charles Schulz made the special it was rushed, so theres inconsistencies in the drawings, and errors in the animation… that its almost embarrassing by today’s animation standards and went so far as to suggest that they should re-animate the whole thing.

How I didn’t quit working with these blasphemous kids right then and there, I’ll chalk it up to a Holy Spirit moment. First off – they know not to trash talk “Peanuts” in front of me. They want to make fun of Disney stuff or other childhood cartoons, I’ll laugh along… But you start picking on my buddy Snoopy – Charlie Brown and all the others, there’s going to be a fight.

I grew up reading those cartoons. The books I took out of the library growing up were cartoon collections of Peanuts (explains a lot, I know). So I know pretty much every character – from Snoopy’s siblings Spike and Olaf and Belle – to Lucy and Linus’ baby brother Rerun who only really made a regular appearance in the strip 35-40 years after it debuted. So yeah – they are characters that remain near and dear to me – as demonstrated by the number of stuffed Snoopy’s I have and Peanuts shirts I own.

A Charlie Brown Christmas has always been a favorite of mine, more than just because I’m a huge Peanuts fan. Sure, I love the whole thing… as a kid – just seeing Snoopy decorating his dog house, Lucy demanding to be the Christmas Queen at the Pageant, Charlie Brown and Linus looking at aluminum trees (I remember as a kid asking my parents if we could get one of those since they looked neat)… and of course the bizarre dancing scene… as a kid, seeing this special every year kind of kicked off the the Christmas season for me. As the years went by, I always appreciated that Linus, who throughout the comic strips history was always a budding theologian to the other kids – would read this Gospel that we just did – when Charlie Brown in all exasperation asks “Isn’t there anyone who knows what Christmas is all about?” And he reads the real Christmas story from St. Luke.

But it wasn’t until years and years later that someone pointed out to me a very subtle point that made this special so completely perfect to me and would be hard for anyone to convince me that there’s any other Christmas Special that could beat it. In fact it made me appreciate it even more.

Throughout the history of the comic strip Peanuts, Linus is seen carrying, dragging with him his “security blanket.”   If you read every strip – as I have – you’ll know he’s mocked for always having it with him… the times he tries to “break the habit” of holding it he goes into a tail spin almost instantaneously. There’s a time when Linus’ grandmother and his sister Lucy conspire to cure him of this crutch which almost results in a breakdown – an episode which shows the little guy growing a spine and sticking up for himself basically confronting them, taking it back and angrily defending himself in the face of people trying to change him. Even in this Christmas special, as Lucy hands out the parts she says to her brother “you’ve got to get rid of that stupid blanket…” He says “well this is one Christmas shepherd who’s going to keep his trusty blanket with him…” 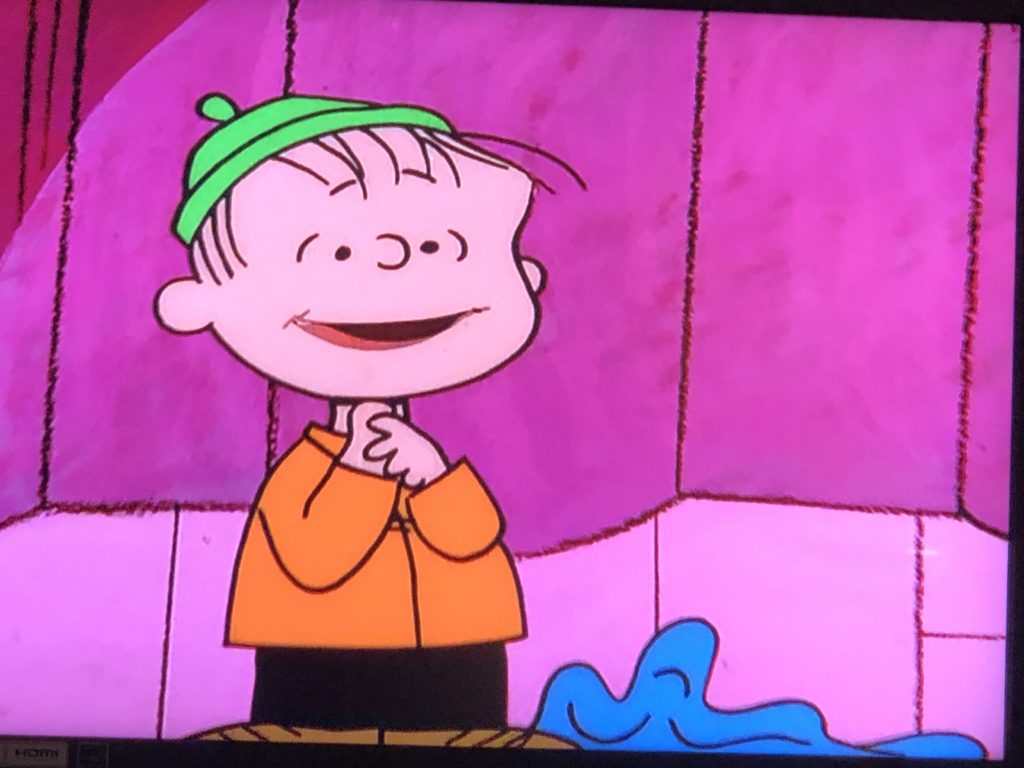 All of those instances in the strips 50 plus year history makes it even more profound that as he tells all those gathered what Christmas is all about – and proclaims this Gospel passage we just heard – he does a small but not insignificant thing – he drops his security blanket.   Even more telling is that the exact moment he does it is precisely when the angel of the Lord appears to the shepherds and tells the shepherds “Do not be afraid, for beold I proclaim to you good news of great joy that will be for all people. For today in the city of David, a savior has been born for you who is Christ and Lord.”

For the little guy who even Snoopy is never able to pry his trusty blanket away from, these words of scripture break through his tiny world to tell him that Jesus Christ has come to separate us from all fear.   Just let that sink in.

Despite the joy filled celebration that Christmas is, no doubt that everyone of us has something (or many things) that fill us with fear. Many come into this Church hoping for a miracle that will instantly rectify whatever situation it is that’s weighing us down or hoping to simply suppress those things deeper and deeper “just for Christmas.” Linus reminds us the true meaning of Christmas is that – Jesus comes to save us from any and everything that causes us fear and discouragement. In Jesus, God becomes man, dwells among us, stays with us and makes himself accessible and in reach. In Christmas we can approach the purity and innocence of Jesus as a newborn baby who can only communicate with looks and gazes of love. In Jesus’ birth, the Creator of the universe comes to tell you – you are known, you are loved – you have been and you will be for all eternity. That’s why we have nothing to fear.

And if we can, like Linus, drop our blankets of security – the things that we constantly look to for assurances, for relief, and grasp this baby – and learn to trust and cling to Him – as the man who died and rose from the dead for us – and dare to receive Him who’s as real and present as he was in that stable as He is in the host we receive in the Eucharist, the Body of Christ that we are invited to take and eat – we find Him constantly reassuring us “Do Not Be Afraid” to whatever it is that distracts, that unnerves, that frightens us.   That realization ends that Peanuts special with all the characters in joy and singing. That truth can make it possible for you and I to also have a truly Merry Christmas.