Latest News
Home /Blog/STRAIGHT TALK TO BRING OUT THE GOOD

Not too long ago, sitting in a doctors office waiting room, frustrated that I had forgotten to bring some work with me and not getting great cell service that I could catch up on words with friends games or something mindless – I ended up picking up one of their magazines. Who knew they even made these things anymore? The assortment the office had didn’t have a lot of options. There was Oprah’s magazine with her on the cover, once again… People magazine…Entertainment weekly… the most “masculine” of the assortment was Esquire. As I flipped page by page, I came on this story about a Hollywood actor who’s name really wasn’t familiar to me (must be getting old) Shia LeBeouf. What-a Le- What? Anyway the headline writer wins. “Shia LeBeouf is ready to talk about it – the actor sets out to save his career – and his soul.” Got this priest’s attention.

Hi everyone! This is my homily for December 8, 2019 – THE SECOND SUNDAY OF ADVENT The readings for today’s Mass can be found HERE Thanks as always for reading; particularly grateful for sharing this blog on your social media sites; and your feedback and comments. I appreciate it! Have a great week – God Bless – Fr Jim. AUDIO – will be posted at: https://soundcloud.com/frjimchernshomilies. Also you can get the audios of the homilies from iTunes as a Podcast: https://itunes.apple.com/us/podcast/fr-jim-cherns-homilies/id1440618142?mt=2

Long story short -it’s sadly a very typical story out of Hollywood – particularly for someone who was a child actor, who at the age of 21 was being called“The Next Tom Hanks.” As is often the case, the celebrity, the ups and downs of his career, the public eye, the public scrutiny, and not knowing how to balance or deal with all of it had the reporter characterizing him as “the guy who was handed a golden ticket and promptly lit it on fire.” 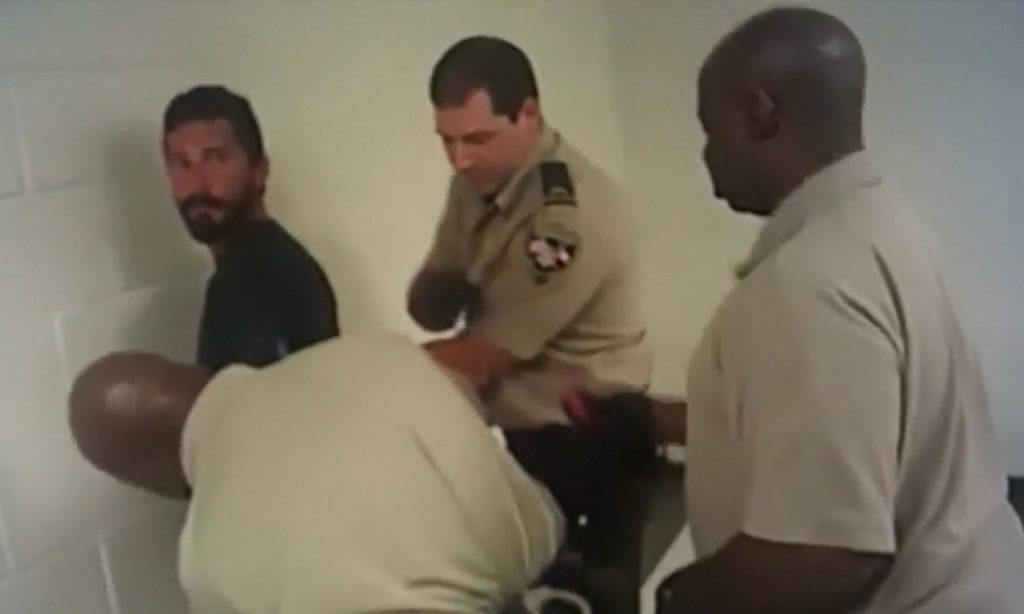 While there’s been a history in LeBeouf’s career of embarrassing stories surrounding his abuse of alcohol, what was the breaking point and put him in the spotlight as possibly the last straw took place in the Fall of 2017. He was filming a movie in Georgia and was out partying late one night. At 4:00 in the morning, a highly intoxicated LeBeouf stumbled upon two strangers looking for a cigarette. They turned him down and he didn’t take that well. One of them happened to be a Police Officer who tried to get him to calm down. Things continued to escalate – he was arrested – as he got to the Police Station there was footage of him getting processed, and with each moment, he just got more and more belligerent. From screaming about his millionaire lawyers, to mocking a cop who was black, and just getting more hostile and vulgar. Unfortunately television programs like TMZ love footage like this – and got it – and aired it with all of their bleeps and on-screen graphics and stuff.

The day after, he returned to the set of the movie he was filming for a cast party. The entire room filled with actors, production staff, creatives and no one said a word… except one actor – his co-star Zach Gottsagen, a young man who has down-syndrome. Zach who was so angry and hurt by what had happened that as soon as he saw LeBeouf he got into his face and said “You’re already famous. This is my chance and you’re ruining it for me.” LeBeouf explained that hearing Zach say “that he was disappointed in me probably changed the course of my life,” LaBeouf says. “ ’Cause I was still fighting. I was still on my ‘Look how fast they released the videos! They don’t release these!’” and kept sulking out of self-defense-mechanism-fear garbage. But reflecting on the conversation with Zach he said “you can’t do that to him. He keeps it one thousand with you, and that [stuff] doesn’t even make sense to him. Zack can’t not shoot straight, and bless him for it, ’cause in that moment, I needed a straight shooter who I couldn’t argue with.”

As the 20 minute conversation continued, and his defenses fell, they sat next to each other and Zach put his hand on his shoulder, and for LeBeouf he said that allowed him to acknowledge some painful things from his past, to let go and to move forward. He made a decision then and there to stop blaming, scapegoating, being defensive and to see and hear this pure goodness in his co-star and to want to make a change to try to reach for that ideal himself.

All of us need reminders from time to time of “the ideal” “the good.” In the day to day it’s easy to let stresses, failures, tension to weigh us down… it’s easy to let our own sinfulness and temptations we struggle with to diminish our views of ourselves and the world around us. And so we need to have our hearts, our minds, our sights and visions lifted from ourselves, the things around us and to ask ourselves what will bring out the good in us?

This second Sunday of Advent – as we continue to focus on the three comings of Jesus Christ – at Christmas, at the end of time, and in the here in now… or to make that more personal – how Jesus has come into our lives in the past, how he will come to us at the end of our lives – and how he comes and meets us here and now – these scriptures are meant to recast God’s vision for us of the “ideal” of “the good”. On the surface the readings from Isaiah and the Gospel of St. Matthew, probably sounded a bit too unrealistic, too off putting.

In the first reading we’re hearing about a wolf being a guest of a lamb, leopards lying with kids, calves and lions browsing together with a child guiding them – cows and bears being neighbors and baby’s playing in a cobra’s den… that’s right – A Cobra’s den. You could be forgiven for thinking “what was Isaiah on that day?”   We don’t see how any of that is real how any of that is possible – so our impulse is to dismiss it.

Similarly in the Gospel reading – we hear about John the Baptist – this guy wearing camel’s hair, eating locusts and honey living out in the wilderness. He calls the religious authorities of the day “vipers” and calls the rest of the listeners to “Repent for the kingdom of heaven is at hand.” Again, it’s not shocking that some might be initially dismissive of this rather eccentric guy and wonder – “Uhhhh… what?”

Isaiah’s prophecy of this ideal, peace-filled vision probably seemed as far-fetched to his first hearers as it does to us. But part of the reason that’s the case is that we rarely see the goodness of the world that God created – the goodness of one another. We are hurt, angry, frustrated by things, people, events – which often results in us responding in equally hurtful, angry, frustrating ways.    It’s why stories like Shia LeBeouf’s resonate. Reading details of his life story, one can appreciate how the many different wounds and set backs have afflicted him to the point that he had this very public and embarrassing breakdown. But through the no nonsense, direct confrontation of his co-star who’s able to break through the layers of defense that he was holding onto and lovingly call him out, he was able to own his failures and change his life – crediting this whole encounter as saving him.

In that example we have a glimpse of Isaiah’s even more expansive and glorious vision of a peace-filled earth that the Messiah will usher in. But in order for that to happen, we have to want that vision to be our vision. And we have to make our vision, our mission.

Which is where John the Baptist picks up. We hear these kind of stark words from the prophet ”Even now the ax lies at the root of the trees…every tree that does not bear good fruit will be cut down and thrown into the fire…” not exactly sounding like he’s in the Christmas spirit (someone get John a candy cane). But he’s trying to get us on the right path to the true meaning of Christmas. Not our pretending like Jesus is going to be born again in Bethlehem to Mary. That happened 2,000 years ago. But rather our bringing Christ to birth here and now.  We do that when we start to repent of our pettiness, our grudges. We do that when we reach out to those we’ve been estranged from.   When we become prophets ourselves and engage in the hard work of bringing some peace, some compassion, some mercy into this world around us. To play the roles of John the Baptist and Isaiah in our homes, workplaces, campus.

May we hear the challenge of the season of Advent that calls us to celebrate, to uphold, to seek out and call attention to all that is good in God’s creation… recognizing how Jesus has reconciled all creation and revealed God as our Loving and Eternal Father.  Then we will remind others – and maybe even remind ourselves – of the good there is inside us. 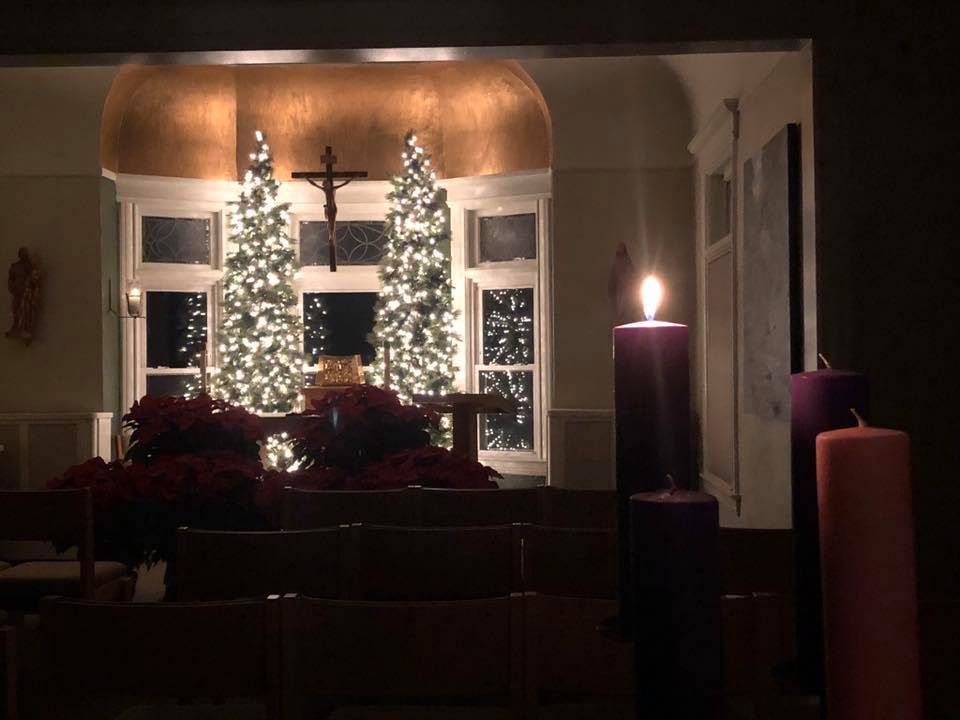 QUICK COMMERCIAL – Thank you to everyone who’s donated to Red Hawk Catholic / St. John Henry Newman Catholic Center at Montclair State University on #GivingTuesday towards our Annual Christmas Appeal… We’re over 75% of the way towards our goal of $15,000.  Appreciate you’re considering making a gift – read more at: http://www.redhawkcatholic.com/christmas-appeal/  THANK YOU!